It’s our 54th Autostraddle (not so) Anonymous Sex Toy Review! Over the last few years, sex toy companies and stores have asked us to review their toys in exchange for, you know, their toys.

This week, I tried out the Womanizer, sent to us by Good Vibrations. 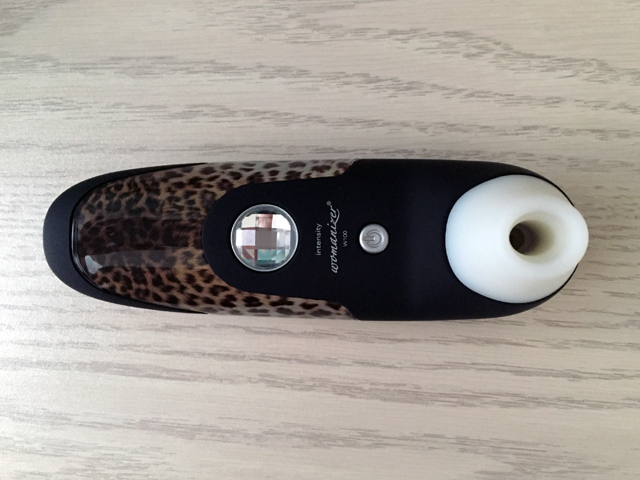 yes that is leopard print and a fake gemstone

When I opened it, I looked at the Womanizer skeptically. It’s called the Womanizer, for one thing, which is gross for at least two reasons. Leopard print and an enormous plastic jewel are involved. It feels light to hold — not in a sporty way, but in a cheap way, especially to someone market trained to expect better sex toys to feel weightier for their size. It’s not waterproof. The contrast between the shiny parts of the toy and the matte parts of the toy feels weird and not good.

In short: I was prepared to be bored by it, and definitely not prepared to take it seriously.

Then it made me come in under a minute on the lowest setting. Five times in a row.

The Womanizer is not a regular vibrator. Instead, it uses something that feels like suction, with just a little vibration. There’s a little silicone head that sits over your clitoris, and when you turn it on it applies suction and vibrates just a little. I tend to play with new sex toys in my hands before putting them near other body parts, and against my palm the suction felt like almost nothing. Against my clit was another story. Even so, I would rate the suction on a scale of “lighter than a human would ever have patience for” to “medium, maybe.” If you enjoy oral of the type where someone is treating your clit like a lollipop they’re trying to pull off the stick then the Womanizer is probably not going to be for you.

I also found that the toy made the normal rules of my clit stop applying. I normally am too sensitive for direct clit stimulation, and use even targeted vibrators just sort of in the area instead of directly on my clit, but I had no sensitivity problems just letting the suction do its thing.

The manual advises that once the toy is in place not to move it, and that you can tell whether it’s in place by the sound, which I found to be the case — it’s way quieter when there’s a seal than when there isn’t. I normally like to interact a little more with my sex toys, by which I mean writhe around instead of laying totally perfectly still, and so having to lay totally perfectly still was a little frustrating. Trying to keep the Womanizer in place while using a dildo was a challenge, though a doable one, and I imagine using it during partner sex would be difficult for the same reason. (If you’re all about staying still, either because that’s just your jam or because you prefer to be tied up or ordered to not move, I can see this toy being excellent.)

It’s light, and after I got over reading the lightness as cheapness I enjoyed that I barely noticed holding it. Because the very end of the toy sits right over the clitoris, it also leaves room for toys or fingers or a strap-on or other action. The size did, however, interfere with the position I used it in — the body of the toy was too tall to allow for lying on my stomach, so I had to use it sitting up or lying on my back.

I’m still not a fan of the light water resistance that means I have to clean it with a damp cloth and can’t use it in the shower, the seams all over that make cleaning harder than it needs to be, the aesthetic, and the name. I’m grossed out by the fact that the manual calls the suction head the “treatment head,” because women’s sexuality is medicalized enough. I don’t love the equation of people with clitorises and any gender, or with extreme femininity. I don’t love that it probably wouldn’t work as well for people with larger clitorises. And I don’t love that the toy smelled just a little out of the box – it’s ABS and the cap is silicone, but it’s not listed anywhere as 100% medical silicone, and if it continues to smell after I’ve had it a little longer I will be concerned.

I like that it comes with a hard, if bulky, case for storage, and with an extra suction head (the head is removable for cleaning; I appreciate the extra for a quick switch between partners or in case I ever lose one of them). I also like the USB charger, something more and more toys seem to be moving toward and which I find way more convenient/compact than the multiple bulky charges of yesteryear. (The charge is supposed to last for 90 minutes, but there’s also a warning to not use the toy for more that 15 minutes at once.)

But most of all, I love that it’s a new idea, and how easily it makes me come. At $189, if you’re itching for the function and don’t care about the form, it’ll be absolutely worth it for you, but if you focus on aesthetics, it might be worth holding out for the next iteration.