HOT GIRLS: Who is winning the Autostraddle Televisionary Hot Girl Award? Well, we can’t tell you that. Voting closes on Wednesday morning which means Mindy Kaling there is still lots of time for you to plug yourself on your blog (it would be a good excuse to update!).

We will tell you the top five so far! there is still time, ladies & gents & two-spirits, to turn this boat right around. Howevs, J-Beals is a tough cookie to beat, b/c she is hot and b/c her fans are very serious about winning these kinds of things: 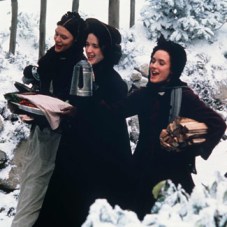 WHO IS THE REAL LOUISA MAY ALCOTT? I know what you’re thinking — it’s Jo March Tomboy Prototype, obvs! Well, not exactly — and the new movie The Woman Behind Little Women, which premieres tonight on PBS, digs deeper into Alcott’s biography & life. For example, the Real Louisa was motivated primarily by a desire not to be poor, which is why she published a great deal of “pulp fiction”/”moral pap for the young” under psuedonyms for the financial returns. These stories discussed things like “sexual desire, drug-users, spies and transvestites!” Though her father was a part of some of the most influential political circles of their time, he was never a breadwinner, and the Alcotts were way more poor than The Marches. Books like Little Women supported the fam.

Our favorite part of Louisa, however, is what a kickass feminist she was:

“She saw her mother really dependent on this improvident husband,” Reisen explains. “She saw the position of most married women — who she felt were marrying as an economic solution … and she said, ‘I love luxury, but freedom and independence better.’ “

Here’s a snippet from the film —  please note the soundbyte at 3:20, and really all ensuing clips involving The Literary Sleuths, the most amazing women to ever grace your computer screen (@npr):

WHEN ARE LINDSAY LOHAN AND SAM GOING TO GET BACK TOGETHER? 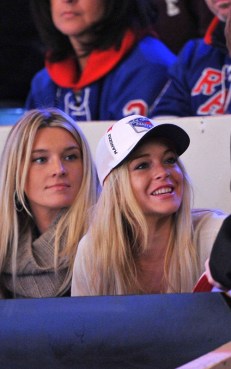 Lindsay Lohan has been out in public at a hockey game in New York City. She appeared normal, had all of her clothes on, and did not at any point tweet Samantha Ronson as far as we know. She looks super cute and healthy! Anne Heche, the Original Celebisexual, was also at the game, which is interesting. We prefer Lindsay.

V-DAY: Did the Valentine’s Day movie trailer go out of its way to hide a gay couple? The trailer “focuses on [Bradley] Cooper and co-star [Julia] Roberts, to the point where it looks like they have a romantic storyline together in the film, even though it has been public knowledge since at least May that Cooper would be playing a gay man in the film.” (@jezebel)

WHAT WILL LAST FOREVER? 12 things that became obsolete in the 00s. For the record, Intern Emily still loves film and handwritten letters. Paper will last forever. (@huffpo)

WHAT WILL NOT LAST PAST THE 00s? Jezebel also did a similar piece, except theirs is fads that are here today but will be gone in 10 years and it’s really funny. Remember—just 5 years ago, there was no such thing as YouTube and Twitter has only been around for three years. By 2020, we’ll all be holograms walking through walls and living under robot control anyway, so I guess we’ll just have to see what technology they give us to use throughout the Robot Kingdom. (@jezebel)

WHAT IS SERENA WILLIAMS DOING ON THE HSN? Serena Williams is selling things on the HSN but more importantly, she is the female athlete of the year, therefore proving that you should yell at people if they deserve it and you will still get the respect you deserve if you are awesome, and luckily she is awesome. Brava! (@bossip)

GAGA: Would you pay $25,000 to see Lady Gaga on New Year’s? Maybe if I sold both my parents’ cars I would have close to enough money to pay for that. Also, here’s a bunch of amazing scans from her Fame Monster book, which btw Autostraddle’s own Robin Roemer has a photo in! (@ohnotheydidnt)

MOVIES: How Can I See All The Films of the 00s Before 2010? Watch this – a YouTube user named Kees van Dijkhuizen has compiled a truly spectacular seven-minute video, he is a King Among Editors.