Tonight out lesbian Lori Lightfoot was elected as Mayor of Chicago, making her the first black woman and first openly LGBTQ+ person to hold the position.

In her first run for elected office, Lightfoot, 56, emerged as a surprising leader in the race after preliminary votes were cast in February. At the time there were 14 candidates on the ballot to succeed Mayor Rahm Emanuel, who decided against running for a third term.

She was victorious in tonight’s final race, with 74% of the vote to Toni Preckwinkle’s 26% and nearly 80% of the precincts reporting, according to the Chicago Tribune. Preckwinkle, who previously served on the Chicago City Council for 19 years, is also a black woman. No matter what happened tonight – Chicago set the stage to make history.

When Lightfoot is sworn in on May 20th, Chicago will officially become the largest U.S. city to elect a black woman as mayor. She will join seven other black women currently serving as mayors in major U.S. cities, including Atlanta and New Orleans. Chicago will now also become the biggest U.S. city to elect an openly gay mayor (Lightfoot and her wife share a daughter). Chicago is the nation’s third-largest city. The fourth-largest, Houston, elected lesbian Annise Parker as mayor from 2010 to 2016. Parker, now president and CEO of the political action committee The LGBTQ Victory Fund, was reported by The Advocate to have been present at Lightfoot’s celebration this evening.

Lori Lightfoot has promised to fight Chicago’s government corruption while also helping low-income and working class Chicagoans who have been otherwise ignored by local politicians. In a recent speech to black voters at a Rainbow/PUSH Coalition event, Lightfoot vowed that “We have the opportunity to bring all parts of our city together, to forge a new direction for our city that welcomes everyone to the table.”

 It’s a sentiment she echoed tonight to the Chicago Sun-Times from her victory hotel suite, “I feel very humbled and honored. I’m gonna do everything I can to earn it.” 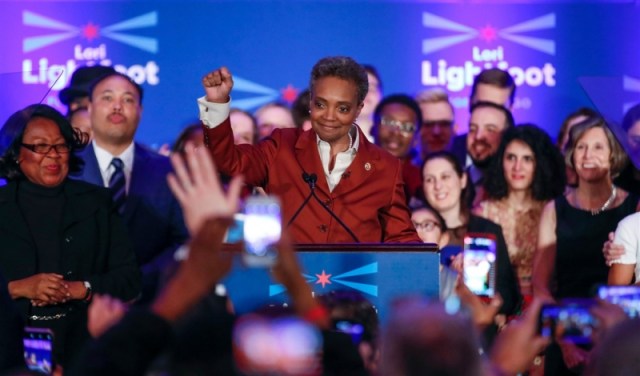 Lightfoot at her celebration rally tonight in Chicago.

Lightfoot’s supporters have argued that her own working class roots and infamous independent streak will make her the kind of mayor that firmly sets her priorities on the city’s most neglected communities. While not a native of Chicago, she is a graduate of the University of Chicago Law School and has made the city her home for decades. Still, there are parts of Lightfoot’s background – namely her history as a federal prosector and as head of the Chicago Police Department’s Office of Professional Standards – that have given other local activists worry as to whether or not she can usher in a new progressive vision for the city.

In 1996, Lightfoot joined the U.S. Attorney’s Office. She has since explained that her decision was in part motivated by the fact that the department was “almost exclusively white male. ” She wanted people of color to be represented. In 2002, she went on to become chief administrator of the CPD’s Office of Professional Standards. She stayed in that position for two years. The Office of Professional Standards has been credited as Chicago’s first attempt at a institutional police oversight agency. However, according to the Citizens Police Data Project, between 2002 and 2004 – under Lightfoot’s leadership – only 1.8% of the complaints made by civilians against officers were sustained. Officers who used excessive force had just a four in 1,000 chance of facing “serious discipline.”

Charlene Carruthers, a black queer woman Chicago activist and leader of The BYP 100, a nationally recognized network of black youth activists, tweeted tonight: “This is not a victory for LGBTQ people. We are going to have to fight the Lori Lightfoot administration tooth and nail.”

Lightfoot’s future in Chicago remains unwritten, but it’s still an exciting time to see women making gains in politics. We’re less than six months outside of November’s historic sweep of over 100 women being elected to US Congress – a national record. It’s also promising that hard fought activist work in Chicago aided in Rahm Emmanual’s decision not to run for re-election in the first place. We’re hopeful that the same community organizing effort in Chicago will help keep Lightfoot accountable as she leaves her mark on the city’s – and the United States’ – history.

Carmen has written 466 articles for us.