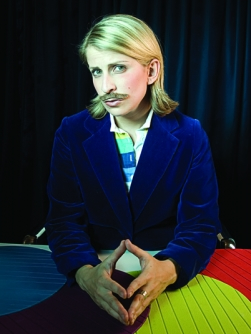 Auto-friend Liz Feldman has seemingly been off our radar lately, after a series of high profile writing jobs on The Jay Leno Show, Hot In Cleveland and last year’s Academy Awards. However! She’s actually been hard at work writing and producing the brand new sitcom 2 Broke Girls set to premiere TONIGHT at 9:30 on CBS. Liz recently checked in to give us the heads up that lesbians will absolutely love this new series about two twenty-something waitresses in New York City. The series stars Kat Dennings (Nick & Norah’s Infinite Playlist) and Beth Behrs (a cute girl who slightly resembles Brandy Howard) and comes from the collective brain of Michael Patrick King (Sex and the City, The Comeback) and Whitney Cummings.

I talked to Liz about why she thinks 2 Broke Girls is comedy’s answer to Rizzoli and Isles, her experience pitching lesbian shows to network big-wigs, and what the future holds for everybody’s favorite super-awkward gay talk show, This Just Out.

In a nutshell, why will our readers dig 2 Broke Girls?

2 Broke Girls appealed to me immediately, and I don’t know if you know this, but I’m a big lesbian. It’s about an unlikely friendship between two very different yet equally attractive girls. When I watched the pilot, I was immediately taken by both of their characters and so impressed at how well rounded they were. They’re empowered, they’re irreverent and they’re smart. And the actresses, Kat Dennings (Max) and Beth Behrs (Caroline), have incredible chemistry with each other. And they’re both seriously funny. I think lesbians out there will fall in love with this show. I’m thinking that 2 Broke Girls is the comedy world’s answer to Rizzoli and Isles. It premieres this Monday, September 19th at 9:30 on CBS. I really hope all my friendos out there will watch!

Which storylines in the show have you directly influenced/introduced?

I can’t divulge any upcoming story lines but suffice it to say that I have been a part of developing pretty much every episode. It’s a very collaborative effort and I’ve been loving being a part of the incredibly funny writing team. Working with Michael Patrick King is an actual dream that has come true. I have seen every episode of Sex and the City, and I remember watching it so many years ago and just relishing in how well written it was. Now I get to work side by side with MPK, SATC’s head writer. I thank my lucky stars every day.

Are Whitney & MPK hands on with the show, day-to-day and writing episodes? Or, did they simply create the show and then left it to another show-runner?

MPK is the showrunner and the head writer and I have never seen anyone handle those responsibilities more impressively. He’s a genius and he’s incredibly funny and he makes coming to work something that I look forward to. Whitney, also a brilliant person, is busy working on her other network sitcom, “Whitney,” for NBC. She still reads every script of ours and weighs in with her thoughts and pitches hilarious jokes too. I would imagine she never sleeps.

Thoughts on the NBC pilot “My Best Friend Is a Lesbo” and Ellen/Portia’s joint venture announced over the weekend? Based on your experience pitching lesbian themed shows, what has been the biggest stumbling block toward networks picking up these series?

I remain one of Ellen’s biggest fans, and I think Portia is a great comedic actress. So, that they would be working on something together really excites me. Can’t wait to see what they come up with. Last year I wrote a lesbian themed pilot for NBC that was very well received but ultimately did not make the cut. My goal is always to tell stories that are close to me but hopefully relevant to a wide audience. I would love to get a lesbian lead character on TV, but I won’t be developing any pilots this year, as my commitment is to 2 Broke Girls. So, if another writer is lucky and talented enough to sell a lesbian themed pilot, I’m thrilled for them. If the end result is a great lesbian character on TV, we all win. It will happen one of these days, and I hope it’s sooner than later.

Any hope for new This Just Out episodes during your hiatus?

This Just Out is always alive in the back of my mind; it’s something that I would love to return to. But it’s also something that I care so much about that I don’t want to do it half-assed. I’m an all or nothing kind of person when it comes to my creative endeavors. I can’t promise that I will have the time to do more in the near future, but I haven’t buried it either. Raimy and I talk about it all the time. And I can’t tell you how great it feels to know that people still care about it and want to see more. Makes a girl feel real good.

Anything else you’re listening to or reading right now you’d like to recommend or give a shout out?

I just re-watched one of my fave documentaries, Ruthie and Connie: Every Room in the House. It’s a doc about these fantastic old Jewish lesbians, who have been a couple for forty years. They risked so much to be together and their love is still so alive. They’re so sweet and wise and hilarious. I love them so much, I want to grow up to be them. I also can’t stop listening to the new Little Brutes EP, from Rachael Cantu and Harlan Silverman. I wake up with these songs in my head. They’re so catchy and well-written, and you gotta love Rachael Cantu’s voice. So, so good!