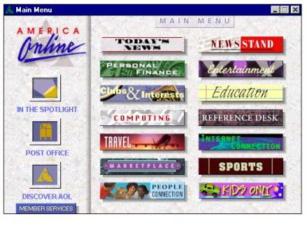 I picked up this 1996 book Assaults on Convention: Essays on Lesbian Transgressors from the library last week. It’s an essay collection that “explores lesbian misbehavior of many kinds,” with essays about lesbians who “break unspoken rules of the lesbian community” by doing things like being obsessive k.d. lang fans, boxing, being or patronizing sex workers or um, being serial killers (the rule against murder has been spoken for, however, I believe). It’s a pretty interesting book written at a really transitional time with respect to lesbian culture and internet culture.

One chapter, called “cyberdykes: tales from the internet,” by Lisa Haskell, attempts to discover the fears and hopes and dreams of lesbians who use that crazy thing called The Internet. She did her ‘research’ in 1994, the year I turned 13 and two years before America Online changed its price from $2.95 an hour to $19.95 a month, which was a very transformational situation. Sometimes I think the craziest thing about that time was that nobody had a photo of themselves on their computer — it was difficult-to-impossible to get one, which meant you’d probably never know what the people you chatted with looked like. Plus, there was no such thing as ‘googling’ someone or looking them up on a social networking site, so the internet felt really strongly separate from real life. Unsurprisingly, from the get-go, LGBT people took to the internet like moths to a flame.

Which brings us back to this article and this listling. After explaining what The Internet is, Haskell publishes a series of e-mails she received in response to the following usenet posting she made:

I’m looking to connect dykes who love the net: girls who use their computers for work, rest and play. Tell me what you love and what you hate about the net, let me into your most intimate moments with your computer.

Do you think the net is changing the ideas of what it is to be a dyke? Are we blazing trails for the future, or are we just a sad bunch of lesbo-geeks?

Now, I present to you 22 excerpts from those e-mail responses, written to Haskell by passionate internet-using lesbians and ripped mercilessly out of context for the purposes of this listling. Are you ready, CYBERDYKES?

22 Things Lesbians Had To Say About the Internet in 1994

1. “It’s my computer that puts me in contact with her and I love it for that. But I hate it too because it withholds her from me.”

2. “Somehow, people on the net are less intimidating because I view them as a part of Zorro [the computer].”

4. “Generally, you can tell a man on the net, not least because they will usually tell you pretty quickly. The allure of being a woman doesn’t last long.”

5. “…I think of my computer as being half-way between human and machine… I think of it the same way some people think of their pets.”

6. “I spend as much time as possible on the net: up to three hours.”

7. “The net is, in my opinion, a good place to be an activist to a tolerable degree.”

8. “What I like best about the net is that I don’t feel so isolated here. I hate the net when it is down or being fixed.”

9. “I think that meeting people on the net is about 100% cooler than any type of personals and computer dating.”

10. “The internet is said to be a transnational anarchy… [if it is], it is an anarchy of the privileged: everybody I meet here is from a university or a software developer.”

12. “We don’t transcend physical distance, it just changes the nature of that distance.”

13. “Are we blazing a trail? Or just shy and socially inept?”

14. “Sometimes there’s too much ‘showing off’, messages with words I’m not used to, subjects I cannot follow.”

15. “We think in words, so this is like a direct connection line to their thoughts. Pure imagination, a pure connection.”

16. “Here, I get a ‘choice’ of so many interesting women. I could never meet so many lovely dykes physically.”

17. “Political networks exist, and will be on the increase. However, it will still happen on many levels — from local, smaller networks to bigger ones binding them. I just hope there won’t be a hierarchy to these connections, ever.”

18. “It’s not that we’ll always be playing in this primitive environment; in [some] years’ time we [will be able to] easily see and hear each other and we’ll laugh at ourselves for taking these clunky lines of text so seriously.”

19. “Is breaking up [with an internet girlfriend] just as in real life? No, there are differences. When the contact comes to an end, the emptiness is much more hollow… it’s difficult to convince others that something *really* happened to you.”

20. “Yes, we are pioneers. We’re using technology to mutate ourselves according to our own design. In a fully diverse world, gender will become meaningless, the idea of the lesbian confined to history.”

21. “I am more intensely dyke because I am touched by the Sappho conversation every work day. Also, I know more about dyke cultures by being net-connected. It expands my world. We are definitely trail-blazing and cutting edge.”

22. “…I think the net is something special for dykes: it’s like life, but you can afford to play.”