Today at Camp, we are reading Santa Olivia by Jacqueline Carey, one of our top ten fantasy novels that have gay people in them:

Santa Olivia is basically a combination of werewolves and comic book heroes and adorable young gay girl love and vandalism and genetic engineering and government conspiracies and unlikely outcomes and boxing. Also the writing is superb, and if you usually shy away from YA because you don’t like the tone or whatever, you still have no excuse for not reading this book. It is number one on this list for a reason.

Jacqueline Carey is most well-known as the author of the Kushiel’s Legacy books, an epic fantasy series that takes place in an alternate historical Europe in which everyone has a lot more sex with people of all genders. If everyone wrote like Jacqueline Carey, there would be no such thing as the Bechdel test. (Her forthcoming speculative novel, Dark Currents: Agent of Hel, also looks really good.)

Anyway, because apparently I can’t force everyone in the world to read every book I like just by thinking about it (so far), here are some reasons you should read Santa Olivia: 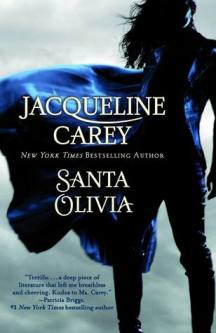 1. Santa Olivia is a semi-post-apocalyptic American-Mexican border town mysteriously sealed off from the rest of the world. It is officially known as Outpost No. 12.

2. No one leaves Outpost except in a box. Actually not even in a box. Except for the military presence, and it doesn’t leave so much as rotate.

3. Loup Garron lives there. She is superhuman and superbadass.

4. She is genetically modified to not feel fear.

5. At one point, she throws a boulder through a car.

6. That scene is really well-done, because all the scenes are really well done. Carey is a really good writer.

7. Loup also brings vigilante justice for rape and assault and homicide, but those are just the details.

9. Three guesses who starts it.

10. There is a hot bisexual bartender.

11. Queer girls make out. Gender barely enters into it.

12. All of the relationships are complex.

13. There is boxing. (Girlfight is good. This is better.)

14. You think you know where this book is going, but you do not. Not really.

What about you? Have you read Santa Olivia (or its adorable sequel, Saints Astray)? Did you have thoughts about it? What are they? Inquiring minds want to know.

This post goes hand-in-hand with A-Camp’s Read a F*cking Book Club with Carolyn, Jamie, and Meredydd.