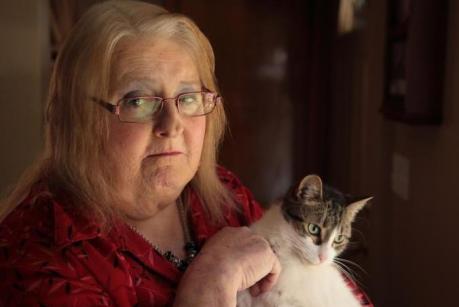 By now, you may have heard news that Aimee Stephens has passed. It was just last weekend that a crowdfund was created for her end-of-life care.

For the past few weeks, my colleagues and I at Transgender Law Center have been monitoring Supreme Court decisions for the verdict on the case that brought Aimee national attention. She was fired from a job in 2013, after announcing her gender transition.

I didn’t know Aimee Stephens personally. Still, I sobbed into the sleeve of my jacket. The result of her case would be coming any day now. The timing of death felt like an injustice in itself: she was once again being robbed of her dignity. Aimee died before ever knowing the results of her case. She died before knowing whether she had obtained justice. She died without witnessing how she could have set a precedent for trans people like her, like me.

Before Aimee Stephens’ experience with discrimination was brought to the highest court in the land, she was a funeral director. She helped guide the ceremonies that put our souls to rest. She helped families process grief. Her line of work was the bridge between life and death; she oversaw the final days spent separating a soul from a body.

Now it’s our turn to collectively mourn Aimee, as she had done for so many families before.

Grief is something trans people know too well. Only a few days pass between murders and attacks on trans lives. Just this month, we lost Nina Pop and Helle Jae O’Regan. Yet, despite how often our community mourns, our grief rarely finds peace. When we die, our name and gender is slandered. We are remembered not as ourselves, but as a mere projection—the person we are in the imagination of those who wouldn’t accept us. We are shut out of the funerals of our loved ones; in the eyes of hateful family members. we might taint their legacies.

It’s not just her death that is a tragedy—it’s that she had been waiting for the justice that trans people almost never receive. The tragedy lies in the fact that I would have never known Aimee Stephens’ name if she hadn’t fought the discrimination she experienced. The tragedy lies in the fact that even with Aimee’s hardships, her experience is being treated with more care and attention than most trans people receive. So many of us die before we ever see our dignity reflected back to us.

Aimee’s case must embolden us to show up for the trans people whose names are forgotten, whose experiences will never be acknowledged nationally. We must commit to ending the anti-Blackness that fuels racist institutions who set up Black trans women for a life of abuse and neglect. We have to channel our resources into the Indigenous trans and two-spirit communities that are continuing to lose their land to both colonizers and climate change. We have to free the trans migrants that languish in prisons with no one to turn to. Justice for Aimee is interlocked with justice for all of us.

The case she brought before the Supreme Court was not just about her. If the Supreme Court ruled in her favor, the decision would determine that all LGBTQ Americans are indeed protected under the Civil Rights Act of 1964. It would cement the precedent that would safeguard us in all future discrimination cases. But what’s even more important than the legal precedent is the need for trans lives to be affirmed as worthy of protection from harm, not just within the courts but within our culture. Our well-being cannot be carelessly threatened, as it is every day.

Because Aimee died too soon, we wait for this decision as if we are her. We continue living in a world where our lifespans are deliberately cut short. And we fight for a world where we don’t have to wait any longer—when justice is finally here.