Okay, so back when it was Underwear Week, I was having a super hard time coming up with a way to incorporate the tech column into our underwear theme. This was my first choice, until I realized it would have done better in the Bra Issue and that maybe we were looking for the kinds of undies you wear on your butt. So vibrating panties it was. But I really feel like this topic still deserves a shout out just because it’s so darn cool. Ladies, gentlemen and all others, I give you the First Warning System.

This bra can detect cancer. It could detect cancer long, long before our usual methods (mammogram and…uh…mammogram) would normally even be recommended. It could improve the visibility of screening for cancer. See the original story and video explanation here.

I don’t like my boobs touched. I don’t like them poked, prodded or compressed in anyway. I don’t mind that they’re there. I’m super comfortable with them. But, like, they just kinda wanna hang out. They don’t want company, and they certainly don’t want the life squeezed out of them. But you know what? I do those exams because hey, you never know. Now in terms of my attitudes toward my boobies, I’m on the mild end of things. I bind sometimes, but I don’t really feel dysphoric in the way that some members of our community do. Some people don’t want breasts acknowledged at all, and sometimes that makes healthcare just a little tougher. A mammogram is the ultimate in breast acknowledgement, but it is still necessary. This bra, though? Yeah, it’s still a bra and some people don’t want to wear a bra but it might be a cakewalk in comparison. And after all, you only have to wear it for 12 hours to get an accurate read. It’s a low cost, non-invasive alternative that can better women’s/people-with-breasts’s health – what’s more radical than that? 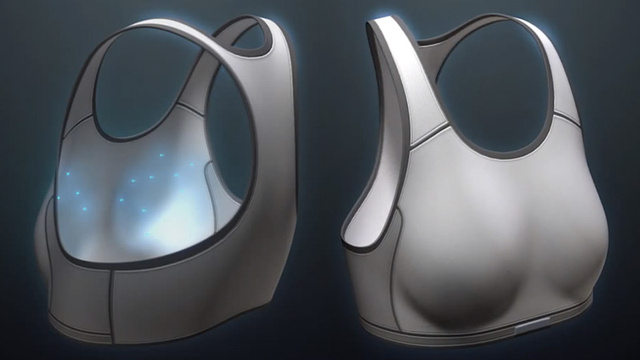 This bra looks magic. via Gizmodo

The cancer-detecting bra is still in prototype and is scheduled to be FDA approved this year. I for one am really excited to tech my queer boobs. And if you want the total cyborg undergarments look, get yourself some vibrating panties to go with it. Because preventative healthcare is sexy.