Pretty aggressive spoilers for both Life is Strange: Before the Storm and Life is Strange below. If you’re planning to play, please do so before reading or I won’t be able to live with myself.

When I first heard the E3 announcement about Life is Strange: Before the Storm, I was hit with a wave of anxiety. I was obviously going to play no matter what, but I worried the game would feel like a cheap gimmick at best, and at worst would ruin my memories of the original Life is Strange. Knowing what we know about how things turn out for these characters, I wondered what kind of story would be left to tell? The answer, as it turns out, is actually kind of my story – and maybe it’s your story, too. Episode two, Brave New World, is a beautiful fever dream; it’s a gift to queer gamers, an eerily accurate depiction of what it’s like to be a teenage girl just starting to figure out that, hey, maybe you like girls.

Brave New World begins hot off the events of episode one, with Chloe and Rachel and their parents in Principal Wells’ office for a disciplinary meeting. But they’re not in trouble for starting an actual forest fire, which is definitely the worst secret thing they’ve done so far, they’re being reprimanded for ditching school. 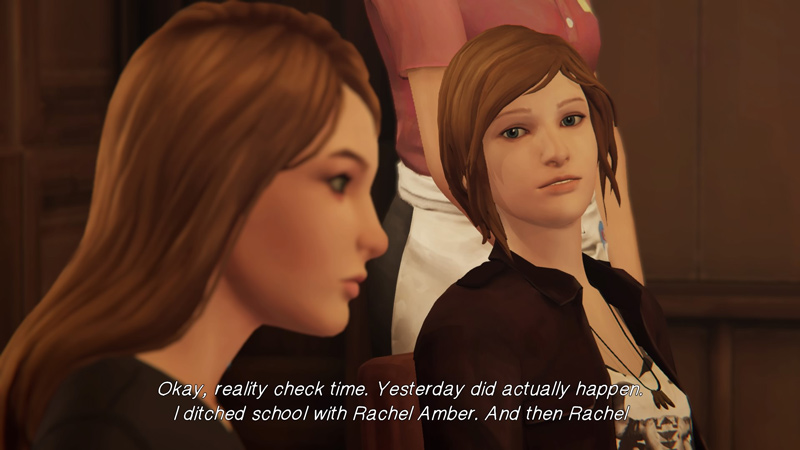 I also need a reality check. Lots of them.

Wells condemns Chloe, on account of how she’s a repeat offender, and is ready to punish her until Rachel speaks up to take the blame for their truancy. Only about five minutes into the game, and I’m already deep in my feelings because Chloe just looks so damn surprised that Rachel is trying to cover for her. Has anyone stuck up for her since her dad died? Since her best friend left? She looks at Rachel like she can’t believe anyone would risk themselves to protect her.

With this new information, Wells issues a punishment: Rachel won’t be allowed to perform in the school play, The Tempest. But Chloe knows how much the play means to Rachel, so she tells Wells exactly what he wants to hear. She says skipping school was all her fault and, because she’s Chloe, she does it by yelling insults in his face. And it’s not a surprise if you’ve played Life is Strange, but now we know exactly how Chloe was expelled from Blackwell.

As Chloe is cleaning out her locker, she comes across a photo of her rescue cat, Bongo, who got hit by a car and died. The moral of the story, Chloe bleakly reminds herself, is that “no one’s ever really rescued.” She’s certainly not expecting Max to come and save her — the girl hasn’t even responded to one of Chloe’s texts in months. 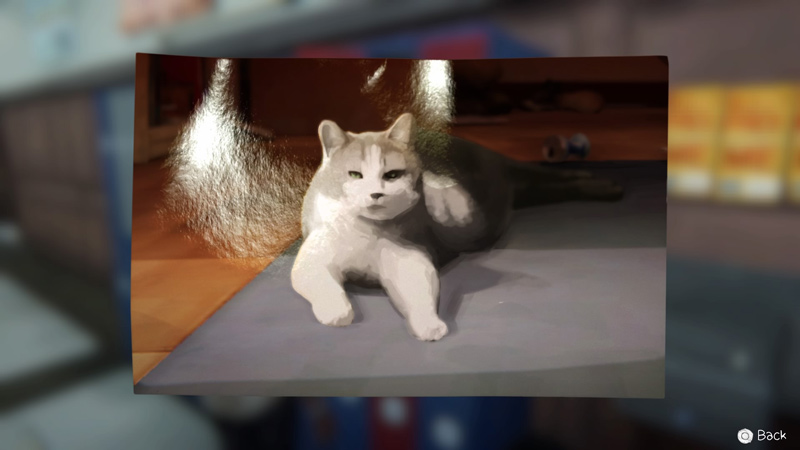 When I was 13, one of my best (and only) friends gave me half of a friendship necklace and a promise that this wasn’t a forever goodbye, and then she moved away to Alabama. After a few months, she stopped writing back too. For me, it was letters instead of text messages, but I still haven’t forgotten that searing sting of abandonment. Chloe has been broken in so many ways, but she has no idea how to even begin to handle all the cracks. She just leaves them gaping and exposed, and she hurts and she hurts and she hurts.

After fighting with her mom and David in the school parking lot, Chloe heads for the only safe place she has left: the junkyard. Finding Chloe’s future truck there for the first time felt a bit like seeing an old friend, and it’s just one of many nods to the original game. As she’s wandering around looking for ways to fix up the truck, Chloe stumbles on a nudie magazine. Her reaction to it, like one of her earlier journal entries about how “Pris from Blade Runner popped into [her] head last time [she] rubbed one” are just a couple of small, but welcome, details that show us Chloe’s uncertainty about her sexuality. 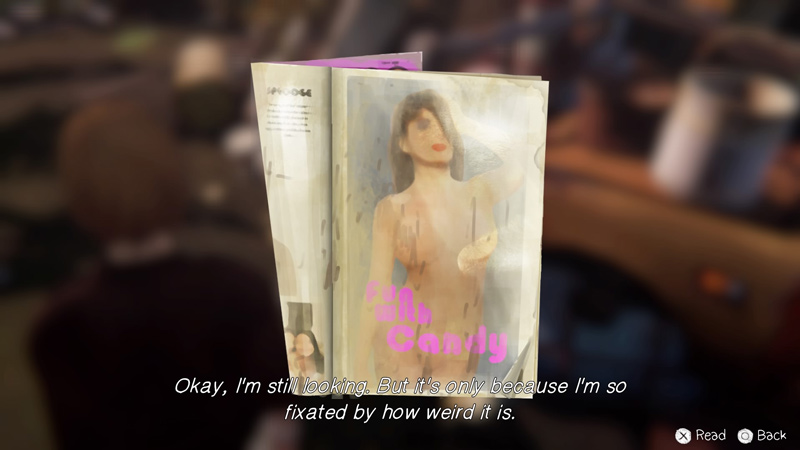 Chloe fixes up the truck to the best of her ability before enjoying a smoke break, which is set beautifully to “A Hole in the Earth” by Daughter. The Life is Strange soundtracks have always been phenomenal, and this episode is no exception.

Rachel shows up at the junkyard to flirt a little and also talk about feelings a lot, and the whole scene is just so queer and so authentic. Even though Chloe and Rachel only really met a day ago, it doesn’t feel like their relationship is progressing too fast at all. There’s this thing that’s always happened to me, I call it making “summer camp friends,” where I strike up a very intense, very immediate bond with another person. The women (so far they’ve only been women) are all either queer or questioning, and the friendship always sparks like Alison’s “Ring of Keys” moment in Fun Home.

Chloe and Rachel obviously have this same kind of spark — they can feel their hearts saying “hi” — but up until now they’ve mostly danced around it. They get closer to acknowledging it than ever before during their impromptu therapy session; Rachel puts her head on Chloe’s shoulder, and Chloe looks surprised and terrified and happy all at once. It’s a lot to handle. 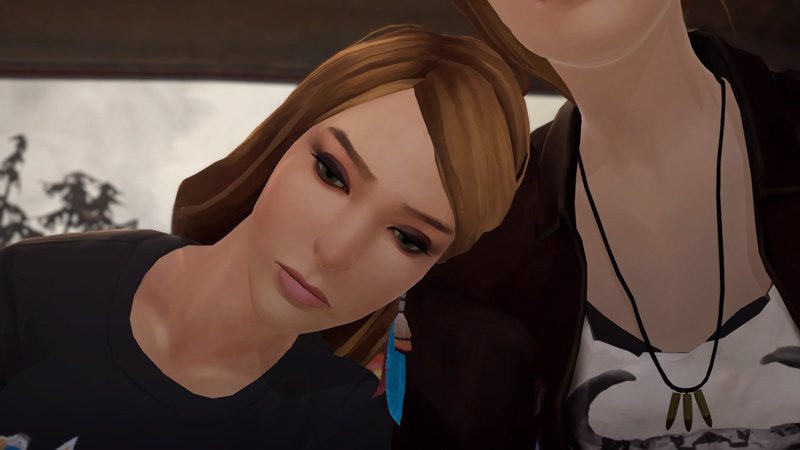 A little later on, there’s yet another beautifully realistic conversation that almost could’ve been lifted directly out of my life. Steph, who is also queer and totally out at Blackwell, asks Chloe if she and Rachel are together. Chloe panics and stutters out her response, telling Steph that she doesn’t know and it’s confusing. And Steph, of course, immediately gets it, because my experience has been that queers can usually recognize queers.

The first person I ever came out to was a “summer camp friend” I had just met the day before. We rode the T around Boston all night, talking about everything. We walked through Chestnut Hill as the sun was rising and made up stories about the rich people were just getting out of bed. She told me she was bi so bluntly, she just knew exactly who she was, and I was in awe. I stumbled, I couldn’t say anything back, but she knew anyway. She asked if I was straight, probably because she thought it would be easier for me to say no to that first. It was, and I did. 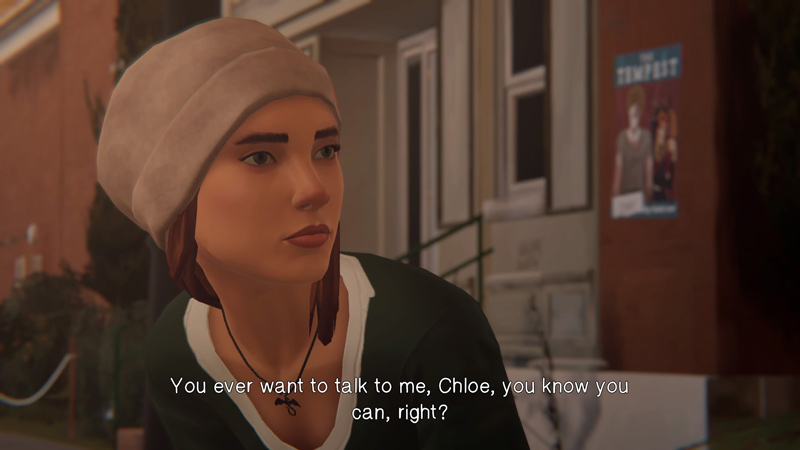 Everyone needs a Steph

At the beginning of this, I called Brave New World a beautiful fever dream, and the scenes before, after, and during the performance of The Tempest are really the dreamiest part of the whole game. The cast is down a couple of actress and there is no one to play Ariel, so Rachel volunteers Chloe for the role. Chloe, obviously, wants nothing to do with it. But then Rachel pleads with her, asks Chloe to do it “for me,” and there’s a really great transition from Chloe just sighing, that then cuts immediately to her in full Ariel costume.

The performance starts out fine, but turns into a downright ethereal vision when Rachel goes off script. Instead of assuring Ariel’s freedom, which is the written line, Rachel says that she cannot stand to let Ariel go because she holds her too dear. Chloe improvises admirably (and adorably), and the two talk about their feelings on a hazy stage under the guise of Shakespearian prose. Rachel drops to her knees and promises Chloe that she cares for her and that they will run away together as soon as they can, an echo from their earlier conversations. The scene becomes even more meaningful when you realize, as my wife pointed out, that in The Tempest, Chloe’s character of Ariel is at times only visible to Rachel’s Prospero. Only Rachel can really see Chloe. 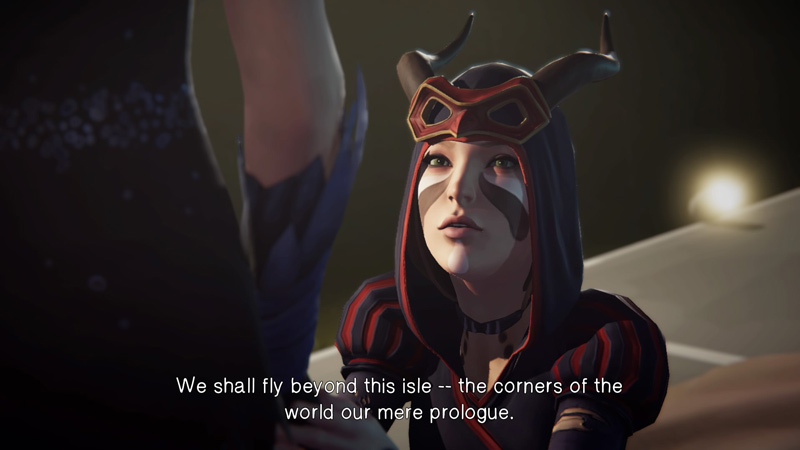 Just fuck me up.

On a post-performance high, Rachel and Chloe practically float through the neighborhood and make more big plans for their Arcadia Bay getaway. They hold hands and spin and talk about the future, and it finally becomes too much for Chloe to pretend. She’s feeling things she’s never felt before and she’s terrified that it’s not the same for Rachel, so she asks if Rachel really means it. Rachel says she’s more serious than she’s ever been, and wants to know what it would take to convince Chloe. 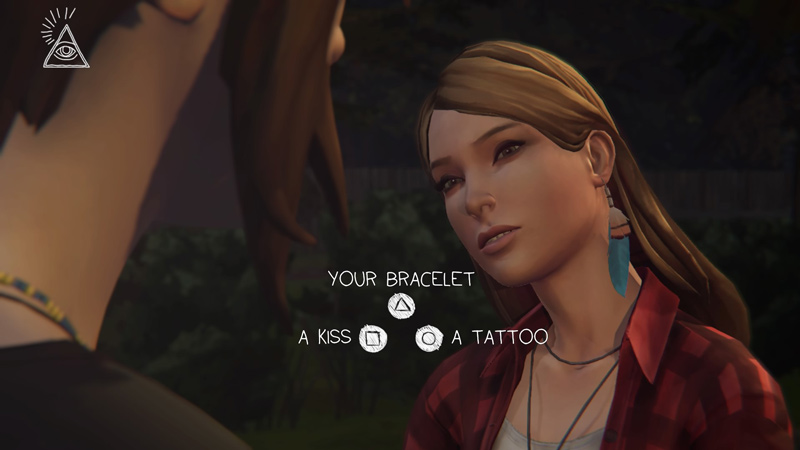 I need to confess something. I, a known queer, almost did not choose the kiss option. The lack of rewind in Before the Storm has made me second guess every single decision, and I was scared that Rachel would say no or it would somehow backfire. I am so glad I went for it, though, because I was rewarded with the most tender video game scene I have ever played in my whole entire life. Chloe can’t bring herself to ask for a kiss, she can’t say those words out loud, but she manages to shift and mumble adorably and awkwardly enough so that Rachel understands. 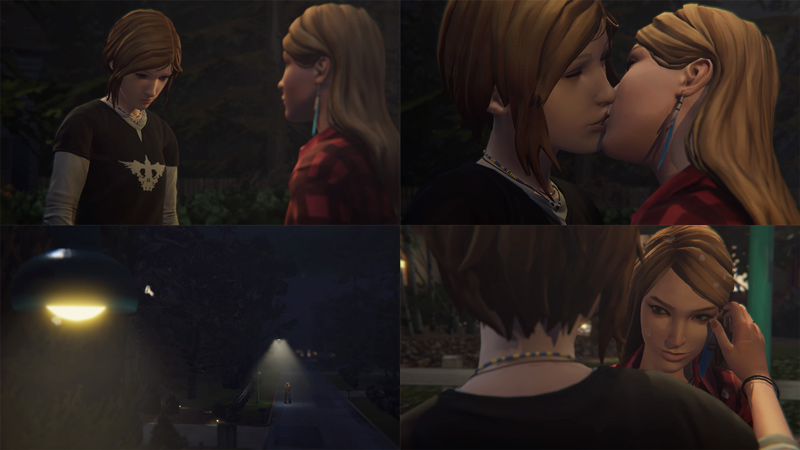 The first time I kissed my wife, almost 12 years ago, I didn’t know how to ask for it either. It’s hard to verbalize something that big, something that scares and excites you beyond a measure you’ve ever known before. Luckily for me, my wife understood my non-verbal “moves” too. When we kissed, I felt like something switched on inside my sternum, and somehow this video game and this character capture that feeling perfectly. 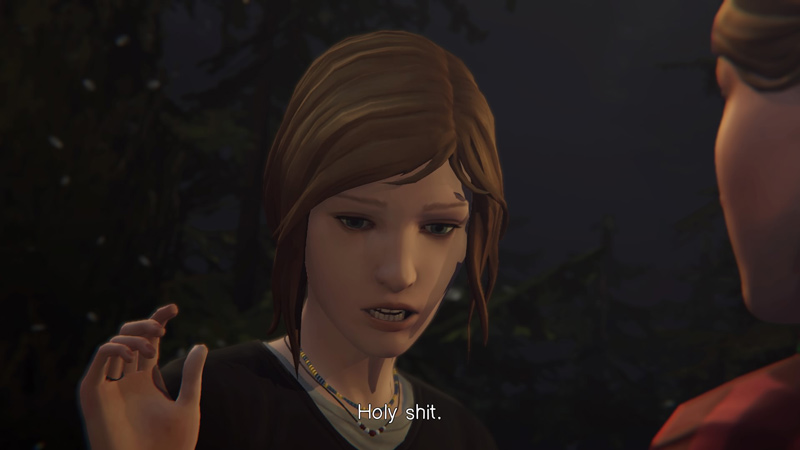 I don’t know exactly what’s going to happen in the final episode of Before the Storm, but we all know how things end for Rachel so I’m bracing for impact. I hope the game doesn’t ever explicitly introduce Jefferson or any of the ugliness that follows; I want this game to stay separate from all that. No matter what, I will forever cherish the three hours I spent playing Brave New World. I have never felt so seen by video game, and I don’t think I ever will again. In conclusion, Bae over Bay. Forever.

Life is Strange: Before the Storm is available on Windows, PS4, and Xbox One, and you should go play it (again) right this very second. Then you should listen to the cover of “Nineteen” by Hayley Williams on Tegan and Sara’s “The Con X: Covers” and cry about it with me.