It’s no secret that I am just about the biggest, loudest, Life is Strange fangirl on the planet Earth. It was the very first thing I wrote about on this website page! The original game goes on sale for $5 basically every month and can be played on just about anything that doesn’t say Nintendo on it, and as such I no longer accept excuses from people who still haven’t played it. Get your shit together!

Anyway. As you can hopefully tell by now, I am invested. So when they announced that more games were coming, I got nervous. Life is Strange was lighting in a bottle, and I’d hate to see that diluted like a TV show that refuses to end. There’s a sequel in development, and at this point not a lot has been made public about how that’s gonna go, besides that it apparently will not be about Max and Chloe, which I think is a good thing. As long as it’s not about boys.

And then they announced Before the Storm, a prequel to the first game, with Chloe as the lead and a story focusing on her and Rachel Amber. There were red flags all over this thing. It was being made by a different studio, would they be able to capture the right tone? Ashly Burch wasn’t reprising her role as Chloe due to the Voice Actor’s strike, would the new actor bring enough heart to balance Chloe’s attitude? And, most worrying, if you played the first game, you already know Rachel and Chloe’s fates. Why tell this story when we know it can’t end happily? Well, episode one is here, and with it come answers to the first two of those concerns, if not the third. 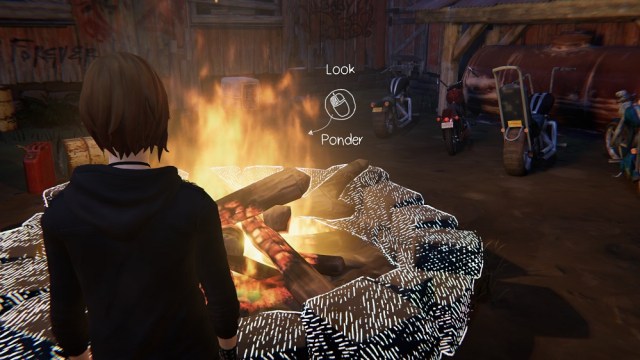 (This review will contain some minor plot details, and will describe the general story for the episode. I won’t spoil any major beats, but spoilers are in the eye of the beholder so this is fair warning!)

The game opens up with Chloe out by herself at night, walking the railroad tracks to go see a band playing at an old mill on the outskirts of town. It’s a prologue, introducing you to Chloe and eventually to Rachel. But it’s also a tutorial, reminding you to wander around and look at things to unlock dialogue options, and forcing you to try the new game mechanic: Chloe doesn’t have Max’s time control magic, or any magic at all. Her superpower is arguing and insulting people! It sounds terrible! And the first time you use it, Chloe is trying to smooth talk her way through a bouncer to get into the show, and it feels stilted and dumb and bad, and I hated it. And also, at this point, the new voice actor wasn’t working for me. She sounded like she was doing a Chloe impression. And all the lines were written as exclamations. It all just felt unnatural and ill-fitting. And like maybe Chloe was too acerbic a character to carry a game in the lead role? But then the prologue ended, and Chloe woke up in her bedroom that we know so well, and suddenly I was right back in my baby gay broken hearted feels. 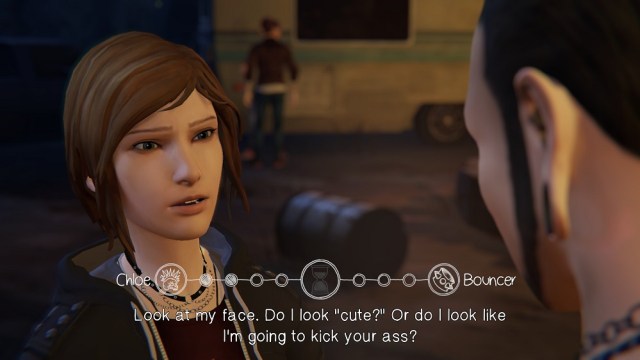 Do you really want me to answer that?

This game takes place three years or so before the first game. Chloe’s father is dead, and her mother has just started dating David and his mustache. Max moved away and stopped returning Chloe’s texts. Chloe is sad and lost and lonely (and so young) and is flunking out of school. And suddenly, the most popular girl in school is talking to her.

That’s all it takes for the game to come alive. Just putting Chloe into her real world. Putting us in her shoes and in her head. 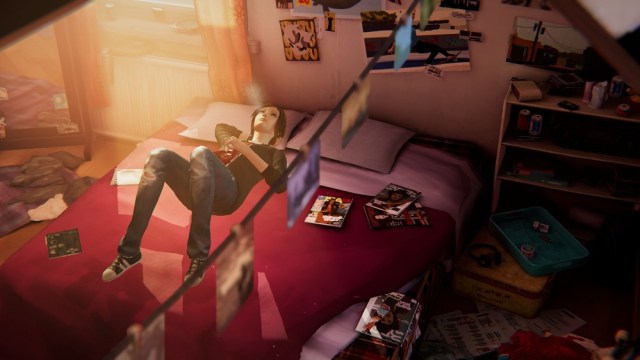 Speaking of shoes, do not wear them in your bed, please.

Following the tradition of the first game, episode one of Before the Storm takes place over the course of a single day. Chloe meets Rachel at that show she talks herself into in the prologue, and Rachel finds her again at school the next day. They play hookie. They have an adventure. Things go not-exactly-as-planned.

The first game was a slow burn (as much as a game that takes place over the course of five days can ever be considered “slow”). Max and Chloe had grown up together and grown apart; they had to figure out how to know each other again, and what the shape of their relationship would look like after everything that came before. That game was also about saving the world, and while Max and Chloe’s relationship was always the emotional anchor and the driving force of the game, it wasn’t always the plot.

This time, at least through episode one, Chloe and Rachel’s relationship is the focus, and it is coming in hot. This is a story of firsts. Of meeting a person you feel like you might have dreamed into existence. Instant connection and the surprise of how exciting every second suddenly is. It’s a story about how terrifying it is to be honest with a person, and how unbearable it is when they can’t understand you. This is, essentially, the best angst fanfiction I have ever read. 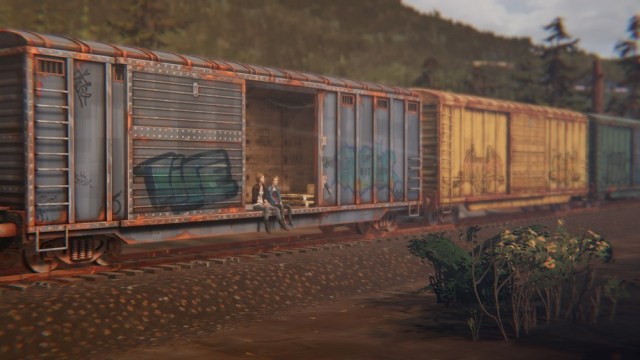 Oh god I ship it already.

Arcadia Bay once again provides the perfect backdrop to all this emoting. It’s still the same place, industries failing and unemployment on the rise, but it doesn’t yet know that it is doomed. There are familiar faces (Drug Dealer Frank is probably the most important to the plot, but Victoria is obviously the most important to my heart. I swooned half to death when I saw her.) And there are some new ones (do not skip the opportunity to play DnD with the nerds.) And, best of all, there’s no Warren! There are plenty of other boys to say “no” to, though, don’t worry. If anything, Chloe is even better suited to playing this game as a Misandry Simulator than Max was. 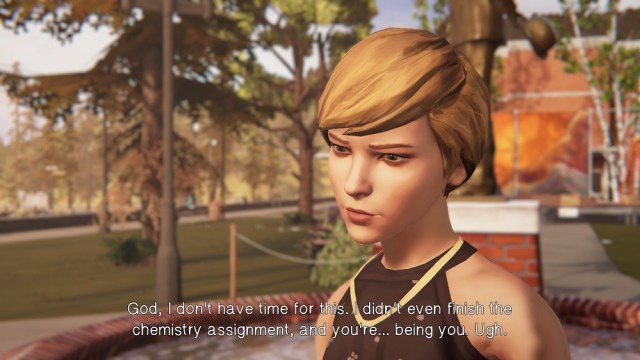 Max was an outsider: new in town, uninvolved with anything around her until we forced her to get involved. She was truly aloof until we were ready to be attached to the game. Chloe is an outsider, too, but in a totally different way. She is hopelessly mired in the town around her as much as she’s also isolated herself from it. Where Max moved through Arcadia Bay almost in a dreamlike state, a little above it all, Chloe’s distance from everyone is felt through a painfully relatable haze of grief and insecurity. (If this sounds big and dramatic and pretentious, well, it is and it’s not. She’s a sixteen year old girl. Her feelings are big and dramatic and pretentious, but they are also entirely real.) She’s rude and annoying and can be depended on to say the wrong thing at exactly the wrong moment, same as ever. But now you’re in her brain and you know how hard she’s trying and how aware she is of her failures. Be prepared, even just in this first of three episodes, to love Chloe even more than you already did, more than maybe you thought was possible. She absolutely wrecked me. 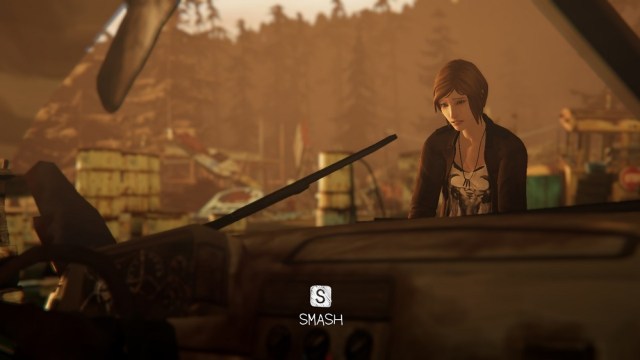 Hopefully this give us this same button prompt later for Rachel amiright.

So. Does the new studio have a handle on the tone this game needs? Damn right, they do. After the uneven prologue, you will find yourself right back in the bittersweet teenage dream that is Arcadia Bay. The lighting is as moody and airy as ever, and the soundtrack as perfectly curated. And the same is true for Chloe’s new voice actor. Halfway through this episode I had completely forgotten that Chloe had ever sounded any other way; she is entirely herself, for better and for worse. The final question: Is this story as doomed as it seems it has to be, and is that a story we should allow ourselves to get invested in? I don’t know the answer to that. We’ll have to wait to see how the next two episodes play out, and even then I doubt it’ll be too much clearer. For now, I am happy to see Rachel Amber being given a voice, and a life, and a role to play beyond being a face on a Missing Person poster. I’m happy to get to know her, even if I am just setting myself up for a fall.

Life is Strange: Before the Storm is available for Windows PC, Playstation 4 and Xbox One. The whole game (three episodes in total) will run you $16.99, or you can spend a few dollars more to upgrade to the Deluxe Edition, which will eventually include a bonus Max episode. There’s no release schedule for the next episodes yet, but the last game released one every three months or so, so that’s my best guess until the developers say otherwise. 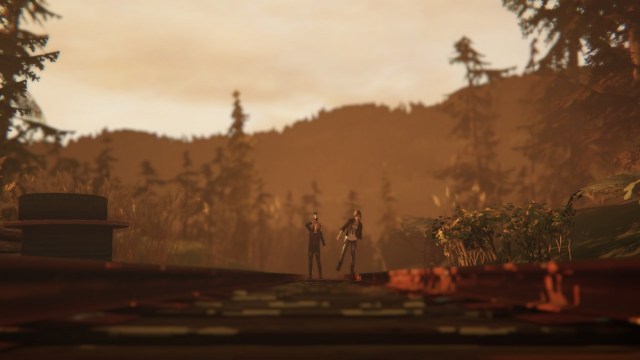 Did you learn nothing from Buddy Threadgoode?

If you liked the first game, you’ll like this one. And if you loved the first game, you’ll probably already have played this one by the time this article goes up, and you and I both are probably still wallowing in our feelings. So get yourself into the comments and release those feelings like you are Chloe Price and this article is a future stepdad who dared to offer you a ride to school.