Because business takes up so much more of my time than writing these days and I miss you people, I’ve committed to finding a way to write and publish at least one thing every day (except Saturday!) indefinitely. This sometimes means digging through old drafts that never saw the light of day or trying out ideas that might not always land. Here’s one that’s been waiting in drafts with a [DECIDING IF THIS IS FUNNY OR NOT] in the status bar for two years! I guess you’ll have to let me know how you feel about it or if I should get back to accounting.

In the early 2000s, my younger brother Lewis was a prolific writer for his high school’s newspaper, churning out fantastic food reviews including a notable piece evaluating the snack options of our mother’s kitchen. His work was so revered and the summer was so slow that he was eventually granted a two-page spread, “The Lewis Pages,” to fill with whatever he wanted, such as a story headlined “Mother Reminds Son Of His Lack Of Employment” and another entitled “People I Kept In Touch With Over The Summer At All Time Low.”

Occasionally Lewis turned to me, his sister, for content. This is long before I too became a content producer. Recently while visiting my Mom in Michigan, she dug up some of the old papers and I was thrilled to rifle through them and re-read Lewis’s restaurant reviews while he moaned in agony and pleaded with me not to read them. I’m not sure what he’s ashamed of, but anyhow, I have transcribed and am now printing for your delight and entertainment a very Vintage Interview with me, Marie Bernard (“Riese” is my nickname), from August of 2001. He asked me about my summer and stuff but mostly it was about The Olive Garden.

Interview With My Sister, by Lewis Bernard 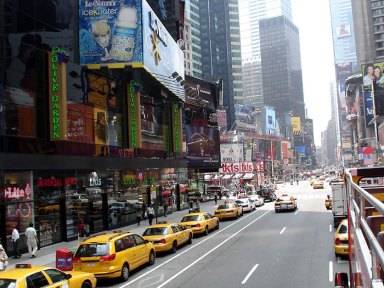 the olive garden in times square

Many of you may remember that last time I had my own page, I interviewed my sister. I got a lot of good feedback about it so I figured I should try to interview her again. This particular interview was conducted via cell-phone while Marie was spending the summer in New York City.

Marie: It’s really hot, this is New York right, and I’m walking down the street and it’s 150 degrees, so there’s a police car, probably trying to arrest someone, right, but no one is stopping, no one is pulling over, everyone is just honking at him! Which is probably why everyone is dying. So that’s the news from 14th and Broadway. Mention that the taxi drivers were actually honking at the police car. I was in a taxi cab yesterday and there were some people in an SUV and they were playing their music so loudly that our taxi was vibrating and you know how all taxi drivers are on the verge of road rage?

M: Well he was opening his door and yelling and I thought I was gonna die. I’m at the frozen yogurt place so you’re gonna have to hold on.

L: But New York is good?

M: Do you know where I work?

L: At the Olive Garden.

M: Sunday was my last night at The Olive Garden in Times Square and I got everyone to go out and I got drunk, and now I am poor. But not because I spent all my money on alcohol, but because I quit my job because I have to go back to Michigan and get a new job there.

L: Any interesting things happen at The Olive Garden?

M: I had this woman who came in alone and had like 16 bags and lots of layers and a big head-scarf thing, so she sat down and I asked her if she wanted any wine, and she said no because she’d “just finished a couple of martinis,” and she repeated her order like five times to me, and kept on asking the table next to her for a glass of wine. So after she ate and I brought the bill, she grabbed her bags and started running towards the door out of the restaurant, and the bartender was like, Marie, your woman is on the run, and so I chased after her, and then she saw me just as she was halfway out the door and doubled back and leapt on the escalator to go upstairs to the ladies room. So I was like, okay, and I waited. The check was still on the table and she came back and gave me cash and said that she never before had someone “jump down her throat” while going to the bathroom. She also told me that she had a 15-year-old daughter. I dropped a tray, did I tell you that before?

M: Well, you can write that I dropped a lasagna, a chicken parmesan and a T-Bone all on one person and she started crying. It wasn’t even her food, it was the other table’s food. The tray slipped when I was reaching for the tray strand. It was terrible.

L: Did you get fired or did you quit?

M: No, no, no, they love me there. Three people got fired last week but I quit. Because when you’re there you’re family.

L: Yeah that’s what I thought before I got fired from Barry’s.

M: I guess that’s what we all think. But they don’t fire girls, only guys, one guy got fired for swearing, another called his table “ghetto,” and the third got fired for asking his table why they didn’t tip him.

L: They fired him for that?

M: You are not allowed to do that, which is too bad ’cause a lot of bad tippers eat there. Those are also the people who ask for to-go boxes and stuff a mutilated piece of lasagna, a half-eaten, cold, soggy breadstick, and the few shreds of salad into it.

L: I went to The Olive Garden.

M: Is that what you did there?

L: It’s exactly like the Parmesan Crusted Chicken so that’s kinda a rip.

M: Except that the Chicken Con Broccoli isn’t crusted, I don’t know if “crusted” is a word but neither is Hospitaliano, and that’s what it says on our name tags, people think it’s our name.

L: I finished most of my meal, but I got a to-go box and the waitress put my half-eaten, cold, soggy breadstick in the box.

M: She probably thought that’s what you wanted.

L: Well I didn’t want it. What am I supposed to do with a half-eaten breadstick?

M: They probably don’t reheat well. Tell people that I don’t just work at that job, I’m also in summer school. There is more to me than all-you-can-eat salad.

M: One time this one cook got really mad at this other cook and threw pasta in her face, I think that’s a good idea.

L: The guy at the Meijer station wouldn’t sell me a lighter and I got really mad.

M: Did you throw pasta on his face?

M: You could get fired for that.

M: You could get alcohol if you lived in New York because it’s anarchy.

L: How would you compare the nightlife?

M: New York is approximately 150 times better. In Ann Arbor there’s nowhere to go except somebody’s house and they make drinks a lot better at a bar. Like at frat parties normally all they have is beer called Shwanks or something and it tastes really bad.

L: Do you realize that I’ve only asked you like two interview questions and I’ve filled up around two pages? Oh, I have a job interview tomorrow.

M: Maybe I’ll buy my books from you but it might be embarrassing.

M: Promise you won’t embarrass me in front of my cool college friends. All my friends are gonna come to me and say, “Oh my G-d I bought my books from your little brother” and they’re gonna say it like I don’t know that you work there, kinda like when people say you got a hair cut, like um, yeah, I kinda remember that happening. I hope I buy my books from you!

L: I made bread today, from scratch too, without assistance from the bread maker.

M: I’m glad to hear that you learned something new, I know how to put breadsticks into a basket so between the two of us we could feed a small hungry army.

L: So I’m gonna pick you up at the airport at 8AM.

M: Yeah, otherwise known as the buttcrack of dawn. I’ll be in a bad mood.