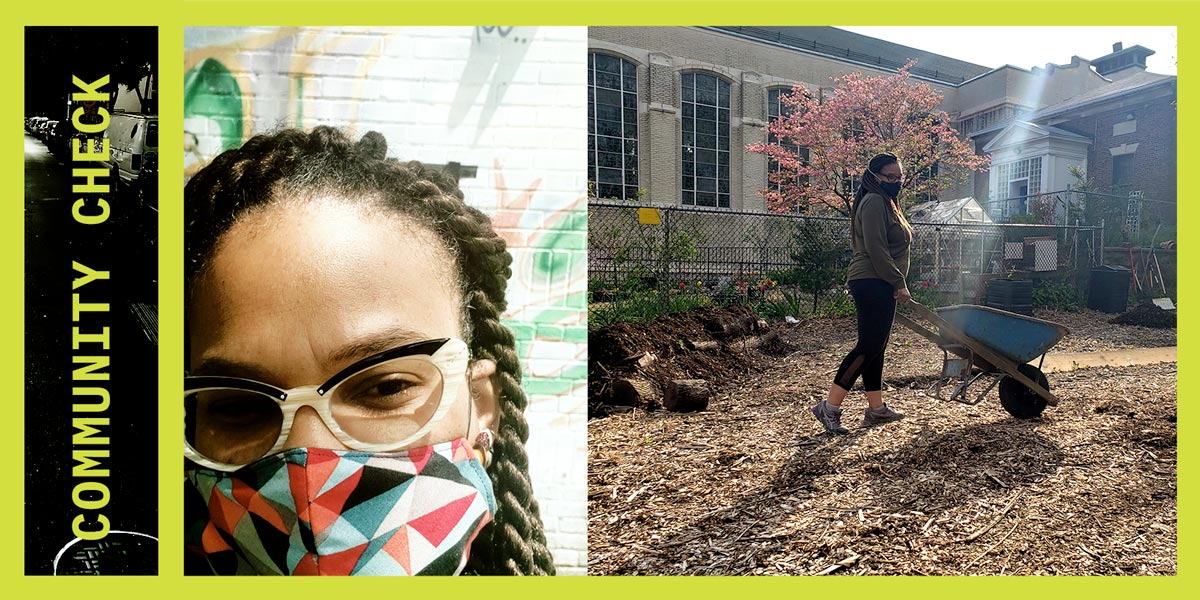 I don’t know how to put into words the reality of what it’s been like in this city.

I came back to New York City because I need the city to survive and my mother needs me to thrive. After moving here from Jamaica at 13 and bouncing around the US all my adult life, NYC has always been the only place that feels like home in this country, the place I always return to, and where I’ve lived the longest. This city has always been the physical manifestation of all the lives I (we) live inside ourselves – this city that is everyone’s muse, no one’s friend, but birthed legions of geniuses. After 15 years away, I returned last fall to a city ravaged by gentrification warfare on the lives that made it. Where Trans and Queer Black Indigenous People of Color (QTBIPOC) are pushed so far to the margins you’d think we were never here at all.

Now I’m in the Bronx; it feels like the last place left for poor people here. In a place where gentrification is increasing but agency for Black Indigienous People of Color isn’t, it’s obvious folks really aren’t checkin for us. This pandemic is showing the festering roots of the oppressive systems we are surviving. The city map of the number of positive COVID-19 cases in the 5 boroughs stands as proof of the fact that those of us in the “outer boroughs” aren’t provided with the resources we need to survive.

If QTBIPOC are the least likely to be hired for living-wage jobs, the most likely to be discriminated against by healthcare professionals, have the highest rate of homeless youth, and are the last discussed during this pandemic, but at the same time are likely to be targeted for racist and anti-Black violence by the police, we can see that we are somehow persisting through a very public genocide. People are dying right now because of hetro white supremacist imperialist capitalist patriarchy (shout out to bell hooks).

For decades The Bronx has been a borough made up of folks from the global south: from the Caribbean, Asia, Africa and Latin America. We’re all just here trying to make a way. In response to the inequity exacerbated by the pandemic a group of us, mostly queer women of color who have already been organizing around these issues, formed the North Bronx Collective to provide direct solidarity and coalition building with our neighbors to offer mutual aid food shares, and education and support around housing rights and workers’ rights. We actively center the most tyranized and exploited of us: folks with disabilities of all types, immigrants to this country and those of us who are undocumented here, and LGBTQIA+ folks – especially QTBIPOC.

We jumped into mutual aid with both feet, raising money, passing out grocery gift cards, shopping for families who were urgently calling our google number, and now passing out hundreds of donated meals along with PPE and political education materials once per week.

In the beginning, the Collective delivered these groceries and food mostly on foot. Let me explain that our collectives are small. We are a hand-full of people trying to create resilience in a space where folks are dying not just from COVID-19, but the effects of being poor. We were being crushed by emergencies: Families of four not having food for days; queer students of color caring for their elders who aren’t able to buy food because they can’t leave the apartment and can’t afford the food anyway because they have to pay the rent; a mother who was so sick we thought she wouldn’t make it and were helping her make arrangements to protect her children who had no one else to care for them; people who refused to go to the hospital because they know that they will not get the proper care (because they never get the proper care) and so feel like being in that place is a death sentence.

To help handle the amount of need, we partnered with Chilis on Wheels, an organization dedicated to providing vegan meals to combat food insecurity, for some of the deliveries. But how can crews of two or three people even begin to cover this ground? Mind you, most of us do not have cars and volunteers with cars are few and far between or aren’t in the Bronx and don’t want to come here. And still, we had the matter of how and what to feed folks who couldn’t be reached by Chilis.

As a vegan educator who sees veganism as a necessary step towards upending systemic oppression, I brought this analysis to the collective to explain that there is no way for us to move forward in our work by providing unethical, unhealthy food. Folks tend to look at veganism as a privilege. This is primarily due to the loudness of white “mainstream” veganism which is decidedly biased and overwhelmingly privileged. Now, as white folks flee the city, we are left here to keep it running as we scrounge for scraps amid consistent police harassment to get our food. Veganism has never been a privilege for Black Indigenous People of Color. Our ancestral food patterns are vegan and the spiritual and nutritional teachings around them are vegan. In this moment, especially for QTBIPOC, any small privileges we have for food are gone in a space where food scarcity is a reality that is disproportionately affecting us. Besides, if we’re being killed we cannot be consuming foods that kill us.

Our Collective has agreed and recognizes that sustainable food and our own food pathways are the only way to keep us safe. We are moving towards providing only vegan meals and growing food through community gardening. One of our main missions is to teach folks how to grow food.

Our collectives are here in mutual aid because we are poor people helping poor people. No charity, no hand-outs, just solidarity because we are all in this together building with our community. Being a Black dyke doing this work doesn’t feel like a stretch. That’s what we do. We are the trailblazers, anchors and the backbones of our communities. Working in our community garden with a fierce group of women and non-binary folks feels like an easy revolution. Feeding the people looks like a liberation that’s not a heavy lift, no matter how many heartbreaks we face. I see this work as possible in all of us. We have nothing to lose by shedding the same system that’s breaking us and caused this catastrophe. We can create something beautiful and new with the radical love that has always sustained us just under the surface.

In the next month I am working with others to gather QTBIPOC organizations in NYC to create a larger support network. We are building together for resilience for the long road. We can absolutely win (shout out to Assata Shakur).

Originally from Kingston, Jamaica, LoriKim Alexander is a Black femme dyke who has dedicated her life to working for social and environmental justice specifically organizing around justice for LGBTQIA+ Black, Brown and Indigenous Communities. LoriKim’s work in anthropology and as a trained biologist has facilitated her in centering initiatives against environmental racism and for the implementation of environmental education for People of Color around Indigenous ecological knowledge and decolonialism through veganism for the past 25+ years. Having lived in different parts of the US for three decades, LoriKim now resides in NYC where she continues her work as a facilitator and organizer in an effort to ensure the creation of spaces that center the most marginalized.

LoriKim has written 1 article for us.