Ready Player One is one of the most divisive books in the queer community, the feminist community, and the geek community — so it’s no surprise the movie, which crushed the box office this holiday weekend, has been received with similar wide-eyed delight and side-eyed rancor. But I am here to tell you that Saturday afternoon I sat in a packed theater in New York City between two other lesbians and watched as Lena Waithe wove a magic spell around that audience, ping-ponging them between flashes of awe and fits of giggles as Aech/Helen Harris, the lovable best friend of the story’s main character, Parzival/Wade Watts. Her role in the movie, and the way she inhabited it, filled this ’80s nerd with as much wonder as seeing the ’66 Batmobile and the A-Team van and Back to the Future’s DeLorean and Ferris Bueller‘s Ferrari GT Spyder and Spaceballs‘ Winnebago and Speed Racer‘s Mach 5 face off against Donkey Kong and a T-Rex in the opening scene.

For the uninitiated, Ready Player One is set in a dystopian 2045, where all the world’s power and money have been consolidated by a few companies, fossil fuels are completely depleted, and people now live in places like “the stacks,” communities where old vans and RVs and trailers are piled on top of each other and held together with sketchy scaffolding. The real world is so depressing, in fact, that most people now spend the majority of their free time and work time inside The OASIS, a virtual reality simulation that allows people to be whoever they want to be and do whatever they want to do.

Upon his death, the creator of The Oasis, James Halliday, created a challenge called The Hunt that would determine the fate of his ultimate creation. Oasis users would solve riddles and discover three hidden keys to reveal three hidden gates, and then master the mostly video game-style  challenges inside them. Halliday was obsessed with retro pop culture, especially nerd culture, so Gunters (The Hunt’s players) experienced a surge of sentimentality for everything ’80s-related. 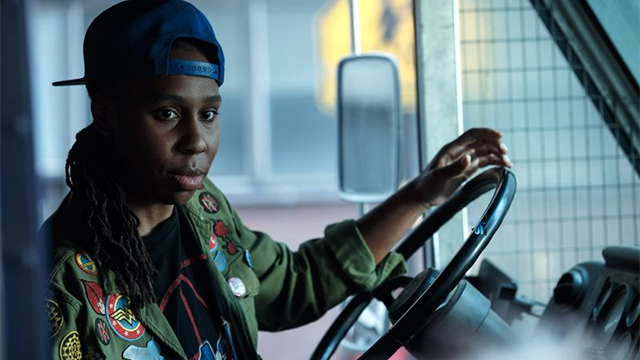 This coat is my dream accessory.

Wade’s best friend is named Aech. In the book, Aech presents in the Oasis as a dude, but near the end of the story reveals that she’s actually a black lesbian named Helen Harris whose mom knew it would be easier and safer for her to move through the even the virtual world as a white man, so she advised her to create that type of avatar and never tell anyone her true identity. The movie skirted that in a really satisfying way by making most of the Oasis’ avatars fantasy-esque humans and so Aech is a giant black guy — like a literal giant — who ultimately reveals herself as Lena Waithe. Brilliantly, Waithe voices Aech inside the Oasis, only through voice modulation software. But it’s her and you can hear it in every line.

“She is just trying to be seen as one of the guys. You know what I mean?” Waithe told The Hollywood Reporter. “It’s very interesting, it’s a real political statement. She likes being a woman but wants to be treated like a guy. Meaning she wants to be treated equally, fairly and with respect. And that’s why she’s gone in the OASIS, to escape sexism.”

Also satisfying: The book waits until the last second to bring Helen’s real identity into the story, but the film reveals the High Five (the Hunt’s top five players) to each other much sooner, meaning Waithe gets to spend a much more significant amount of time as her baseball-capped self on-screen. While the movie doesn’t explicitly have her call herself a lesbian, it does feature a hilarious sequence of her “going with it” with a naked woman inside The Oasis.

The things that make the book divisive are still there. Wade is a Chosen One the way every other white guy in these kinds of movies and books are Chosen Ones. Smarter, better, luckier, mansplainer. His biggest High Five competitor, Artemis, is stripped of her acerbic wit and hyper-competitive spirit and becomes even more of a trophy than she is in the original. And the birthmark on her face that keeps her in hiding is even less prominent in the film. The other two High Five members (and people of color), Daito and Shoto, are one-dimensional sidekicks who don’t ever really challenge Wade’s path to the Crystal Key. And yes, Wade is clearly Cline’s Mary Sue, and the world-building is completely dependent on the actual giants of world-building who created all the robots and Middle Earths and spaceship pilots Oasis users emulate. 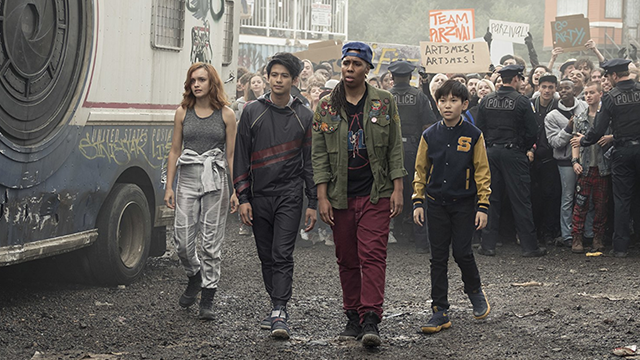 But it’s still a heckin fun movie, full of stunning action sequences and laughs and winks at the kids who grew up watching Back to the Future and Jurassic Park and E.T. and Indiana Jones. I enjoyed searching for Easter eggs on screen as much as the Gunters enjoyed searching for Halliday’s eggs in the Oasis. And that’s kind of the point: It wasn’t just straight white boys who grew up on Spielberg.

By her own account, Waithe had the time of her life working with him on the film. “People say, ‘Is that a dream come true?’ I wasn’t even smart enough to dream that up,” she said. “Like, God dreamed this up for me because I absolutely didn’t.” She was “enamored by his art” when she was a kid so much she felt like she was studying him.

Whether you think Ready Player One is a cynical cash-grab or nostalgic ecstasy, the film answered the story’s main question in real life: Who deserves a seat at the table that shapes the story that shapes the world? The movie’s villains think the table belongs to the billionaire white men who run the soulless corporations that exploit the masses. Ready Player One disagrees — and pulls up a seat for a masculine-of-center black lesbian, no makeup, no apologies, tucked into her fiancée in Vanity Fair, gold tuxedo, kissing an Emmy. This chair belongs to Lena Waithe, the most memorable character in Steven Spielberg’s ode to his life’s work.