Hello and welcome to this Legends of Tomorrow 602 recap, hilariously named Meat: The Legends.

Previously on Legends of Tomorrow, Sara Lance got abducted by aliens, Gary was revealed to be an alien, Sara released pods full of aliens into the timestream, and the Legends recruited a girl who can communicate with aliens. Have you figured out the theme of the season yet?

This episode opens with an alien splattering on the windshield, to remind us of the problem at hand. Ava’s plan is to find one of the alien pods Sara knocked off the ship that took her and follow the clues until they find their way to Sara. Zari supports her interim captain and asks “Gidget” to help them find their first alien anomaly in the timeline. 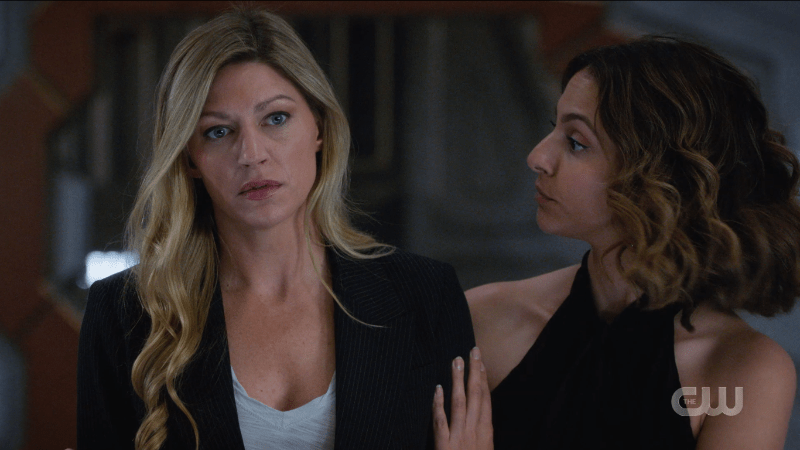 Hi hello yes I am obsessed with this dynamic, more please.

So Gideon sends them to San Bernardino, 1955, the birthplace of fast food, where the news is now showing a Big Bang Burger massacre. So they head back to stop it from happening and find the alien responsible, and they decide to take Spooner with them.

Spooner is resistant, she did what she was asked, it’s time to get the thing out of her head so she can go home. But Gideon tells her that there’s nothing in her head to remove, so now Spooner feels lied to. Spooner is scared of what else the aliens will take, like they took the captain of the Legends, but Ava all but grabs her by the shoulders and says Spooner can’t leave until they find Sara. And it’s not like Spooner can get out and walk. 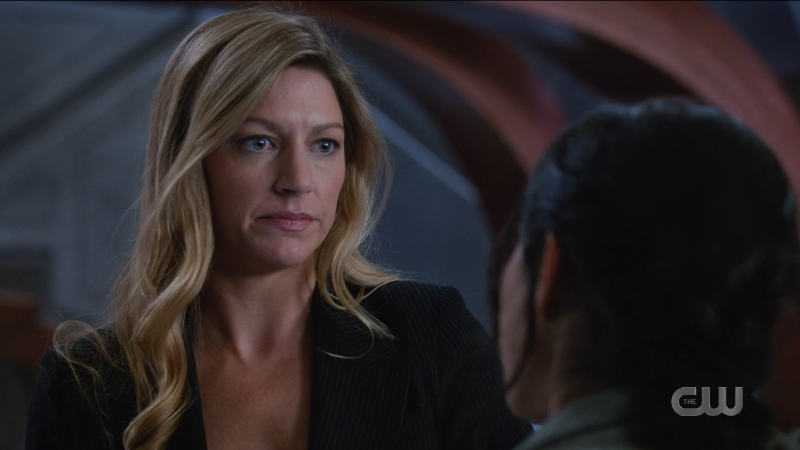 “God help the sister that comes between me and my scisstor.”

Everyone gets dressed in their doo-wop finest and head to Big Bang Burger. They are alien themed like they’re straight outta Roswell and Spooner is NOT amused by the man dressed in a silly little green man outfit.

Ava calls Spooner off the poor teenager working minimum wage in what is bound to be a horrible smelling mascot suit and tells the team to try to blend in and find out whatever they can. 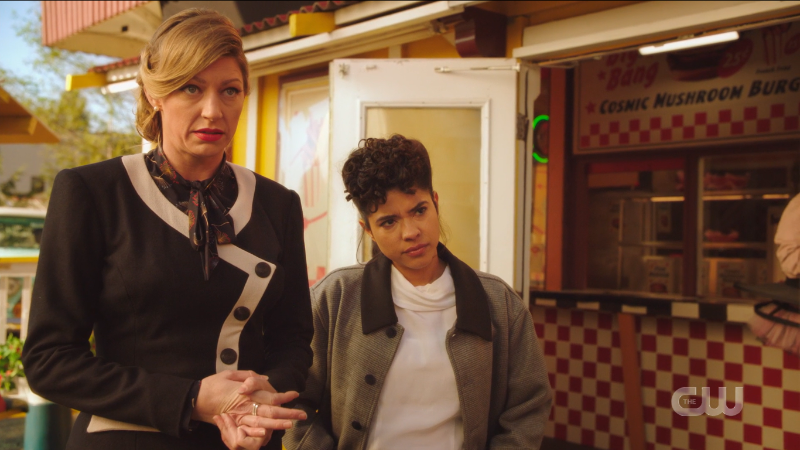 Meanwhile, elsewhere in the multiverse, Sara and Gary crash land on a random planet. All Gary knows about their original destination is that he and his ex-fiance Kayla were hired by a Space Lord to gather the universe’s most dangerous creatures, which tracks much more as a reason why Sara was nabbed. They look outside and see three moons, but what’s weirder is they see…a dog. 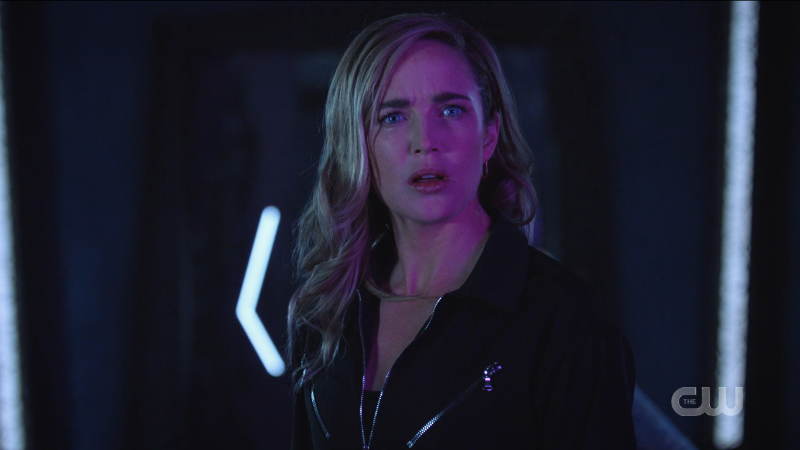 “Dumb dog, why are you following me? No, Gary, I’m talking to you, not the golden retriever.”

Having no other leads, Sara decides to follow the dog, despite how strange and out of place it seems, and despite how Very Nervous Gary is about the whole situation.

Down on Earth, Zari and Behrad discuss the possibility of them maybe starting to share the totem. She’s officially a Legend now, and they know she can use it, and hey to make it easier she even made a custody calendar for them. 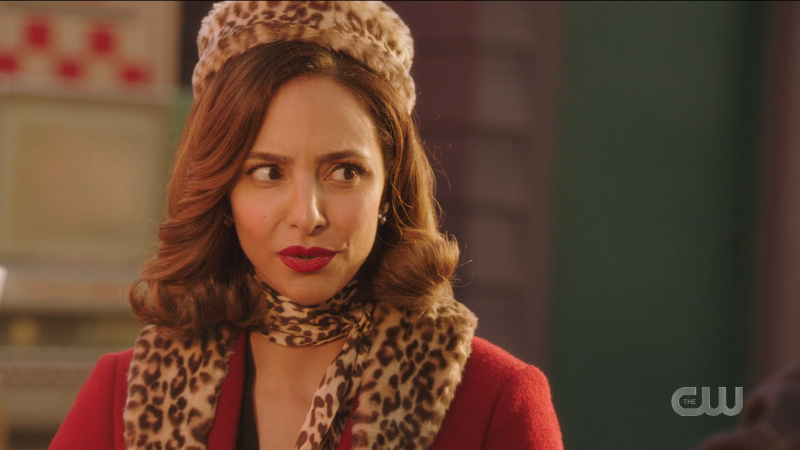 I love that everyone is dressed to blend but Zari was like, “No I want 50s garb but like…ELITE 50s garb.”

But Behrad isn’t ready to give up the totem; he says the totem picked him, and he wants to honor that choice. Zari is annoyed since he actually technically stole it so clearly this discussion isn’t over.

As Ava tries to charm some answers out of uninterested locals, Spooner’s spidey senses start tingling. She can sense an alien nearby, and she can tell it’s hungry. They follow Spooner’s scent until they find a waitress out back, who Spooner promptly threatens. Ava tells her to back down and Mick tells them that he heard the police scanner talk about incidents at the butcher’s too so they know it’s probably not this poor waitress who was just trying to take a lunch break. 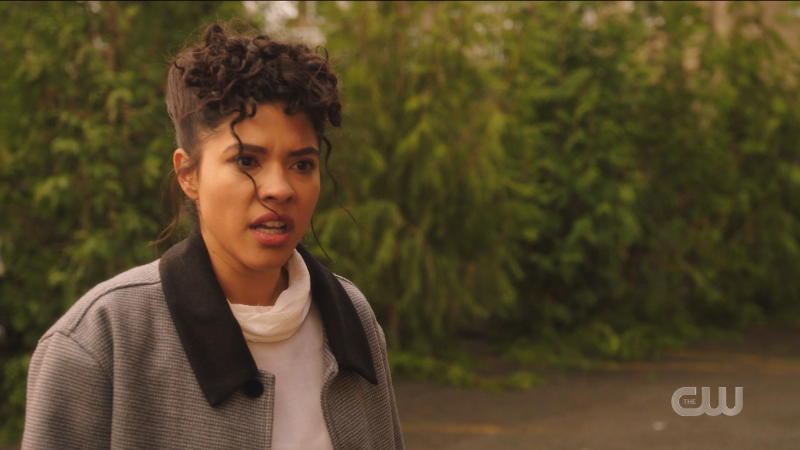 The team splits in two, Behrad beyond ready to lead his half in an undercover burger slinging mission. Nate is always down for whatever his buddy wants to do, but Zari is less than thrilled. 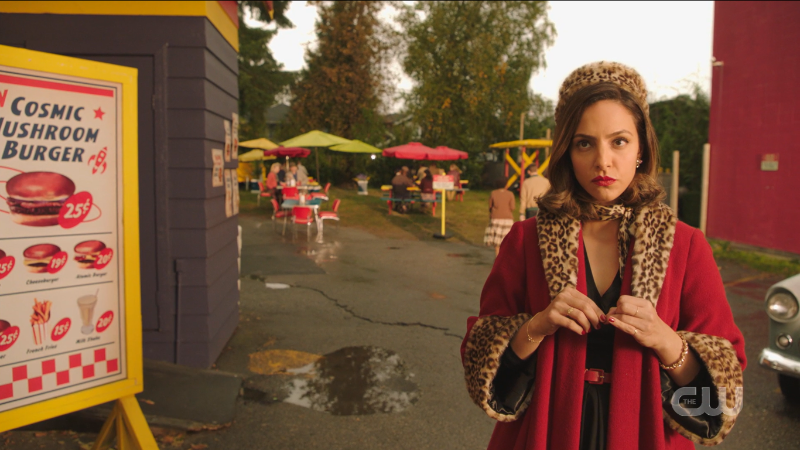 Zari’s reluctant participation delights me to no end.

On the mystery planet, Sara asks Gary to use his alien powers to help them, but he confesses he doesn’t really have any. He comes from a savage planet and that’s why he fell in love with Earth and its capacity for joy. She still doesn’t understand why she was chosen by this savage race of people, but Gary says she’s powerful. He thinks she’s like the women in his deck of feminist playing cards, but I think it has more to do with the fact that she was literally feral for a while. They continue to follow the dog, rightfully wary, but having no other options at this time.

Ava, Spooner, Constantine and Mick go to check out the butcher and Spooner uses her alien mojo to find the cause of the disturbance. Spooner goes to town on the intruder before realizing it’s the Big Bang Burger mascot. Spooner thinks this is actually a brilliant ruse, an alien disguised as a human dressed as an alien. 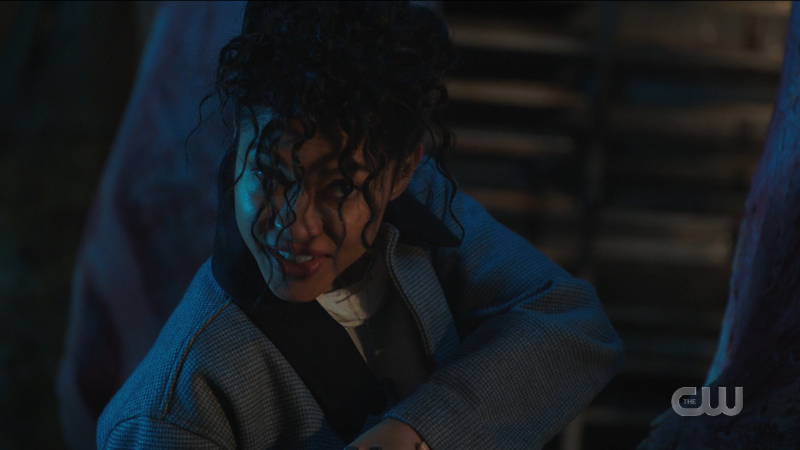 It goes all the way TO THE TOP!

But they look at this teenager with sauce smeared all over his face who is just desperate for meat and can tell he’s no alien. So they decide to take him back to the ship to see what’s up.

Eventually Sara and Gary follow Lassie to a cabin and when a woman runs out of it, surprised to see human-shaped people, Gary is just as surprised to realize that the woman is none other than Amelia Earhart. Sara isn’t 100% sure what’s going on but she knows it’s something. 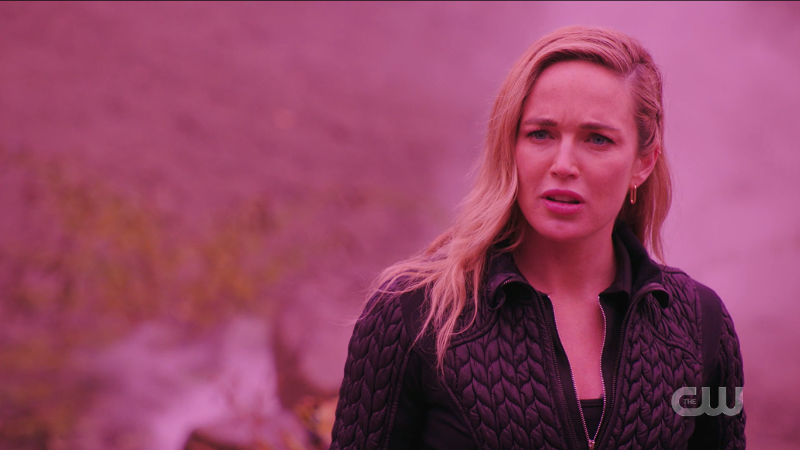 “The lighting on this planet is very bisexual, but I still don’t fully trust it.”

Back at Big Bang Burger, Behrad is really getting into his role as a burger flipper, channeling his teenage years, putting good vibes into every patty. Zari is not impressed. But then Behrad explains that his burger flipping job, and being really good at it, was the first thing he had that was truly just his, where he wasn’t just the Dragon Girl’s little brother. It was when he finally started to step out of Zari’s shadow. This softens Zari a little to Behrad’s shenanigans. Though she’s still just going to drink her Dragon Girl Tea and not help.

On the Waverider, Spooner says that despite Gideon scanning the mascot man as human, Spooner is still getting alien vibes from him. Thinking that maybe he’s being possessed by an alien, Constantine casts some kind of extraction spell, but all that comes out of the boy is goo. SO much goo. And it looks a lot like the secret sauce at Big Belly Burger.

They realize that the goo is an alien parasite and it’s making the town crave meat so badly it will eat itself alive in one big Donner Party Dinner Party. Ava, desperate for answers, asks Spooner to talk to it, but Mick isn’t sure conversing with condiments is going to solve their problems here. 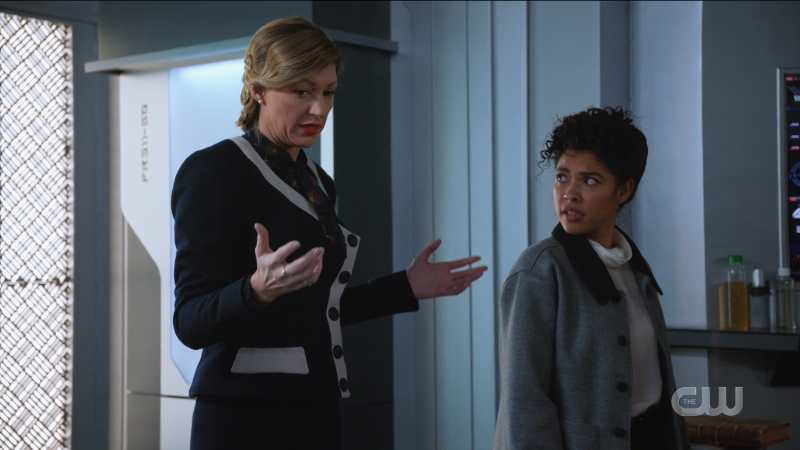 Listen…there’s no way Spooner is straight right? Like this is the outfit she chose, and this is how she stands? She’s queer? Yes? Great. Good talk.

Back at Big Belly Burger, Zari is still quite literally sipping tea while everyone eating the burgers starts losing their minds a little. They get an update from the other half of the team and realize with slow dawning horror that they just fed so many people alien goo.

Zari, Behrad, and Nate try to tell the burger boss what’s going on, but he doesn’t believe them…that is, until they see the waitress from earlier eating raw meat and digging through the scraps for more. 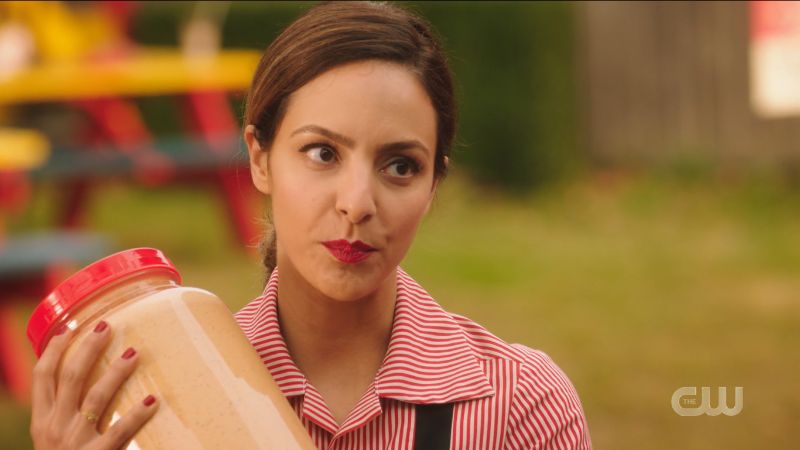 Zari 2.0 now being our default Zari makes me forget how far from actual Tala she is and thus how extra brilliant this portrayal is until she drops a saucy line and it’s just :chef’s kiss:

He tells the Legends that his wife makes the sauce, and even he doesn’t know what’s in it, so Ava gets ready to head to the boss’s home.

In a slightly less terrifying food situation, Sara and Gary are sitting down to dinner with Amelia Earhart as she tells them about how she was flying and then suddenly blacked out and ended up on this mystery planet. She says the food is good, and seems suspiciously adamant about feeding it to them. Sara asks her if she could maybe help them fix their aircraft, and at first she seems excited about the possibility of escaping this planet, of going home, but then she gets more insistent about feeding Sara and Gary dinner… 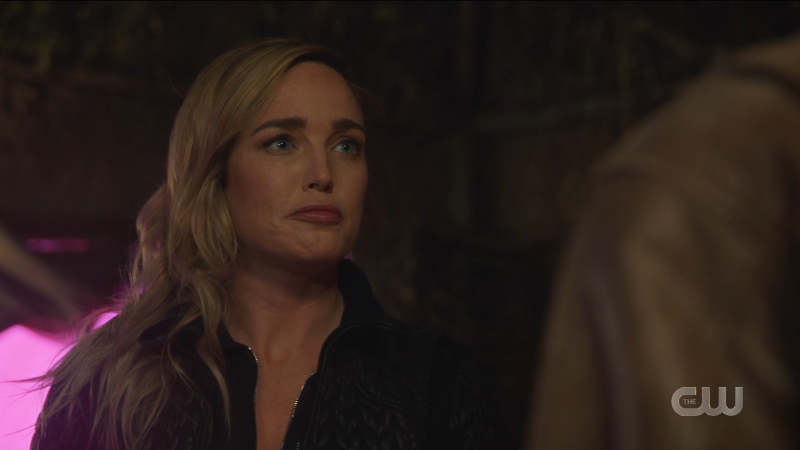 “Is the stew Stu though? Because you’re acting mighty strange.”

As Ava’s desperation cranks up, Spooner yells at Ava for pushing them and trying to hard to save someone who’s probably not saveable. Aliens take things, you lose people, sometimes that’s just life. But Ava steps up into her face and gets the most unprofessional she’s been in a long time by telling her quite literally to shut up. She doesn’t want to hear that kind of hopeless talk when it comes to Sara. She will never stop trying to get the love of her life back. Never. 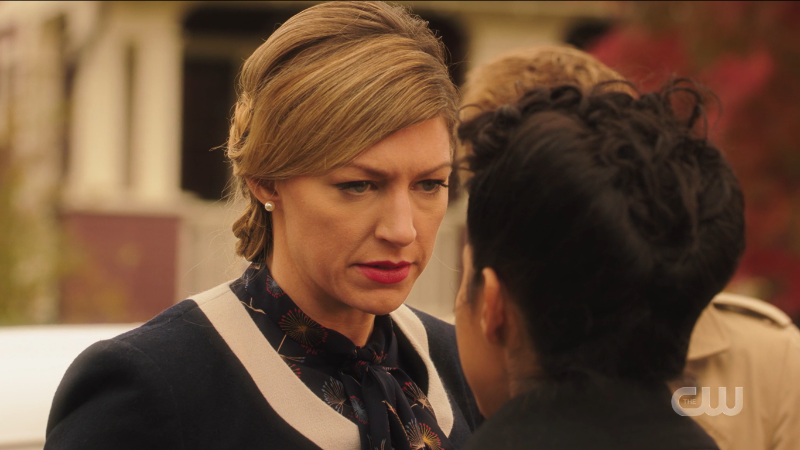 I think I would spontaneously burst into tears if Ava ever glared at me like this.

Ava goes to chat with the wife, and in what I thought was a cute little moment, she forgot when she was, and said she was with the police and was startled when Mrs. Burger asks which police officer she’s married to. Ava remembers herself and says her “husband” is new so not to worry about it, then butters her up and asks her about her sauce, which Mrs. Burger swears her secret is rice vinegar. 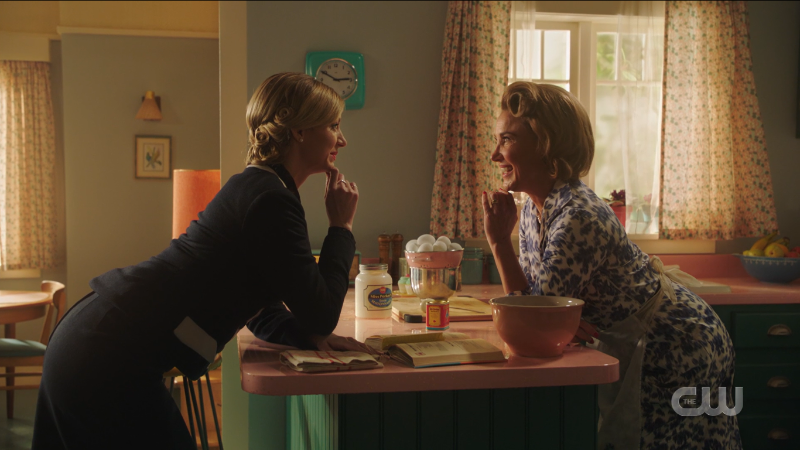 Ava putting on her best 50s housewife act added a year to my life.

But as Ava starts to leave, some secret sauce drips on her head and she realizes there’s something sticky going on upstairs.

Time is running out because people at the Big Bang Burger are zombie hoarding their way in to get more meat, so Spooner and Constantine sneak into Mrs. Burger’s garage the same time Ava sneaks into her attic. Spooner finds a pod like the one Sara was locked in on the spaceship, and Ava finds a cocoon that is dripping a disgusting substance that looks suspiciously like the secret sauce.

But Mrs. Burger isn’t about to let her recipe get out so she bashes Ava over the head with a hand mixer.