Hello, friends, this is a Batwoman 213 recap called “I’ll Give You a Clue” — and let me give you a clue: it has one of the best superhero show team-ups ever.

The writers really woke up and chose rage love with this episode y’all, and it was a rollercoaster of fun and puzzles and team-ups and feelings the entire time. So buckle up, friends, we’ve got a puzzle to solve!

Previously on Batwoman, Ryan and Alice teamed up against False Face, we sort of met New Face Kate, Sophie used the Batsignal as her own personal Batwoman pager, Snakebite Jake continued to do Snakebite I guess, and Ryan said goodbye to Angelique who headed into witness protection.

It’s five years ago, and we’re at Blackgate Penitentiary with rookie Sophie Moore, hair a bit shorter and attitude as biting as ever. She’s checking in on the first person she’s put behind bars, a man who goes by the name of Cluemaster and who refuses to believe that Sophie could have solved his puzzle on her own. She wishes him luck and walks away, never to see him again! LOL, sure.

Back in the present day, Batwoman is fighting more members of False Face (okay real talk, how big is this gang? I feel like their numbers are multiplying??) and I need to give another shout out to the fight choreographer for this show because WHEW CHILE, this fight was beautiful! Ryan has the last guy right where she wants him when the useless Crows interfere yet again. Luke tries to convince Ryan, over comms, to let it go, but ya girl isn’t about to let this slide. Luke responds with a “here we go” that can only be delivered by someone who’s tried to talk Ryan out of reading law enforcement for actual filth many a time, and read them she does. Homegirl lays out exactly how she was about to use a tracker to follow this fool to Black Mask, thus taking down Gotham’s current most wanted, but the Crows are so shite at their jobs that they not only screwed up her plan, but they also gave her enough time to strategize her escape. And for only the first time in the episode, she ziplines away. 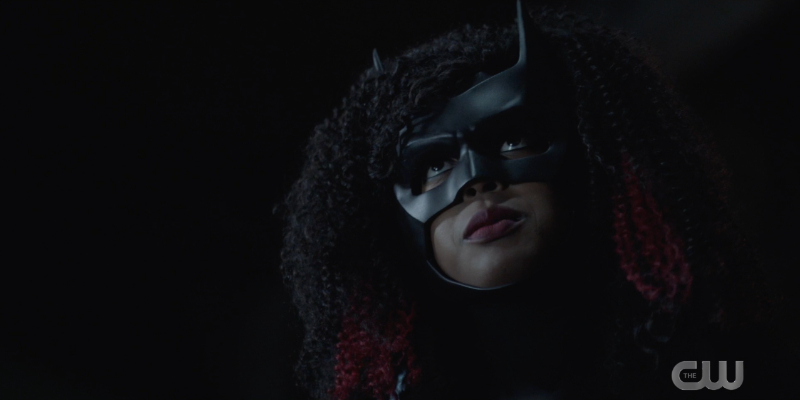 “If this dude doesn’t hop off me, I swear to Rao…”

Meanwhile, Snakebite Jake is doing Snakebite at a park and hallucinates young Kate and Beth on the swings.

At Sionis mansion, Black Mask is torturing Alice and demanding to know Batwoman’s identity (get in line, bruh). I couldn’t help but notice CirceKate’s knife twirling mirroring Alice’s butterfly knife twirl that we’ve come to know and love. Have we ever seen actual Kate flip a knife around like that? I truly cannot remember. Am I going to ignore that fact and chalk it up to knife spinning being in the Kane girls’ DNA for the sake of my headcanon? Yup. Anyway, Alice denies being friends with Batwoman and becomes the embodiment of that TikTok trend where people share what they’d talk about nonstop if they were ever kidnapped or tortured. Black Mask attaches Alice’s finger to a terrible and medieval looking torture device in the hopes that it’ll spur her to comply. 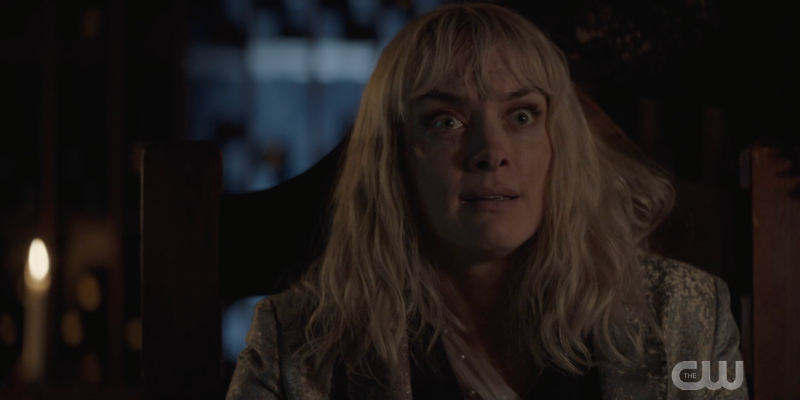 “I know COVID has changed manicure procedures, but surely there’s a better way.”

Ryan arrives home after a seemingly dramatic shift at The Hold Up, ready to go in on some vegan wings with Mary, but she stops in her tracks because an uninvited Crow has flown into their loft. It’s the way Ryan asks “Why is Crowphie here?” and the way Sophie closes the scene with “there’s a lot we don’t know about each other yet, Ryan”, for me y’all. I promised myself I wouldn’t spend this entire recap ALL CAPS yelling about pretty much everything that happens from this point forward, but CAN WE TALK ABOUT THIS TRIO FOR A MINUTE PLEASE?!

The way Ryan and Sophie banter with each other, and with Mary thrown in as referee, was inspired. These actresses have the kind of chemistry with each other that, I imagine, showrunners dream of. It’s also such a testament to the writers that Sophie coming out as a lesbian to Ryan was not the most interesting part of the episode. It did make me scream though, I won’t even lie to you. Anyway, Sophie and Mary are having themselves a girls night with very expensive tequila courtesy of Sophie’s Crow co-workers celebrating her fifth anniversary with the organization. Ryan eventually decides to join them, and then the fun begins. 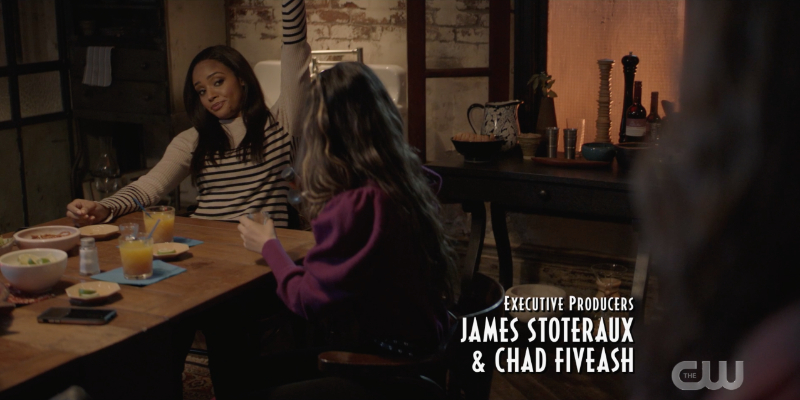 “Raise your hand if you’ve used alcohol as a coping mechanism rather than dealing with your trauma!”

My new favorite trio (I reserve the right for this designation to change depending on which characters are thrown together, thank you very much) settles in for a friendly game of Never Have I Ever during which we learn that Ryan accidentally sexted Mary, Mary had sex on an airplane, and all three have been saved by one of the Batwomen at least once. At first, Sophie is confused about how Ryan could save herself, but Ryan clarifies that it was the OG Batwoman. Sophie starts to do that thing where she’s pretty much begging Ryan to come out as Batwoman by dropping hints about knowing her identity and throwing hella shade left and right. 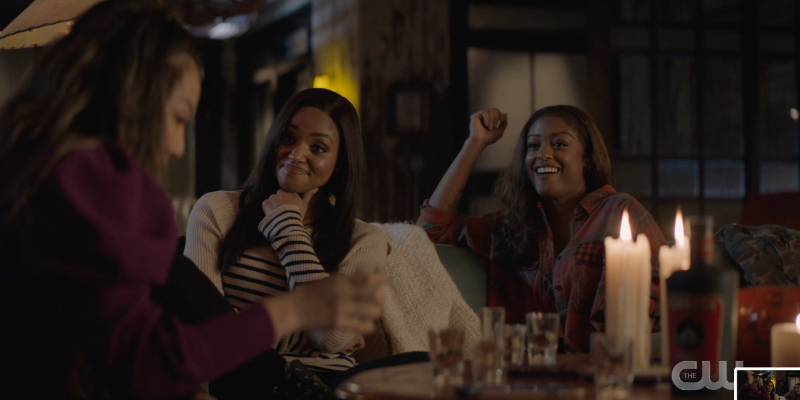 When your friends can’t help but be impressed by your sky high escapades.

As Mary refills their shots, she finds a venomous caterpillar in one of their glasses, and Ryan discovers a note on the tequila packaging. The note is from Cluemaster, and Sophie is the target. 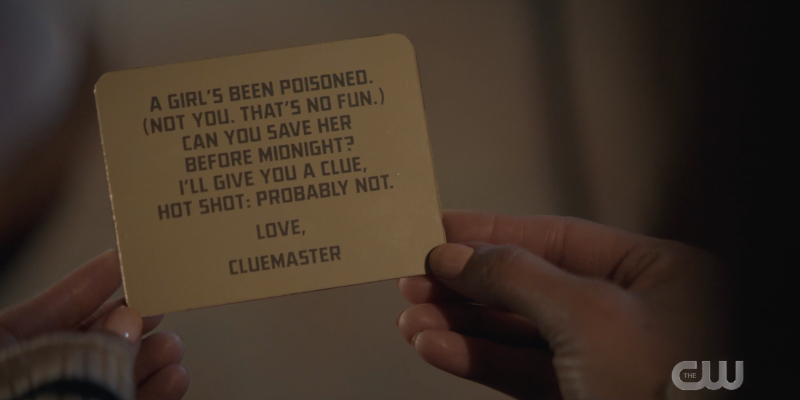 “If there was a problem, yo, I’ll solve it. Check out the hook while my DJ revolves it”

Sophie tells the gals that Arthur Brown (aka Cluemaster) was the host of a Jeopardy knock-off called Quiz Bowl who got fired and went on a murder spree complete with clues for law enforcement to decipher in order to figure out his next victim. Ryan learns that Cluemaster managed to escape Blackgate that very day to get revenge on Sophie, who he believes is the only person to have cracked his puzzle. The group reads the note again carefully because Cluemaster doesn’t use any word accidentally, and they realize “Hot Shot” is the clue. Ryan lights a flame against the bottle, a move that both Mary and I agree is VERY sexy, which reveals a symbol that Sophie immediately recognizes. 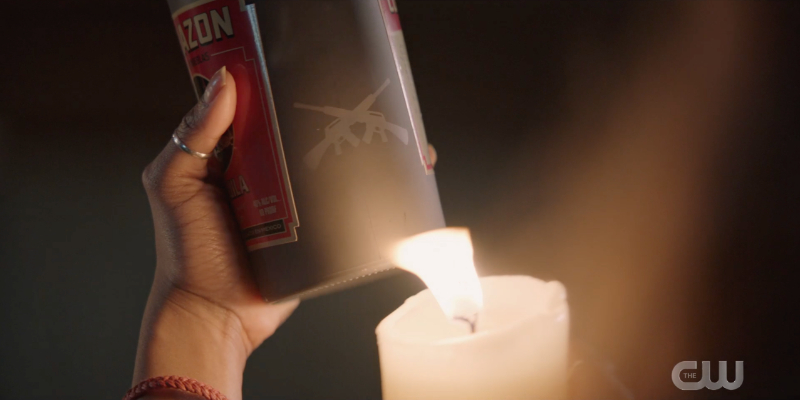 Meanwhile, Alice speeds up the fingernail torture process, but I’ll never actually know what happened because I had to close my eyes. Can’t do finger- or toenail horror, friends, sorry ‘bout it. She knocks out CirceKate and momentarily escapes to call none other than Snakebite Jake for help. Later in the episode, Mary laments that her father has lost pretty much everything, and it’s clear that Alice is in a very similar boat. Anyone who could have possibly helped her out of this situation is either dead (Mouse) or out of commission (Ocean), and Alice probably hoped that despite the many times he’s tried to kill her, her father might care enough about his daughter to save her. Unfortunately for Alice, Jake is hopped up on that sweet sweet snake juice and distractedly tells her that she has the wrong number. The desperation in Alice’s voice as she pleads, “Daddy”, broke my heart into one billion butterfly knife shaped pieces. 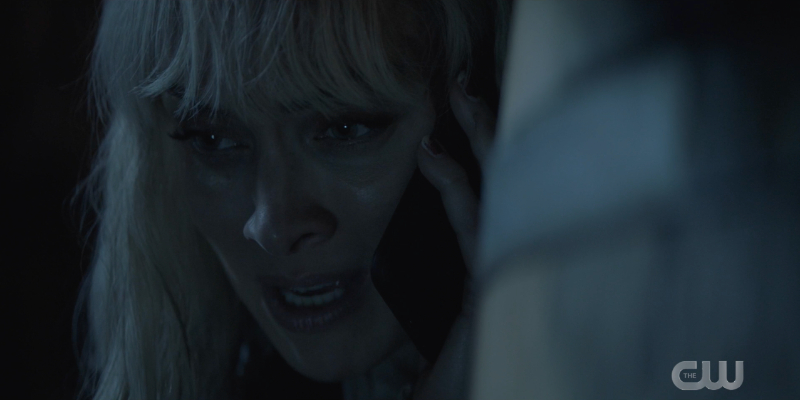 Ryan, Sophie, and Mary arrive at the shooting range that the symbol on the tequila bottle led them to, and they climb over the fence onto the property. Well, Sophie gives Mary a boost over the fence and refuses to give Ryan one either because she’s testing Ryan’s Batwoman skills or because she assumes because Ryan’s a felon, climbing fences comes easily to her. Either way, it results in some A+ flirting. I mean, bickering. Once inside, Sophie reveals that she wasn’t actually the one who solved Cluemaster’s puzzle; a girl called the Crows tip line with the answer. Sophie kept the informant’s identity a secret because, as she reminds Ryan, she can be trusted. After searching the area, Mary finds an antihistamine that will counteract the poison. As she lifts the jar, flood lights illuminate a woman locked in box several hundred feet away. It’s Stephanie Brown, Cluemaster’s daughter. 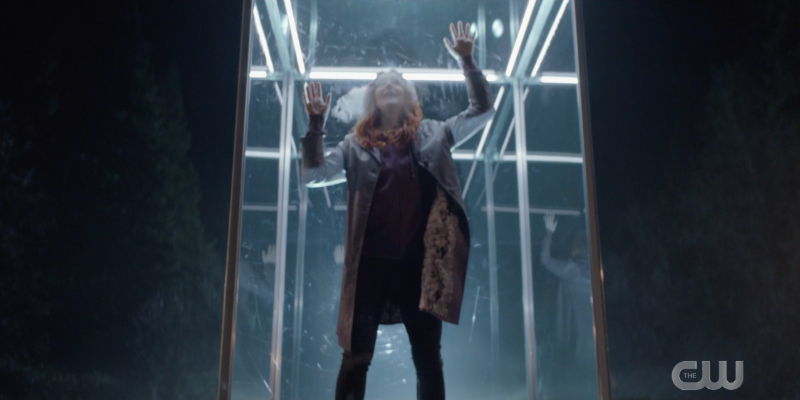 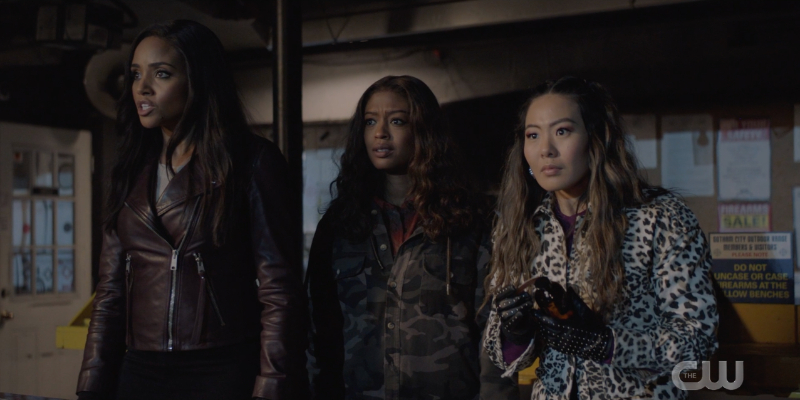 Shocking literally no one, after two lines of dialogue, I’m in love with Stephanie. Do we think the Batwoman writers are like “okay, so I know there is an abundance of attractive women on this show but WHAT IF we just keep adding new ones every week to watch the viewers’ FREAK OUT?” That’s definitely happening, yeah? Ryan tells Stephanie to relax and Steph hits her back with a “My dad poisoned me and locked me in a box, you relax!” and when I tell you I got a full belly laugh out of that one, whew! They find another puzzle that, once solved, will free Stephanie from her see-through prison. Mary asks Ryan and Sophie to release each other’s necks (and step on mine. Jk, not that part.) for two seconds so they can figure out the puzzle and wouldn’t you know it, they solve it after a very adorable squabble over the difference between a bobcat and a puma.

Listen, I hate guns. Always have, always will. But for some inexplicable reason, watching a fictional lady wield fictional guns is SO HOT. Despite Ryan’s insistence that she’s just as good a shot, Sophie immediately takes charge, nails all four targets, and turns to Ryan before asking “any questions?” And then, I passed away. Look show, if you don’t want me to ship Wildmoore, please tell Javicia and Meagan to have less chemistry while they bicker. (I’m kidding, please don’t do that.) Once Ryan picks her jaw up off the floor, Mary gets the antidote to Stephanie who reveals a bunch of Blindspot-esque numbers and letters written all over her body; Cluemaster isn’t done toying with them yet. 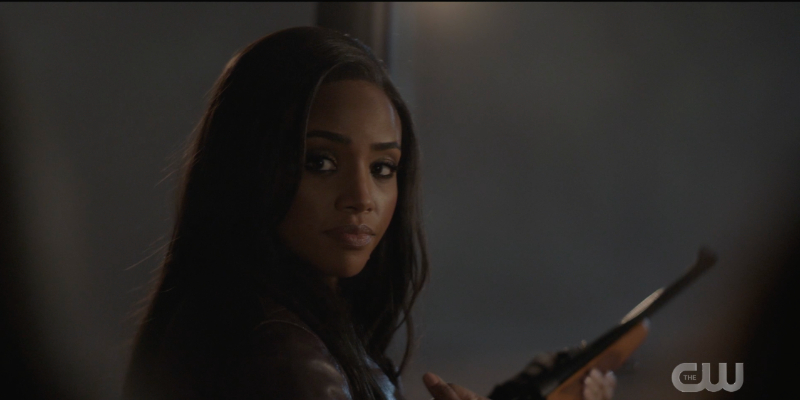 Sorry, I passed out. What’s happening?

CirceKate has Alice tied back up and describes gauging the eyes out of some CEO’s head while she was in Arkham, and Alice realizes that she remembers this happening; she puts two and two together and identifies her captor as Circe Sionis, even though she thought Circe was trampled in the Arkham riot.