Hello and welcome to this recap of Legends of Tomorrow season 7, episode 11, “Rage Against the Machines,” aka the (second) one directed by Jes Macallan.

We waste no time and pick up right where we left off, in Sarajevo, 1914, with everyone in the Fixed Point celebrating the fact that Sara and the Legends successfully prevented The Great War. When the bartender realizes Gideon and Gwyn aren’t celebrating, Gideon lets it slip that she’s still nervous because of the RoboLegends, and the time travelers all rally to help the Legends fight them. Gideon tries to call them off, but it’s no use; they are a mob now, there’s no stopping that train. 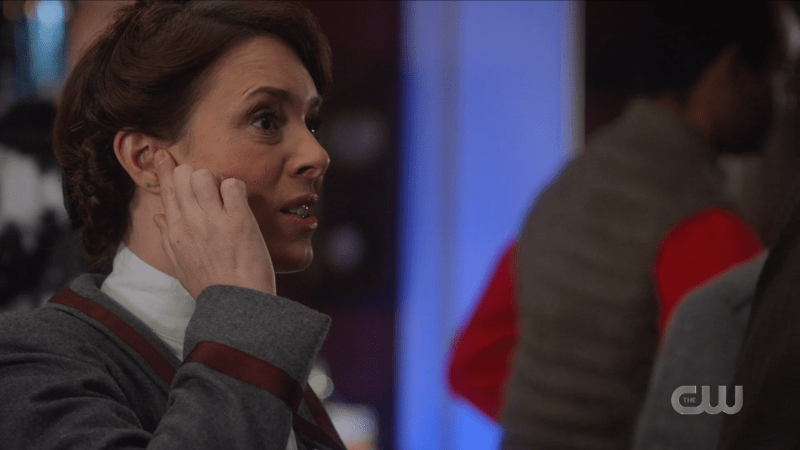 I hate it when I accidentally start a riot.

Out in the field, Sara is reiterating her plan to ambush and seize the Waverider as soon as it lands, wondering what Gideon’s evil army will look like. An army of Avas? A bunch of Bishops? A gaggle of Gideons? They are very not prepared when the Waverider lands and releases a load of Legends. 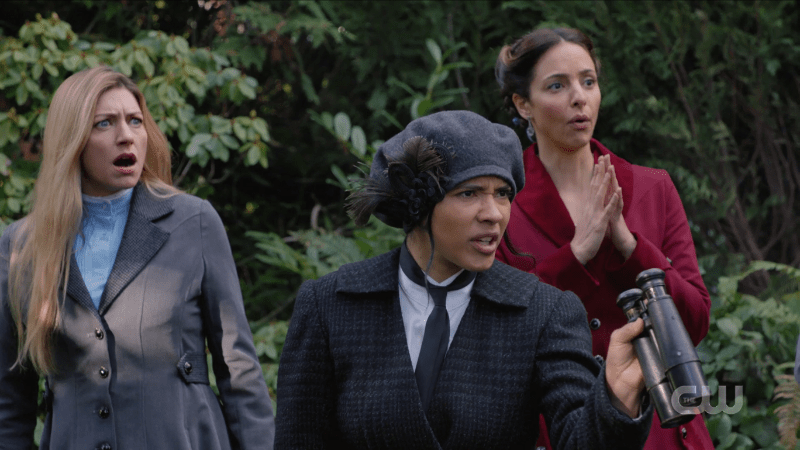 After shaking off the initial shock, they realize not all of the RoboLegends disembarked, so they need to draw them off the ship. At first it looks like the mob of time travelers will do the trick, until they realize the mob is being obliterated without the RoboLegends having to move all that much. After seeing Gen Z³ murdered, Behrad loses his cool and launches himself at the RoboLegends, causing the rest of the Legends to back him up. But then Ava gets shot almost immediately, so the Legends double back, Sara scooping up her wife and getting her team to safety.

The team regroups at the Fixed Point while the RoboLegends focus on righting the timeline by killing Archduke Ferdinand, which Eobard Thawne was already working on doing since Sara’s head-start was over. But, of course, the RoboLegends aren’t known for their subtlety, so when RoboSara finds Eobard, she kills him dead. 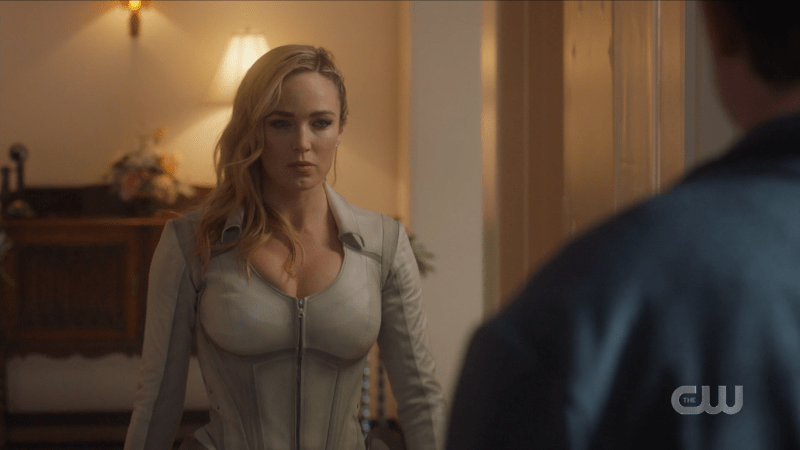 Meanwhile, RoboBehrad manages to follow the trail of Ava’s blood all the way to the Fixed Point, but luckily, upon seeing a gun pointed at Gideon, Astra is able to muster up enough magic to take him down and protect her team. 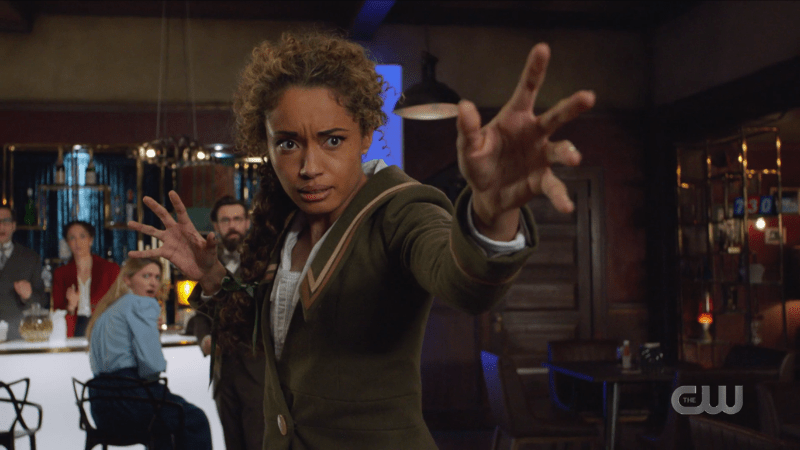 I want to know exactly what spell this was.

Sara finds Eobard just as his last breath leads him and when the Time Bracelet falls off his wrist, she remembers her promise and picks it up, though luckily for all of us she doesn’t put it on just yet. She heads back to the Fixed Point and is pleased to see her wife passed out drunk because at least that means she’s not in pain. The team looks to her for their next steps and is surprised when the ex-assassin doesn’t suggest a butt-kicking plan of action, but instead…a conversation.

Even Zari, who loves talking, isn’t so sure this is a great idea. 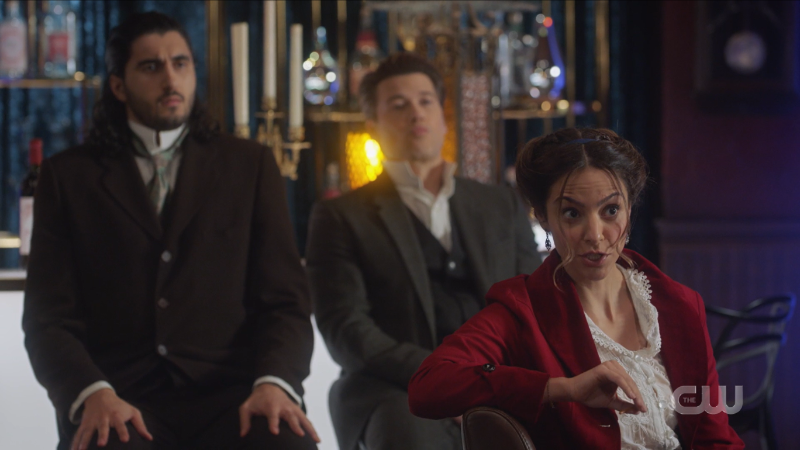 This is exactly why I’m polite to my Google Home Mini. So I never have to reason with robots in the future, they’ll just be on my side.

But Sara says that technically their end goal is the same: to get the Legends back to the point in time they belong. Gideon thinks this is a great idea and wants to help, but Astra tells her to get her human butt to the manor right this instant, and Sara not only agrees, but thinks all of the Legends should follow suit. She is, after all, the only invincible one among them.

Sara gives Ava one last “babe” and shuffles them off to Buffalo, taking RoboBehrad’s comm and asking for a parley. Gwyn, a product of wartime, wants to help her, but she shoves him through the manor door, too. No flesh-and-blood Legend will be dying on her watch.

Sara finds RoboNate first and asks to talk to his captain, and when RoboNate says that he’s the captain, Sara scoffs and says, and I quote, “That’s a choice.” 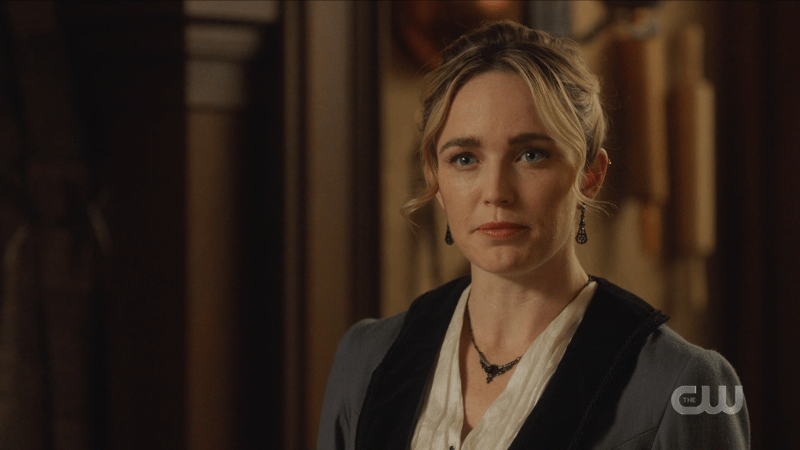 Also RoboNate was doing what felt like a Tr*mp impression and it was really upsetting.

Sara tells RoboNate about how she just wants to bring her family home, but RoboNate has an objective he has to fulfill: He has to kill the Legends. And he’s willing to kill Sara as many times as it takes until she tells him where the rest of his team and her wife are.

Sara underestimates how beefy he is and gets her neck snapped pretty quick, which sends Gwyn into a panic attack until he remembers all the times the Legends have been kind and gentle with him, and then he regains his faculties long enough to get Sara back to safety.

When they’re back in regroup mode, Gwyn tries to return the favor of grounding him and gives Sara a pep talk of his own. Realizing that Gwyn has more tactical experience than the Legends, and that probably the best way to outsmart the Legends is to have someone on the outside directing them, Sara hands the battle planning over to Gwyn.

Gwyn’s plan sounds a lot like playing hide and seek, which pisses Astra off at first. But when he insists they’re just outsmarting them and that she’ll be able to take down a RoboLegend if she wants, she gets on board.

Since BehradBot is dead, they know exactly who to send in as a spy to infiltrate the Waverider. He will have to be the one to disable Evil Gideon while the melee fighter Legends distract the rest of the RoboLegends by causing aberrations.

As soon as Behrad boards the Waverider, he’s confronted by RoboSpooner and RoboGary, and he does his best to keep up appearances, eventually convincing them he has to visit Dr. Sharpe for an upgrade. He instead heads for the mainframe and runs into RoboZari, who seems to be the only one allowed in the server room. (Yes I’m just using computery words with little to no knowledge if they’re the right ones like I’m in a Critical Role NordVPN sketch, don’t @ me.) 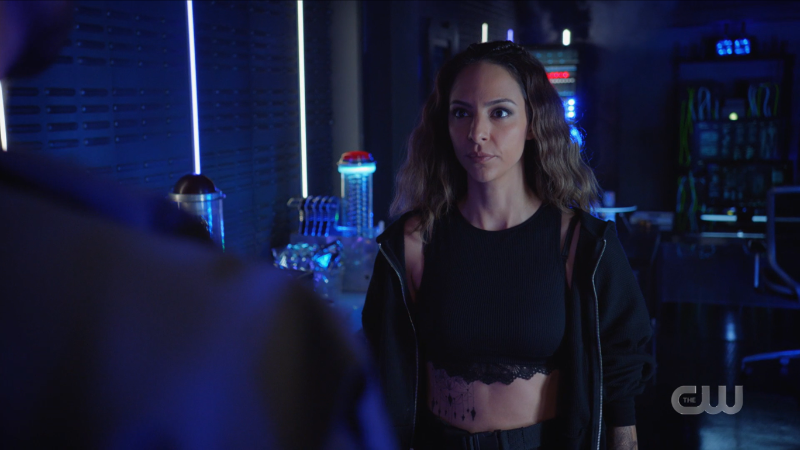 I just think we have room in our lives for three Zaris! Something to consider.

Realizing he can’t be the one to get away with this, Behrad returns to the mansion by way of the singular bathroom on the Waverider and tells Fancy Zari it’s going to have to be her.

When she asks about her role and her motivation, Behrad tells her that RoboZari looks like a 90s hacker aka pre-Arrow Felicity) and because she’s #extra, instead of getting actual hacker Flannel Zari, Fancy Zari takes this as an acting challenge and starts getting into character while she heads off to find the right outfit. 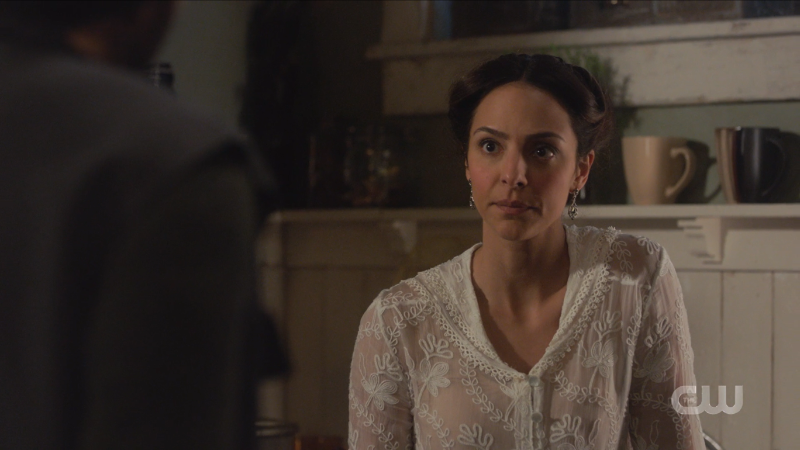 “Okay so this will be like the time Tatiana Maslany played Cosima playing Alison. Got it.”

Gideon wants to help, too, but Astra snaps at her like an overprotective mom who isn’t on Gentle Parenting TikTok and tells Gideon she won’t be going anywhere on her watch.

Team Aberration heads out to disrupt the timeline with singing fish, VR tech, and Star Wars spoilers. (Fun fact: I’ve never seen a single Star War, and the other day in a group chat, my friend Callie redacted a Star Wars spoiler, and when I informed her that I was not trying to avoid them, she said that the spoiler she redacted was the fact that Darth Vader was Luke’s father. I proceeded to laugh my entire ass off and said, “I have been a human on this earth consuming media for decades, this fact did not elude me.” And this episode happened to beautifully prove my point just a few days later. As someone who has had people in my twitter mentions maliciously spoiling things on purpose, this was a very sweet act of kindness on my considerate friend’s part, but I did think it was adorable that she thought I somehow didn’t know this. After all, I know Pitch Perfect by heart.)

This mayhem plan works because RoboSara and RoboNate are hot on the Legends’ heels, stamping out these aberrations gleefully, and when it proves to be too much for them to handle alone, RoboSpooner and RoboGary finally leave the Waverider, too.

Unfortunately, this does not leave the Legends as in the clear as they’d hoped, because Dr. Sharpe and RoboAstra find Behrad to give him his upgrade. 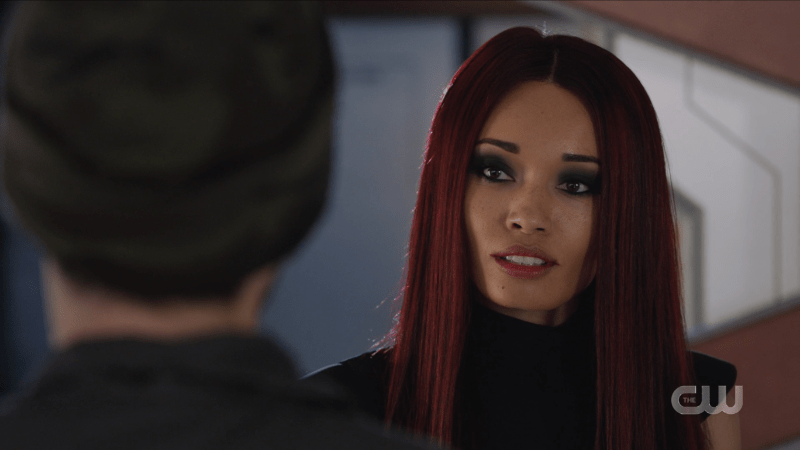 She can upgrade me any time she wants. Just saying.

Luckily, he was prepared for this possibility and tricks them into drinking a bit of poison that sends them both rushing for the bathroom. Entering the stall lands them in the Manor, where Gary welcomes them by shoving them out into the plane of fire.

After doing this duty, Gary runs into Gideon, who is playing nurse to the wounded Ava. Gary offers to help but Gideon quickly denies him; playing Florence Nightingale to her captain seems to be the only thing she’s allowed to do around here without Astra snapping at her, so she’d rather keep at it to feel helpful.

Outside, Spooner runs into RoboGary and convinces him that she’s RoboSpooner in disguise, which works because all versions of Gary are a little dumb and also human Spooner can understand his alien language. She manages to Uno Reverse him and when RoboSpooner shows up, RoboGary gobbles her right up, grenade and all, much to human Spooner’s amazement. 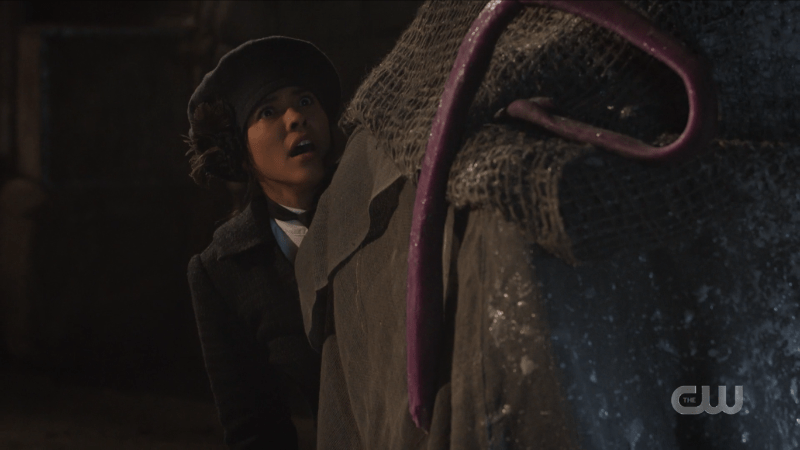 Please why is she still wearing this hat!!!

After seeing how upset Gideon is, Gary goes to talk to Astra to ask why she’s been yelling at Gideon all day. Astra says she’s just trying to protect her squishy human body, and Gary realizes that her maternal instincts were triggered by Gideon almost getting hurt. Astra realizes that she does feel protective over Gideon, and she did sort of create her, but she snaps at Gary and says she’s not her mother. Though to be honest, she doesn’t look like she’s even fully convinced herself. 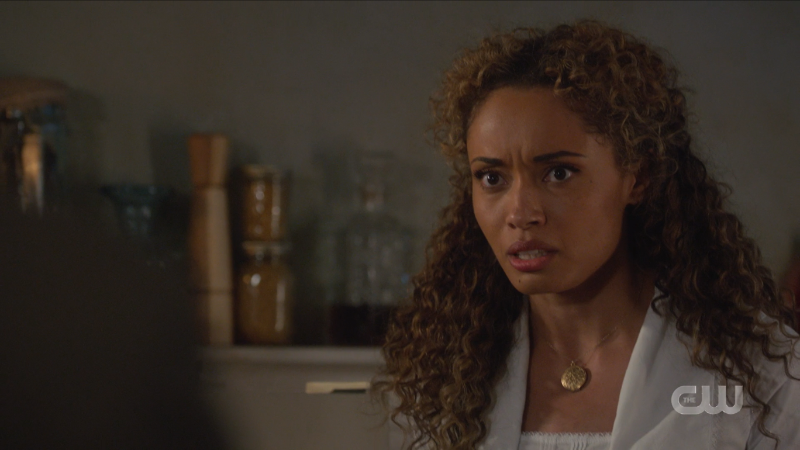 “Haven’t you heard, we keep our feelings in little boxes here on the CW.”

Gary smiles at her and calls her Mama Bear but she DEFINITELY hates that so she shoves him away and gets back to work.

Valerie has written 386 articles for us.