Hello and welcome to this recap of Legends of Tomorrow Episode 613 aka the One Where Mick Gives Birth Through His Noseholes.

We pick up where we left off, with Sara looking shocked and a little angry to see an all-too-familiar face. Sara grabs a knife smoothly off a table as she walks by and confronts Bishop face to face. He doesn’t want to fight her though; he wants to answer her questions. He promises he’s the last version of himself he’s able to print because of her explosion, but she’s not keen to trust him; he kidnapped her, manipulated her. He swears he’s changed, and wants to prove it, wants to fit into this band of misfits. She decides he’ll fit best in the holding cell instead. 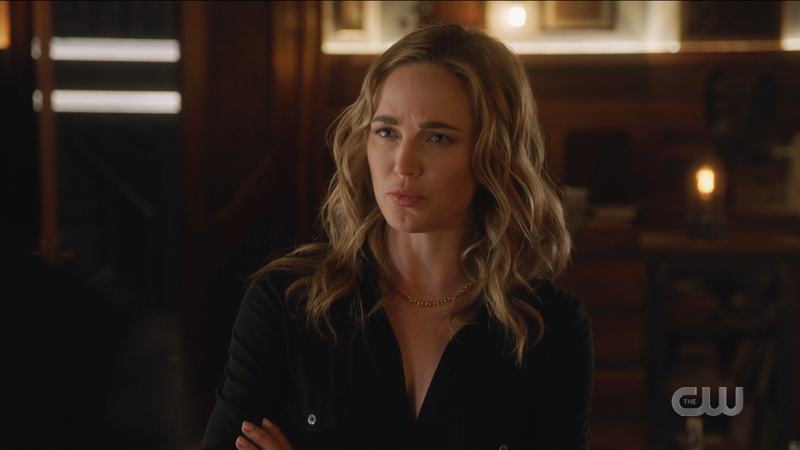 “Remember when Damien Darhk was a blight on this show and we couldn’t get rid of him and everyone hated it? Don’t be like Damien Darhk.”

More Legends gather round to get a look at the man who kidnapped their captain. He’s different than they expected; maybe a little less of a brute than they were imagining. He smarmily smiles at the team, he knows them to some extent, especially Ava. He’s known many Avas, but this is THE Ava. 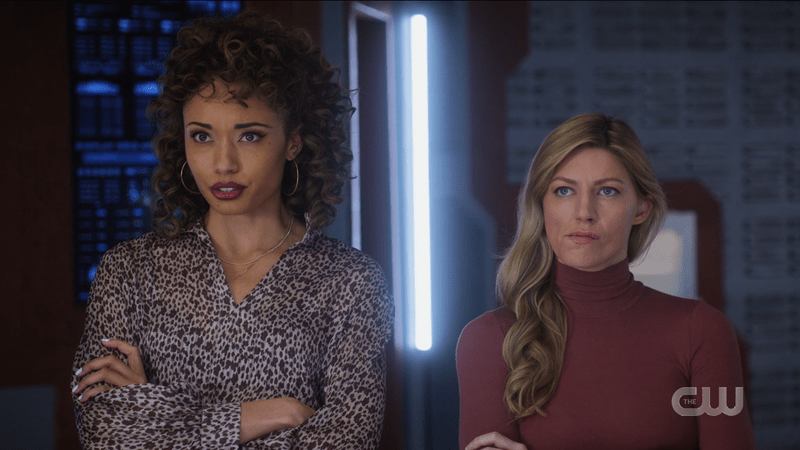 LISTEN. I’ve met Jes Macallan. Jes Macallan is tall. Olivia Swann TOWERING over her?? I know it’s probably partly because of shoes but I am LIVING for it.

He wants to chit chat but Sara ignores him. She has everyone leave except Spooner, who is given permission to laser beam him on sight if he does anything untoward.

He promises he’s not going to try to escape, but the ladies aren’t about to take this skeeze at his word. 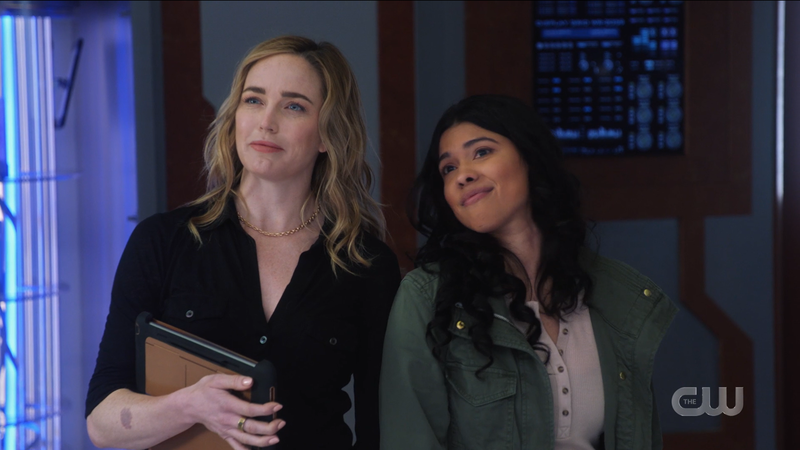 I love this big sister, little sister vibe these two are starting to develop.

Ava wants to try to get in his head and find out why he’s really here, what he really wants. She thinks she can do it; he sort of made her. He sort of made Sara, too. They’re like the Adam and Eve of clones, made in his image. Sara is worried about leaving Ava alone with him, but she begs her so Sara allows it. Ava is thrilled. 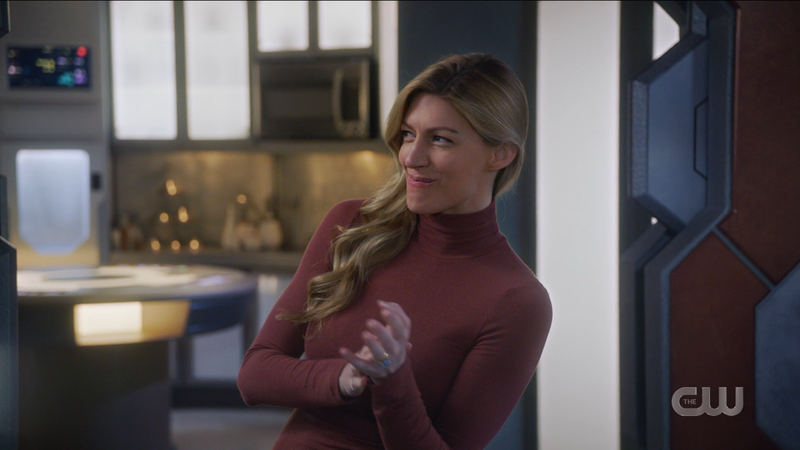 “Gonna channel my inner Anna Torv and Mindhunter the hell out of this.”

Then we go to Constantine, who is on his own show, which I hope gets cancelled much like the actual Constantine show. Luckily, Fancy Zari is realizing what we’ve known all along: that she deserves better. He feeds her more reassurances, more lies, and Zari is, quite frankly, over it. 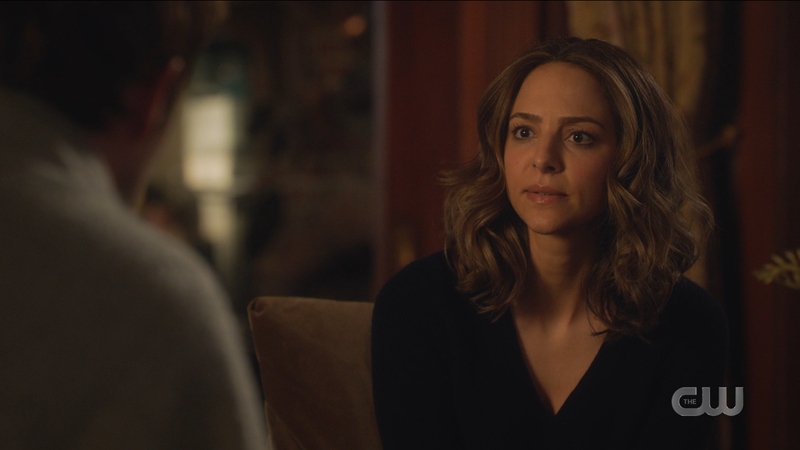 Maybe if we get rid of Constantine we can afford to greenscreen both Zaris into more scenes together.

Zari goes to Astra to try to get a truth serum or some way to get Constantine to tell her what really happened when he went to drink from that magic fountain and why he came back wrong. Astra says that she’s not the one who can help her here; Spooner was with him, why don’t we start there?

Sara and Nate watch a live feed while Ava chats with Bishop. He says some true things, about how this Ava is special, about how Sara was on a planet of Avas but turned the universe upside down just to get back to HER Ava. Ava starts to walk away and keeps him hungry for more conversation, playing him like a fiddle. 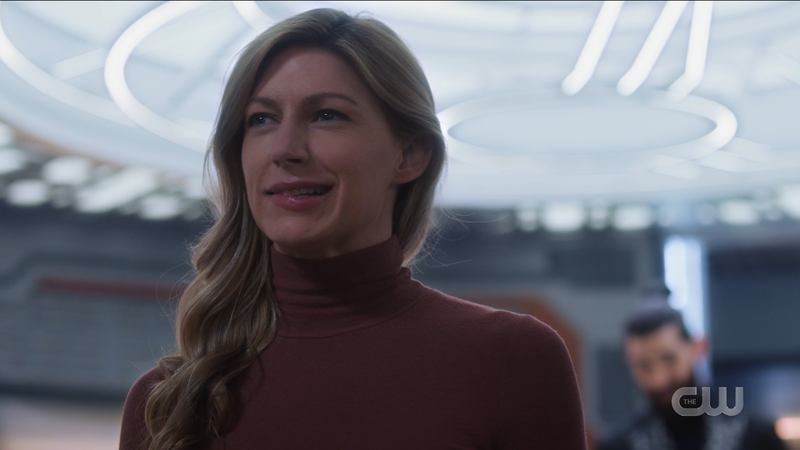 I still want to listen to an episode of Ava’s true crime podcast.

Sara is so proud.

Bishop admits he’s a narcissist and says that Ava and Sara are the closest things he has to family because of the clone connection. He says Ava’s model was always his favorite; she rolls his eyes and echoes her archetype: Bossy Ava. But he says he wanted it to be Boss Ava. Marketing changed it to Bossy. He also considers her, specifically, to be a bit of a marvel. Clones weren’t meant to be able to fall in love. Bad for business.

Ava uses this to her advantage, claiming maybe that’s why she’s having a hard time picking details for the wedding. He offers to help, and when she starts to leave, he offers her something else in addition: he can help deliver Mick’s babies safely, so they don’t eat his brain. 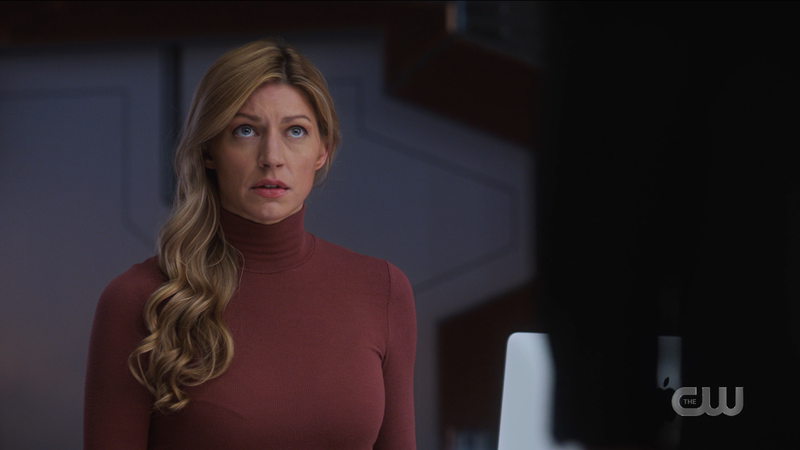 “And…getting his brain eaten…would be…bad? Right right of course bad, horrible, no we don’t want that. Of course…”

The team follows the recipe for a nutrient smoothie for the fetii and Sara ends up eating some because it tastes good to her alien taste buds, the way banana baby food tastes good to some adults. This grosses Ava out and I bet she wishes she’d go back to mainlining cherries.

Zari and Astra find Spooner and ask her about the trip to the fountain, but as Spooner goes through it, she realizes there’s a sizable gap in her memory. A blank space, a dropoff. They realize that Constantine fucked with her memory and are furious, but Astra says she can help; unlike Constantine though, she will require Spooner’s consent. 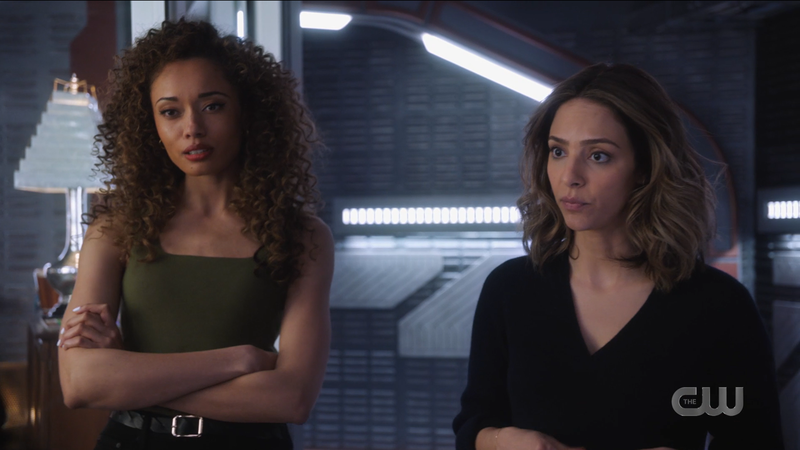 Even the literal queen of hell knows more about consent and respecting women than Constantine.

They give Ava Spooner’s laser gun and leave her to guard him as they go sort this out.

Bishop was eavesdropping and wants to help Constantine, but Ava rejects his offer.

Sara and Nate, appropriately, play chess while they watch Ava play Bishop and wait for Gideon to finish her scan of his DNA. Nate wants to bet that Ava figures out what Bishop is up to before the can is through, but Sara never bets against her girl.

Ava brings Bishop her wedding binder and realizes she likes cacti and the color grey and doesn’t understand the concept of appetizers. She asks why Bishop made her so weird. 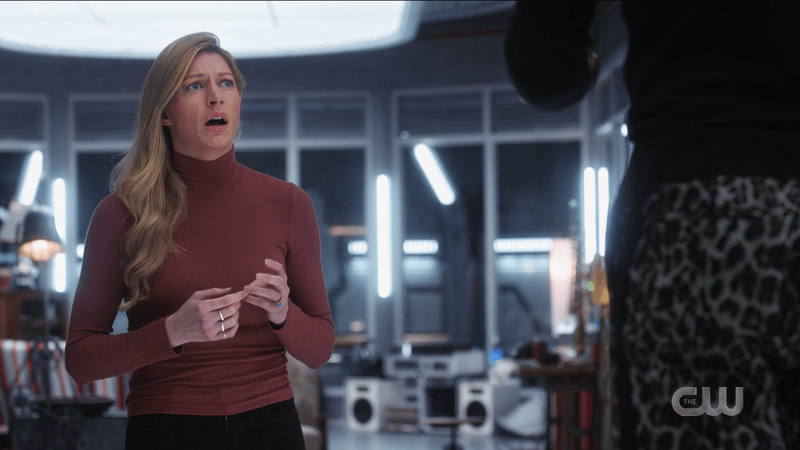 Me @ the universe every time I love a show everyone hates or vice versa.

He says that she’s her own person now, that her life is her own. He set the ball rolling, but she forged her own path.

She smiles and thanks him for his help. 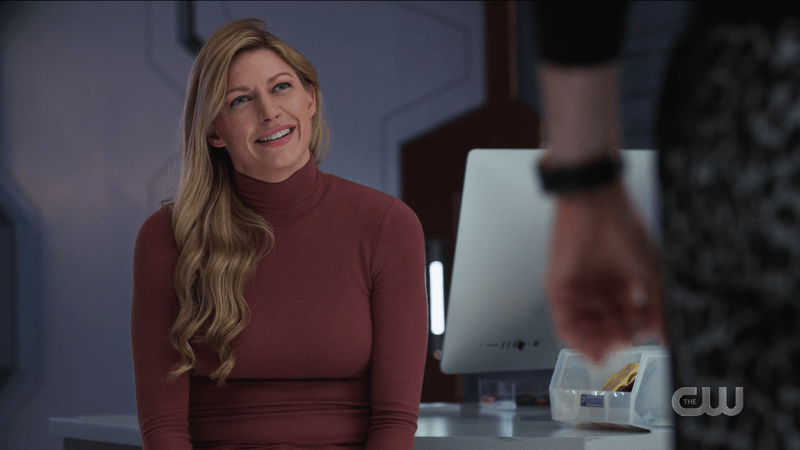 Jes Macallan really brought her best face game to this episode. A+ work all around.

Softened, he admits he’s been cloned over 200 times, tweaking each time, tinkering, in the hopes of improving. Ava asks how this version of him is different from the one Sara met, and he says it’s humility, but from where she sits listening in, Sara doesn’t believe him.

Astra, having received the necessary consent, does some magic on Spooner to try to recover her memories. Spooner biting down on a belt while Astra cast a spell on her did nothing to quell my Spatula ship. 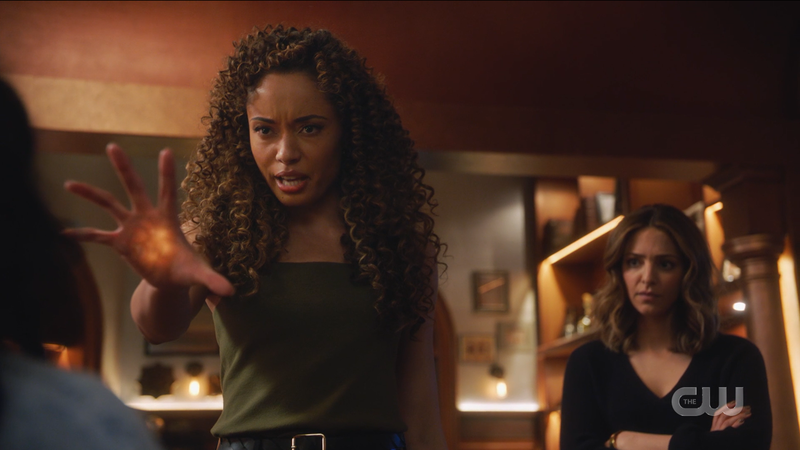 Spooner remembers everything, and tells them about how he didn’t drink from the fountain, and that his magic returning is from a little vial he drank.

Zari is ready to storm off and break up with her “lying dumpster fire of a boyfriend” on the spot; if he was lying about that, who knows what else he was lying about. Who knows if he’s dangerous. But Astra has grown to love these gals,and knows just how dangerous an off-script Constantine could be, so she doesn’t want Zari to go face him alone. 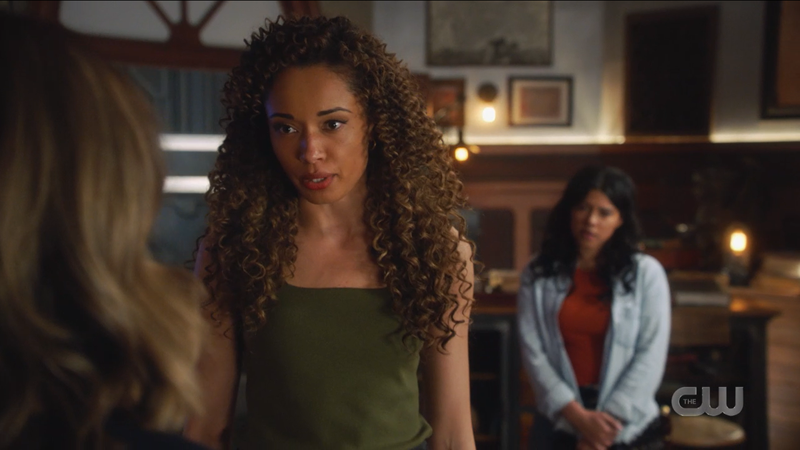 THIS is character growth. Astra is the perfect example of how they can take a flawed character, a ‘villain’ even, and fold her into the team. Whatever they’re doing with Constantine ain’t it.

Bishop gives Ava some wedding advice, including some music that he asks her to do a father-daughter dance to. He knows Sara is watching so Ava shuts off the feed, but Sara isn’t worried; she trusts her girl. Ava likes the song Bishop picked, and says it makes her want to smile and cry at the same time. She asks him if he designed her that way, and he asks why it matters. Whether she was programmed to feel them or not, she feels them all the same, so how is that different from anyone else’s?

Next page: Love is not a lie! (And Beat Constantine blah blah I don’t care.)