Good morrow and welcome to this Legends of Tomorrow Episode 612 recap, aka the one with the murder mystery.

We open this week with the Legends trudging back to the Waverider after their bowling extravaganza, some reluctant to leave the lanes, some more eager to get back on the ground (and out of rental shoes.) Plus, it’s time for the Zaris to switch places; and it’s almost like the writers knew I, a lowly recapper, was struggling with calling them “Original Zari” and “Zari 2.0,” emotionally, and gave me not only Flannel Zari last week but this week gifted me a new nickname for the other Z: Fancy Zari.

When the Captains try to get the Waverider back to Earth, Gideon informs them that the jump drive was damaged so they’ll have to take the long way home. Which means they’ll be stuck on the ship for three weeks. 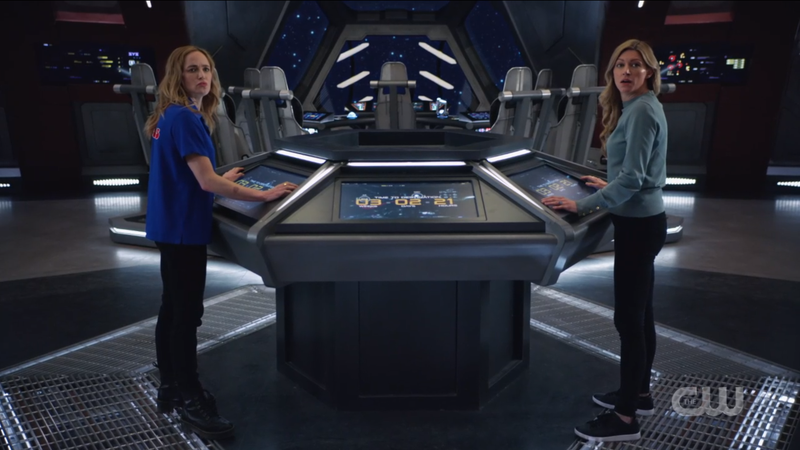 Try being in quarantine for 523 days, then we’ll talk.

Ava and Sara go back to their room to start wedding planning. Of course, Ava is uber-organized, and Sara is starting to lose interest fast. 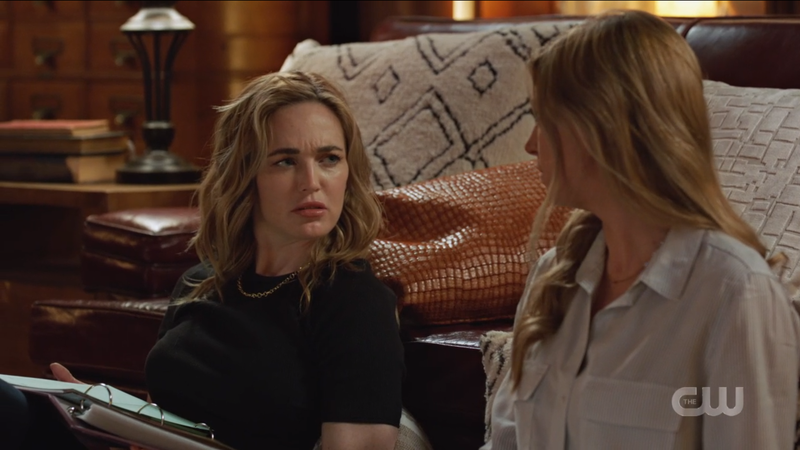 “I think you should put the Gotham fam at the same table as the National City kids. And please don’t invite Clark and Lois, I’m sick of them.”

She does look through the tiered guest lists Ava has made and notices that Barry Allen is on the very bottom rung and she asks her fiancée why; she likes Barry Allen. Who doesn’t! But Ava points out that where The Flash goes, trouble follows. She specifically mentions dangerous metavillains, but I would also like to remind everyone about how many times Barry Allen has royally screwed the timeline up.

Sara looks up at the travel timer to see if, by some miracle, they had spent a whole day doing this already, and notices that the clock is going UP instead of down. When she asks Gideon why, she explains that it’s because of the power being used by the team. 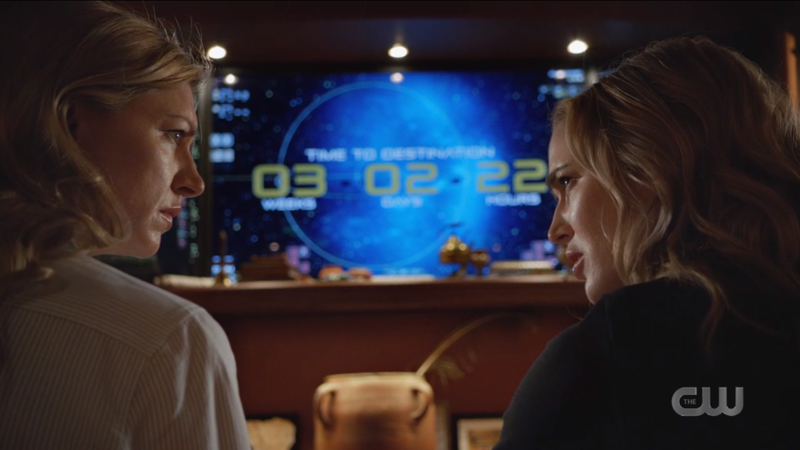 “It’ll be fine, like taking an iPad from a baby…”

Sara finds Behrad and Nate playing video games and unplugs them, Ava stops Astra from using the food fabricator; if they want to get back to Earth in a reasonable amount of time, they need to unplug.

Constantine doesn’t feel like that will be a problem for him though, because he has his magic go-go juice. Though it’s definitely taking its toll; he does some cosmetic magic for Zari and when his hand cramps up, he takes another slip to ease the spasm.

On day 3, Behrad is leading a yoga class when Constantine comes barrelling in, ruining everything, as per usual. He tries to showboat with his magic by adding more candles around, which Behrad could have overlooked, but when Constantine starts to disrobe, Behrad draws a line. The boys fight a little until Constantine storms out and Fancy Zari is annoyed with them both. 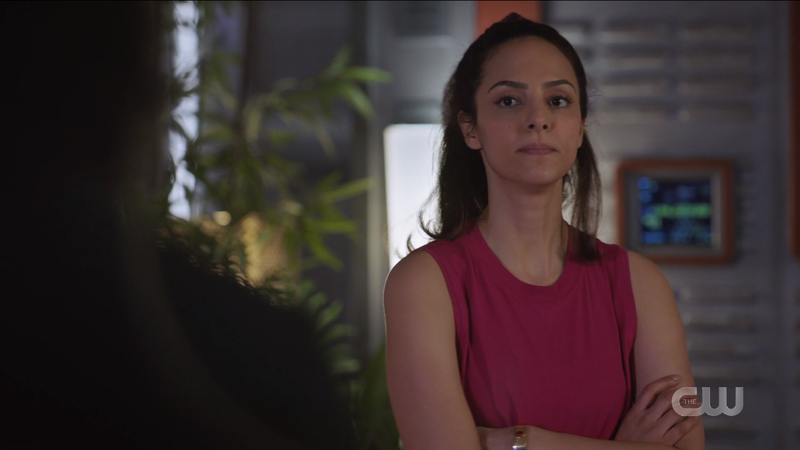 Me @ Twitter for changings fonts in the middle of a goddamn pineapple express.

Sara and Ava are still, somehow, talking about wedding invites, and are discussing whether or not to invite their almost-family; Ava wants to invite the actors who were hired to play her parents, and Sara wants to invite the Black Siren, who is technically her sister but just from a different timeline. You know, classic wedding stuff. 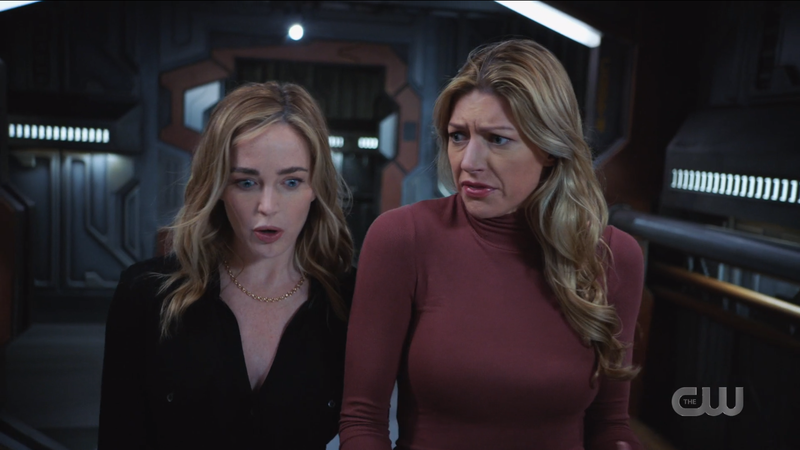 You know, for two absolutely stunning human beings, these two sure make it hard to grab a shot of them both making reasonable faces at the same time.

When they look around at their lil Legends, they realize everyone is starting to go a little stir crazy, so Sara finally agrees to let Gary run his game. It’s sort of like a combination of Clue, mafia, a classic murder mystery, and something a little more supernatural. They all pick characters, and of course, they all end up being eerily appropriate. The goal is to find out who amongst them is the Beast and accuse them before they kill all the Humans.

Gary starts to set the scene, but Constantine hasn’t ruined anything in approximately ten minutes so he feels he’s due. He uses his magic to level things up and yeets them into the game. Including a setting that looks just like the manor, and costumes that look just like their character cards. 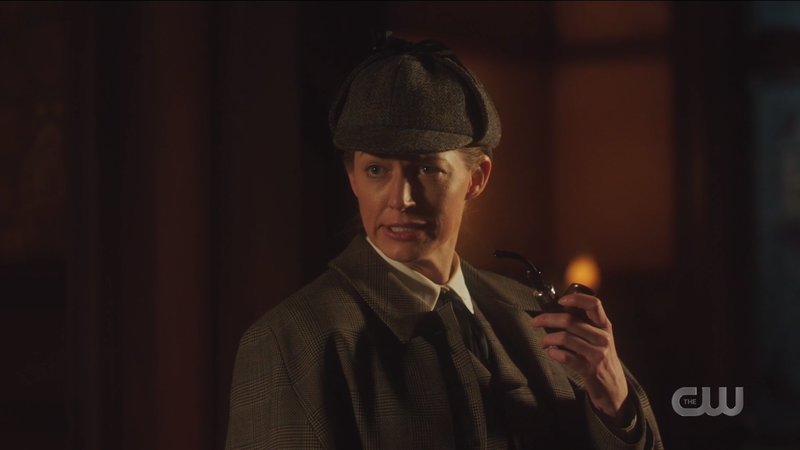 I would watch a Sherlock Ava webseries, just saying.

Constantine promises them everything is fine and that as soon as they beat the game, they’ll end up right back where they started. They can still hear Gary narrating, but the poor guy is all alone on the Waverider.

Sara, the Black Widow, decides to get really into her role so she doesn’t have to talk about the wedding for a bit. 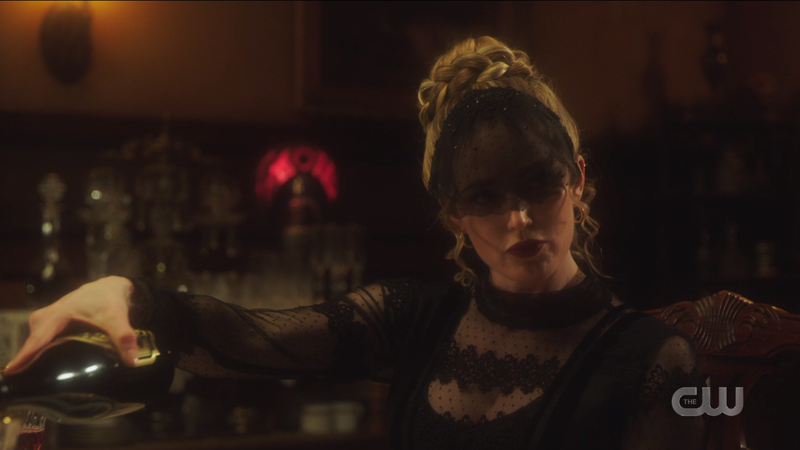 I bet Caity Lotz would do that femme-to-masc trend on tiktok really well. In fact…I think most of the women in this cast would.

Back out in real life, on the Waverider, Gary and Mick hear a distress signal from someone nearby. Gideon was left with strict instructions from her Captains to not use any excess energy that would delay their return to Earth, so all they can do is brace themselves.

And as the doors open and the smoke clears, who should emerge but the one, the only, Kayla!! 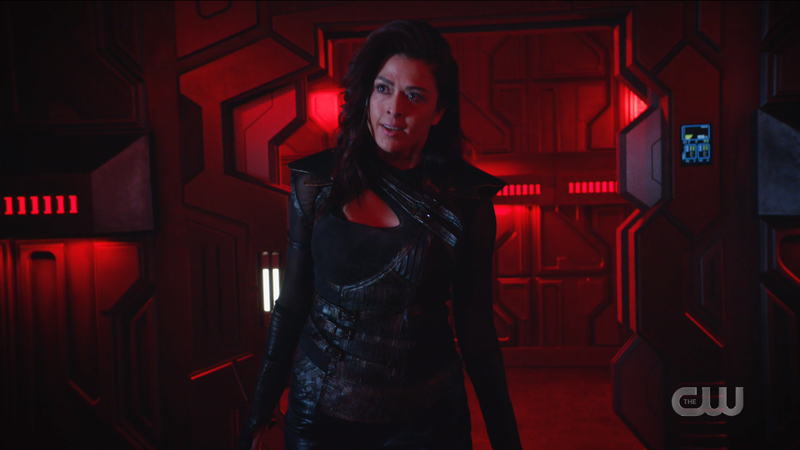 We love a girl who knows how to make an entrance.

Inside the magical manor, the game progresses, and despite being the one with the best shot of solving the mystery, Detective Ava is the first to be struck down by the Beast. 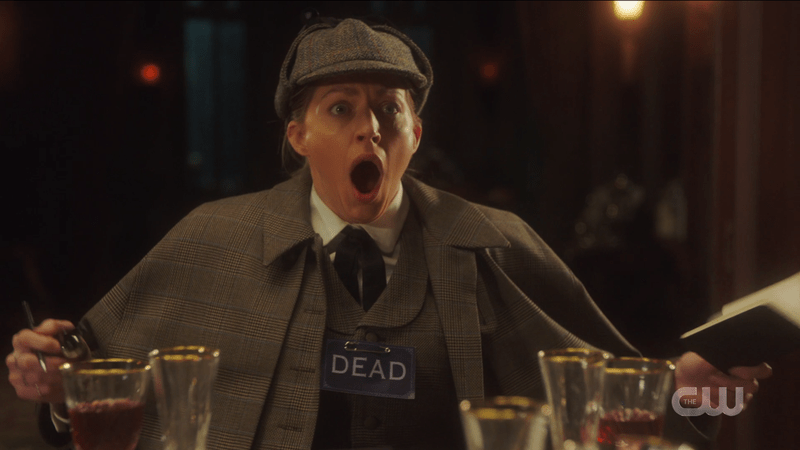 That feeling when you get hit with a stun spell in the first round of combat and you just have to watch your friends dungeon and dragon without you for ten minutes.

Sara shoos her off and the team starts to deliberate, Sara still leaning into her role, and she leads them all by playing the game. They all deliberate and ultimately vote that Nate is the beast, but as soon as they say that, Nate drops dead, a knife in his back, a card imploring them to try again.

Slowly they start to realize they’re feeling more and more like the caricatures they were assigned, and Sara suddenly feels the weight of her role of Widow and rushes out to find Ava slain just like Nate.

Things are getting too real now, so Sara starts to reveal that she was the beast (because of course she was) but before she can even get the sentences out, she’s struck down right beside her love. 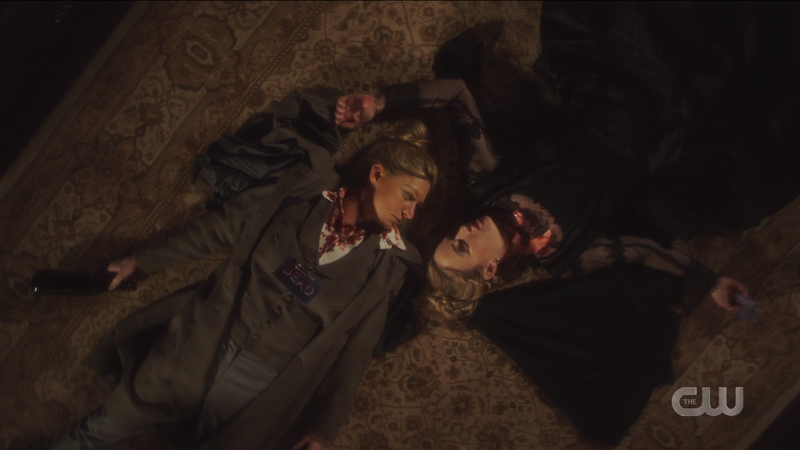 The Unkillable Gay Squad is really going through it this season.

The rest of the Legends realize that their cards have all gone blank, except for Sara’s, which now says, “You’re all going to die in here.”

Back on the Waverider, Kayla is on a one-alien mission to find her ship, but Gary and Mick tell her that it’s back on Earth, which will take them weeks to reach. They realize she’s injured so they take her to the med bay to reprint her missing tentacle, and in return for that and a ride to Earth, she offers to fix their jump drive.

Next page: Not all surprises are good surprises!!!