I know that I am probably the last queer in queerdom to still be obsessed with this lady, but I love Lana del Rey. When I heard that her video for “Summertime Sadness” was lesbian-themed, my hopes were high. I’ve been let down by Lana del Rey’s Potential Lesbianism before, and I didn’t think I could take another blow. Remember when we though she made out with Jennifer Lawrence but it was actually her sister? This is why we can’t have nice things.

Since Official Camp Lana del Rey is saying that yes, this is a video where Lana has a girlfriend, played by Jaime King, and they kill themselves, I’m trying really, really hard to see the homo here. I guess we are supposed to infer that smoke machines + gazing at each other and crying = lesbianism? Spoiler alert: there is no gay lady kissing, sorry. There is very brief blink-and-you’ll-miss-it hugging. Why are they killing themselves? Beats me. 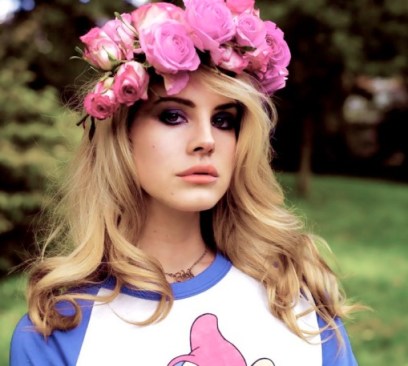 LDR’s songs usually play on a few key themes: Nabokov’s Lolita and nascent sexuality, nostalgia and Americana, and the construction of girlhood/femininity. These all wrap up into the very artificial and very manufactured version of Lana del Rey that we see in her music, her style, her videos, etc. There is almost nothing real about her as a person, which is part of the reason she is at once fascinating and repulsive to most critics. And it’s very important that we acknowledge she is a symbol rather than a musician when thinking about the themes she uses in her videos. In “National Anthem,” she was simultaneously Jackie Kennedy and Marilyn Monroe, the penultimate women of Americana, two sides of the same coin. (The Playtex bra ads on Mad Men, anyone?) In “Born To Die,” she’s stripped nude before the American flag. She’s also in a massive church, crowned like the Virgin Mary and sitting on a throne where the altar should be. She wears a lot of white in all of her videos, which I’ve always interpreted as a nod to innocence.

It turns out that the latest video is an almost literal representation of the lyrics, with the narrator driving with her lover by her “heavenly side” and then “dying happy”. In “Summertime Sadness,” Lana stretches her arms out only moments after we’ve seen a statue of Jesus crucified in the same position, and then jumps to her death. Jaime similarly throws herself from a bridge, and in between these scenes are flashes of scratchy home videos where they cuddle, make faces, and smile into the camera. These are interspersed with the warm-hued smoke machine scenes, which mostly feature them on their own, looking angsty as fog rolls around them. When Lana appears in the car with Jaime, it seems to be after she’s already committed suicide, haunting her lover (or maybe their love exists in a queer temporality? let’s get busy digging into this, english majors!). Is Jaime killing herself because she cannot bear to live without Lana? Did Lana kill herself because she ran out of hairspray? To answer these questions, I could write about ten more pages and then hand it in for credit in one of my queer theory classes, but I suggest you watch it for yourself.