Kiersey Clemons’ star is on the rise, and she’s bringing all of herself along for the ride.

A young biracial black woman who’s upfront and matter-of-fact about her queerness, with a smile that cameras eat up and an infectious laugh – nabbing Vogue features, Coachella Instagram photos, red carpet walks; scoring superhero franchise movies (she’s going to be Iris West in the upcoming Flash stand alone feature!), parts in buzzy Netflix shows (she’s Chase in Joe Swanberg’s Easy), and doing press tours at Sundance. Those are the building blocks of a hot, young career for almost any Hollywood actress. As Kiersey’s sails through those milestones, it’s refreshing. She’s refreshing. An out queer black femme who’s somehow also an old school Hollywood starlet, all rolled into one. 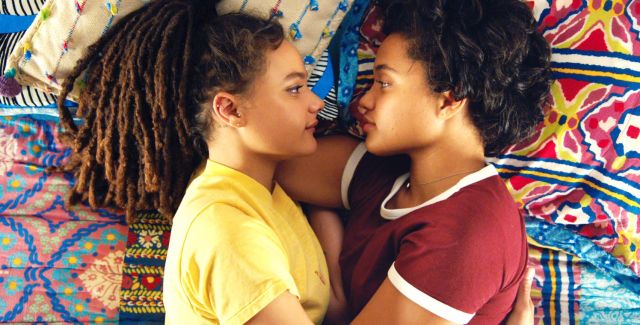 Clemons brought all her talents and charm to bear on the new indie film Hearts Beat Loud, which just opened nationwide. In it Kiersey plays Sam, a teenager spending her last summer at home before college. She has a loving dad in Frank (Nick Offerman) and a young sweet lesbian summer romance with Rose (queer biracial actress Sasha Lane). Rose and Sam are going to be the your new favorite summer romance; I’m willing to bet on it. I reviewed Hearts Beat Loud for us last week, it’s sweet and funny and chopped full of love. A lot of that love comes from Kiersey. She finds Sam’s purity of heart and effortless cool. She holds on tight and never lets go.

Kiersey hopped on the phone with us to talk about the movie, building her career, unicorns, and a whole lot more! (Also, we laughed. We laughed a lot. I told you – it was infectious.)

Carmen: Having watched Hearts Beat Loud, I was immediately drawn to the young love story between Sam and Rose. I think our readers will be, too!

You and Sasha Lane perfectly capture a mutually supportive, sweetness between your characters. We don’t often see that in lesbians on screen — particularly for women of color. How were you and Sasha able to develop that relationship? How was it to play out those relationship dynamics together?

Kiersey: Well, Brett Haley, our director, and Mark Ash, our writer, were very collaborative with Sasha and I. We all sat down and we talked about what we felt, what we wanted to change or add, and how we felt those scenes would go. We talked about our own personal experiences.

Can I be honest? The whole movie was kind of structured, and we mostly stuck to script — EXCEPT for my parts with Sasha. We really wanted to just go with it, and play with it. We wanted to figure out what felt right, you know? And our writer and director… being these white, middle aged, cis straight men [chuckles]… they really wanted to lean in to us. They wanted to make sure it felt as relatable and honest to us as possible.

Sasha and I wanted to bring something to the screen that we wanted to see. Our characters are two girls like us. We asked ourselves, what are we not seeing? What’s lacking in cinema? I’m really proud of how it turned out. It’s just really beautiful. And it feels so good. It feels so different from anything that we’ve seen. And, I love that they [Sam and Rose] are so young. I was so happy to show young lesbians. We’re so used to sexualizing young people on screen. It’s sometimes feels like filmmakers don’t know how to shoot anything else. Or maybe they’re afraid that people won’t want to see it. Either way, it becomes that if they’re young, then they have to be sexualized. I’m happy that we got the chance to keep this real.

Carmen: It’s great to hear you talk about your opportunity to explore with Sasha on set. You’ve already had a variety of memorable roles in your career. As an out actress, you’ve been lucky enough to play three different black lesbian or queer characters; Diggy in Dope, Chase in Easy, and now Sam in Hearts Beat Loud. That’s just… really, it’s unheard of!

It’s important that actors have the opportunity to play lots of roles and not be typecast, obviously. At the same time however, when the universe aligns so that an out queer women of color actually gets to play one on screen, it can feel like a unicorn is getting its wings.

Carmen: Have those opportunities helped you grow?

Kiersey: Hmmm… you know… I think right now is the most exciting time to be a person who looks like me and loves the way that I do. I’ve been given so many opportunities to tell stories that are relatable to my own life, because there are people out there who are finally getting the opportunity to tell real stories. Stories that are honest and are a reflection of the world that we live in.

And so, it makes sense to me that I would be “getting my wings” right now!

Both: [Fall out laughing together]

Kiersey: It’s just… it’s our time! And I know it’s still rare. I recognize that I am so lucky that I’ve gotten to do it so many times. I can only hope that the pool of movies with queer characters, and queer people of color, keeps growing. I hope that there are more of those movies. I want more of us out there, sharing those roles.

Carmen: And I think that one of the reasons you’ve become so memorable is that you find the specificity in each of those characters. It’s never, “Oh let’s go get Kiersey because plays this broad stereotype of gay really well.” They’re always full fledged, independent, different people with their own life circumstances.

Okay. Going back to Hearts Beat Loud — I had NO IDEA you could sing! You do your own vocals for the movie. You’ve got real pipes, girl! Where have you been keeping this secret talent hidden? Did you do any special preparation for the singing in this film?

Kiersey: Thank you! I did work on the songs with my vocal coach. Her name is Sarah Lee. She’s also queer. And she’s Jewish. And she’s a bad bitch. So, yes! [Laughs] I know the outlet I’m talking to! Let’s all hold Sarah up in the light! I’ve been working with Sarah for a few years. And when this project came my way — the genre from Hearts Beat Loud is just so different from what I’m used to singing. It’s not one that I naturally lean into necessarily. In the beginning, I was a little intimidated. I sat down with Sarah, and she really helped me break it down.

Then I met up with Keegan DeWitt, who wrote and composed all the movie’s songs, and Jeremy Bullock, who helped me with my keyboard and my sampler. They were both so encouraging and had such patience.

Carmen: We should definitely talk about Sam and her relationship with her dad, Frank. It’s still a rare joy to see mixed race families on film. On top of that, stories about young lesbians coming of age are usually focused on family strife. Hearts Beat Loud sidesteps those tropes.

Carmen: It felt like you were able to establish a bond with Nick Offerman on set and clearly telegraph it to the audience. Were there any tricks to building your little on screen family?

Kiersey: Yeah! I mean the first day we met was actually our first rehearsal with the music team. So, we were picking up these instruments that we could play on some level, but weren’t necessarily professional or fluid in. That broke down any barrier of pride or uncomfortability between us. We had to be vulnerable and make embarrassing mistakes in front of each other. That brought us together. We had something to immediately bond over.

Carmen: We recently covered your Met Gala red carpet look for the website. You’re everywhere lately and we’re definitely happy to be charting your growth. It’s a lot of fun to watch your meteoric rise as an young, out black woman. There was quite literally NOTHING like this when I was coming up. So, I want to ask you a classic ‘90s Teen Beat style question: If you had something you could say to your LGBT fans, what would it be?

Carmen: Don’t feel any pressure! You can literally just say, “Hey, what’s up! I see y’all in my mentions! I see y’all on Instagram!”

Kiersey: [Still laughing] But, that’s true though!! Like I don’t usually respond to my Instagram DMs or whatever, but when it’s a gay black woman going, “Hey girl! I see you!” I always feel a little at home. I feel like, “Oh you won’t harass me or stalk me and kill me in my sleep. We’re family.” It’s community vibes.

I love the community vibes.

Carmen: Yes! We’re out here, loving each other! To quote the incomparable Issa Rae, “I’m rooting for everybody black!”

Carmen: Me too! And since no one’s kicked me off the phone yet, here’s one last fun question: It might surprise some of our readers that you got your start doing Disney Channel. Do you have a favorite DCOM (Disney Channel Original Movie) from when you were kid? What’s the one childhood movie you could watch over and over and never get tired of?

Both: [Fall out laughing]

Hearts Beat Loud is now open nationwide, you can check here for local showings and premiere dates. If you haven’t already, you can follow Kiersey on Instagram or Twitter as she continues her Hollywood take over.

Carmen has written 534 articles for us.