Democrat Kate Brown is now sitting Governor of Oregon, following the “bizarre and unprecedented” resignation of elected Governor John Kitzhaber over an ethics scandal. Brown was sworn in on February 18, and is the first openly bisexual person to serve at such a high level of political office in the United States.

Governor Brown is a 24-year-veteran of the state Legislature and secretary of state’s office, most recently serving six years as Secretary of State. In Oregon, the Secretary of State is lieutenant governor, handling audits, elections, archives, and business registrations. Brown’s status as sitting governor will go before voters in a special election next year. If she wins, she will serve the remaining two years of Kitzhaber’s term, and could run for a full four-year term in 2018. 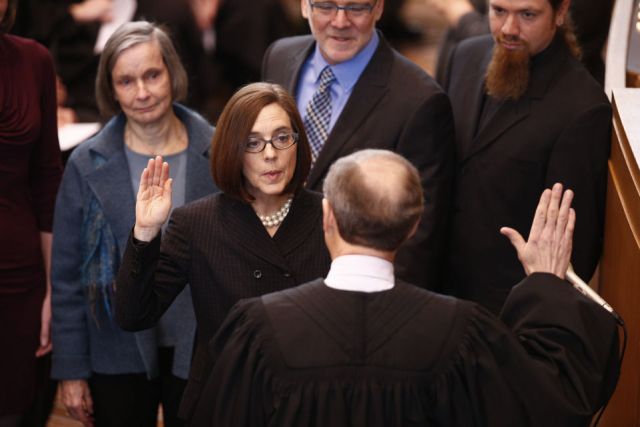 Chief Justice Thomas Balmer administers the oath of office to Secretary of State Kate Brown in the House chamber of the Oregon Capitol on Feb. 18, 2015. Brown becomes the state’s 38th governor, succeeding John Kitzhaber, who resigned amid an ethics scandal. Bruce Ely/Staff. Via OregonLive.com.

Brown — who was born in Spain but raised in Minnesota — first moved to Oregon to study law at Lewis & Clark College in Portland. After earning her JD in 1985, she stayed in the area to practice family law for several years, eventually taking a job in 1991 as an advocate for women in the Oregon legislature. When Brown began dating a woman, she hid it from her colleagues in fear.

“I was walking on eggshells the whole time,” Brown said of the experience in Breaking Through, a documentary about LGBT politicians. “Like I couldn’t be who I am — I’m not free to be myself. It feels like you’re cutting off your legs or your arms. It feels like you can’t be a whole person.”

When an Oregon newspaper called one night and announced that they would be outing her in their newspaper the following day, Brown was forced to go public with her sexuality. In Out and Elected in the USA: 1974-2004, an exhibit by Ron Schlittler, Brown described the reception: rejection by gay friends who called her “half-queer,” inappropriate sexual advances by legislative colleagues, and being told by her parents, “It would be much easier for us if you were a lesbian.” 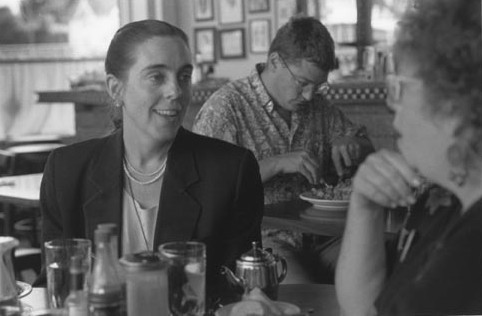 In spite of this, Brown remained in the House, helping to pass the legislation that made Oregon one of the first states to enact family medical leave. In 1997, she ran for a seat in the Oregon state Senate, narrowly defeating a three term incumbent who outspent her two to one. Brown believes support from the LGBT community was a major factor in her win.

As a legislator, Brown was the chief sponsor of the state’s first domestic partnership legislation, and successfully blocked anti-gay ballot measures across the state. In 2008, Brown became the first woman to serve as Oregon Senate majority leader, and later that year she was elected secretary of state.

Although Brown has said little so far on her plans as governor, a look at her campaign contributors and political background suggest a slightly more progressive outlook than her (also Democratic) predecessor. Issues such as education funding, timber policy, tort reform and campaign finance limits are all on the table. Many will also be watching to see what, if anything, she does to address recent allegations of an overly cozy relationship with Comcast. 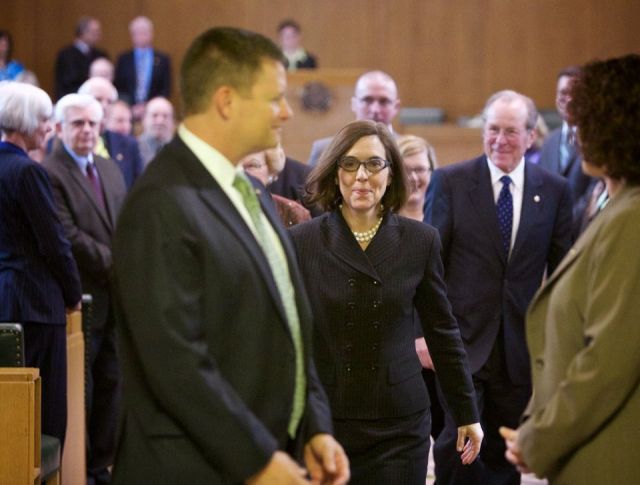 Regardless of what the future holds, many view Brown’s nationally commented-on appointment as a major win for bisexual visibility. Although gay and lesbian politicans have been making rapid gains in numbers, the number of nationally out bisexual politicians can be counted on one hand. (Two, if retirees are included.) Aside from Brown, they are:

Brown lives with her husband Dan Little in southeast Portland, where Brown is an active member in the LGBT community and an encouraging role model for youth.

In order to make sure that the comments section on this article is a healthy and welcoming place for our bisexual readers, please note that any comments that question the validity of bisexuality or sexual fluidity as a sexual orientation, question Autostraddle’s decision to publish pieces discussing bisexuality, or make essentialist claims about bisexual people (ex. bisexuals are cheaters, bisexuals turn out to be gay) will be swiftly deleted.