The 2012 election was a historic one when it comes to greater diversity in government. We saw the election of Tammy Baldwin, our first openly gay Senator; Kyrsten Sinema, our first out  bisexual Congresswoman; Tammy Duckworth, our first disabled Congresswoman and also an Iraq War vet; and Mazie Hirono, the first Asian-American woman and Buddhist in the Senate, among many, many others. And for most progressive Americans, these women’s victories were both a strong rebuttal to the War on Women and a huge step forward for equality. But at least one person doesn’t know what to make of these women. Or at least, he doesn’t know what to make of one of them.

That person is Manuel Roig-Franzia, and that’s the best impression one can make of his profile of Rep. Sinema (D-AZ) in The Washington Post last Wednesday – which is alternately offensive, patronizing, and just plain confusing. It’s hard to tell whether Roig-Franzia’s piece is more offensive to women or to bisexuals, but certainly, it’s offensive to all people who want to believe we made progress this November. The fact that these pieces still get published show just how far we have to come.

Roig-Franzia is a reporter for WaPo’s Style section; his site bio reads that “[h]is long-form articles span a broad range of subjects, including politics, power and the culture of Washington, as well as profiling major political figures and authors… He’s covered U.S. and international presidential campaigns, the January 2010 Haiti earthquake and more than a dozen major hurricanes, including Katrina.” So why does someone who is comfortable with such a wide range of topics seem so puzzled by how to approach America’s first bi Congresswoman? And boy, is he ever fixated on her bisexuality. 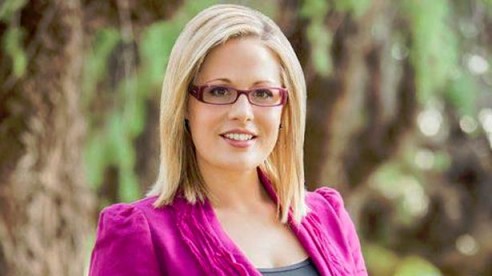 The topic comes up in the very first line, with “Something is bugging Kyrsten Sinema.” That thing, of course, turns out to be her sexual orientation – or rather, how people like Roig-Franzia want to keep focusing on it when she’d prefer to tell reporters about her policies and personal journey. He begins by talking about fun-loving and joking she is – almost to the point of trying to suggest she isn’t serious enough with something about how her “aspirationally comedic” tendency is “always getting her into trouble” – before casting her as a vicious harpy for not wanting to talk about her orientation all the time:

And when Sinema is bothered, she isn’t that fun-loving, self-deprecating, laugh riot with the quirky ways. She can turn lecturing, hectoring, defensive, accusatory, pouty and curiously repetitive. Even a softball question about how her sexual orientation has informed her thinking about public policy — she was, after all, the architect of a successful campaign to block a same-sex marriage ban in Arizona — peeves her. “I don’t have a story to tell,” she snaps. “I don’t think this is relevant or significant. I’m confused when these questions come up.”

“Hectoring, “accusatory,” “pouty,” “snaps,” …where have I heard these words before? Oh right, it’s what happens pretty much every time women, queer people or people of color get justifiably mad about oppression – they’re pegged as “hostile” by a privileged person, who clearly knows better what the real issues are. If you didn’t get that message clearly from his description of Sinema as unreasonably furious, there’s the dismissal of her concern by calling the question that bothered her “a softball question”; earlier in the paragraph, Roig-Franzia describes her upset about the worldwide media “distill[ing] her to a single distinguishing characteristic based on her sexual orientation” as just “a real bummer.” The next page continues it with more condescending jabs, offering repetitive quotes with an “Uh-uh,” “Okay. Got it.” and “Ten-four,” as though Sinema is a blathering small child who the grown-ups are trying to shush. He then outright states that Sinema is the one making her sexuality a big deal.

Roig-Franzia makes it clear that he thinks it’s good that “gay men and lesbians” are getting elected to office – and also no big deal, describing the reaction to that of “trending from ‘oh, wow’ to almost ho-hum.” So why then must Sinema’s orientation be given top billing in every article about her? It’s like Roig-Franzia is trying to achieve the space on the Biphobic Bingo Card that says “I can handle gay people, but bisexuals are just freaky.”

Weirdly, Roig-Franzia suggests she is somehow hypocritical for taking campaign money and support from LGBT rights groups if she doesn’t mention being bi constantly. It doesn’t mean you’re not proud of an identity just because you don’t want to be reduced to it. There is nothing “progressive” about treating someone like a token (which is why this is more of a Republican tactic these days). 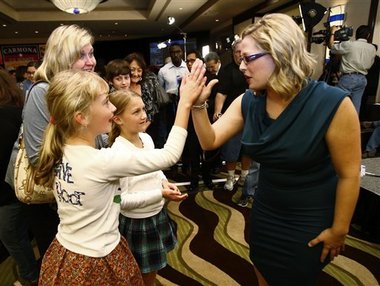 And all that is just the first page and a half or so. Like most introductions, it sets the tone for the whole piece, but probably not in the way that Roig-Franzia intends. The rest of his article gives the impression that Sinema isn’t as smart or serious as she thinks she is, and Roig-Franzia has a better idea of what is and is not important with respect to her identity and career. All of that is, unfortunately, fairly common when it comes to reporting by sexist men on accomplished women. But Roig-Franzia’s actual intentions may be just as troubling, except with result to her sexual orientation rather than her gender. It’s that she’s a woman of contradictions. Or, in other words, a “flip-flopper.”

It’s a common insult in politics – we saw it a lot this election season with Mitt Romney, and in 2004 with John Kerry – but it takes on a particularly troubling tinge when applied to a bisexual person. When biphobes aren’t trying to suggest that bisexual people are actually gay or straight, one of the most common stereotypes is to suggest that they’re significantly more indecisive, unfaithful or mutable than the norm. Even the most monogamous bisexual has likely had to deal with a partner assuming he or she is destined to cheat on them. But rarely does one hear that that wobbliness applies to every aspect of our lives, even things well outside the sexual realm.

That seems to be what Roig-Franzia thinks, though. By dwelling on the ways in which she’s changed over the years only after he’s made it clear he sees her as bisexual first and foremost, Roig-Franzia seems to suggest that Sinema’s sexuality makes her a fence-sitter in every area of her life. Amy S. Choi of Feministing points this out in her analysis of the piece:

Roig-Franzia’s lengthy piece in the Post’s Style section is devoted to painting Sinema as a hypocritical flip-flopper in other ways — and devoted to demonstrating his own views of bisexuality. Sinema, he poses, is impossible to nail down as one thing or another. According to him, she went from a Democratic “bomb-thrower” to angering progressives by being too friendly with conservatives. She helped defeat the same-sex marriage ban in Arizona, but only by betraying the gay rights movement. She focuses on family values and economic empowerment but hates stay-at-home moms. She grew up poor but now loves Prada. She attended Brigham Young University on scholarship but then left the LDS church. She is fun-loving and quirky, except when she’s a shrew.

But how much are some of these really examples of “flip-flopping”? Sinema’s change in demeanor in her career as an Arizona state legislator sounds like a natural progression for an idealistic person when they first enter office: coming in with all guns blazing until they realize, hey, I actually have to work with these people. And Sinema’s supposedly treacherous approach in her 2006 campaign against a statewide gay marriage ban – the first successful effort in the country? It was arguing that the proposition “would hurt unmarried heterosexual couples because it would prevent them from participating in medical decisions for their partners.” One person’s “betrayal” here is another’s pragmatism – if Sinema had focused only on the effects on same-sex couples, she may not have won. (And it generally doesn’t make sense for gay rights groups to chastise a bisexual politician for not being committed enough to the issue over this, considering how often they give the benefit of the doubt to straight Democrats who are opposed to or neutral on marriage equality.)

What’s particular odd, though, is the way Roig-Franzia makes her conversion from Mormon to non-religious out to be a form of “flip-flopping” – like questioning and later rejecting parents’ religious beliefs isn’t something that young adults of all sexual orientations have done for years, for reasons that often had nothing to do with politics or sexual orientation (although it seems particularly unsurprising that a queer person would have found distance from the LDS church, and in fact makes a lot of sense given Sinema’s identity). And then he mentions how “somewhere along the way… Sinema came to identify as bisexual,” as though it was a choice she made on a general tack to the left. Even her sexual orientation, the thing that makes her so flip-floppy in the first place, must itself be a flip-flop! 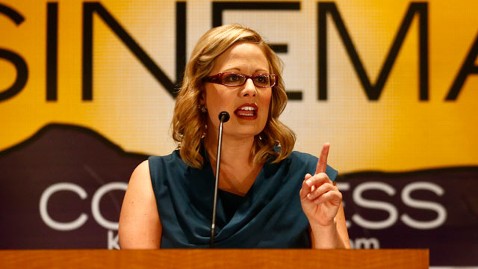 Roig-Franzia is grasping at straws in order to make Sinema out to be a bisexual stereotype, turning the natural changes that most people go through during their lives/careers into “flip-flops.” With the exception of her obvious joke about being a “Prada socialist,” nothing the article describes about Sinema seems particularly contradictory.

What’s perhaps even more regrettable than all the misogyny and biphobia in the article is the fact that Sinema does have, as the headline puts it, “a success story like nobody else’s” – but Roig-Franzia isn’t telling that story. There is a more interesting narrative that someone could detail with Sinema: how one goes from a devout Mormon family and a Brigham Young student, to a pro-choice Democratic politician who is open about her bisexuality and lack of religious belief. (Roig-Franzia touches on her upbringing, but never goes into the story behind her change of heart, or how that upbringing impacts who she is today.) Or how Sinema’s success in the land of Jan Brewer and AZ SB 1070 shows that Arizona’s political landscape is perhaps more complicated than the media makes it out to be.

Or why not just talk about how she won such a close election? Clearly, Sinema’s constituents saw something more in her than just a historic demographic choice, or she wouldn’t have won. What does that say about Roig-Franzia that he refuses to see anything else?