With the Iowa caucus and Michele Bachmann in the rearview mirror and New Hampshire’s primary looming, Republican contenders are pulling out all the stops to try to make waves on January 10th. Even Fred Karger who, politely speaking, has about as much of a chance of winning as I do, is beefing up his campaign. Karger released a new TV ad campaign where he offers up himself as an alternative for those voters fed up with the other Republican candidates. Challenging voters to “send the Republican party a message,” Karger frames himself as the Republican protest vote. Now, I’ve lived in New England my entire life and if there’s one thing I’ve learned, it’s that New Englanders love a good protest.

Karger will appear on the New Hampshire primary ballot with some 30 other Republican candidates, but it’s still questionable whether anyone will vote for him. Karger seems to have received fewer votes in the Iowa caucus than Buddy Roemer or Herman Cain, who you may remember is not actually running, putting him at best in the 20s. Still, a caucus just isn’t the same as a primary, and New Hampshire is a very different demographic from Iowa. Karger could have a much different showing in a primary that doesn’t take all day, and is in the second least religious state in the country. 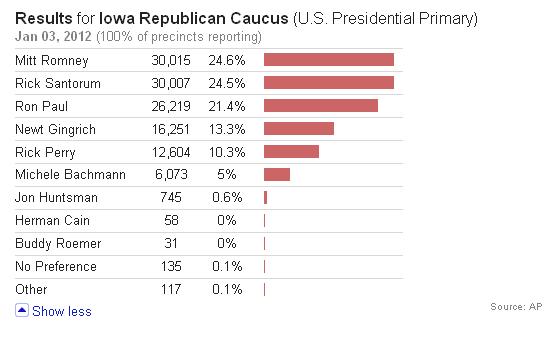 IOWA CAUCUS RESULTS FROM THE AP

But here’s my question: assuming that some independent voters are dissatisfied with the Republican party, will they really go out to vote in protest at the primary? I’m inclined to think jaded voters would just stay home and decide to pick from the nominees later. This sort of dissatisfaction seems like it will probably manifest itself stronger in the general election.

For the sake of argument, let’s imagine Karger successfully becomes a protest vote. As the least conservative candidate I have to imagine that he would draw votes away from Mitt Romney. This would theoretically suit Karger, as he has been notoriously anti-Romney throughout the campaign. Karger also has a shot of snagging votes from those who might have voted for Ron Paul but are thrown off by the recent controversy around the New Republic’s homophobic and racist newsletters from the 90s.. But then what? Santorum takes the lead in the primary? That doesn’t seem to benefit anyone with even remotely gay equality oriented goals.

These days whenever someone in the US thinks about this sort of spoiler effect, Ralph Nader comes to mind, but this is a different situation. It’s not as though Karger is siphoning votes from the Republican party in the general election. In fact, this specifically won’t happen as, back in 2010, Karger said he would not run as an independent ticket in the general election. Thus, perhaps more moderate republicans who would have voted for Romney in the primary will vote for Karger, but if neither of them are in the general election will end up voting for Obama in lieu of a more conservative GOP nominee. Thus, without actually being in the general election (and possibly taking votes away from Obama) Karger might actually end up swinging the election in favor of the Democrats. Or maybe Santorum will end up president. Or maybe no one votes for Karger and Romney wins. It’s ridiculous to pretending these are more than just theoretical scenarios. I guess we just have to hope for the best. In the meantime, I hope Karger sticks it out as long as he’s been claiming he will, and ends up the first openly gay candidate in a mainstream new debate. It would be at least one good thing to happen in this crazy ride we call life and/or the race to se