One of the most compelling and heartbreaking stories of 2011 was that of Bradford Wells and Anthony John Makk, a binational gay couple in San Francisco who faced deportation because their union isn’t legally recognized, even though Bradford suffers from AIDS and Makk is his primary (and only) caregiver. Despite heartfelt pleas to the Obama administration, as of August (and three days before Makk’s assigned deportation date) it looked like the couple would be separated by an ocean and a law that wouldn’t apply to them if they could have a legal marriage recognized by the US government. 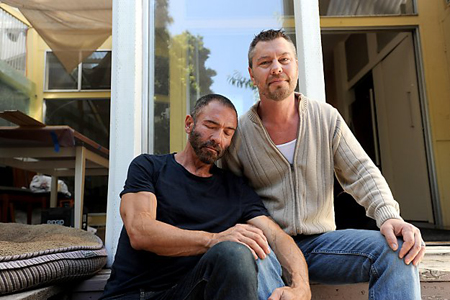 Now, Makk has won a two-year stay of deportation, which will allow him to stay in the States and care for his ill partner for at least the foreseeable future, at the end of which the landscape of rights for gay couples will be anybody’s guess. They credit their victory to their representative, House leader Nancy Pelosi, as well as Senator Dianne Feinstein and Senator Mark Leno.

Technically, what Makk has been granted is “deferred action,” which means that while Makk’s status in the eyes of the law hasn’t actually changed, Citizen and Immigration services is willing to perform “an exercise of prosecutorial discretion” and make an exception for him (for two years, at least). Unlike the case of Monica Alcota and Cristina Ojeda, whose deportation case was actually closed last month, there isn’t a guarantee of continued residency for Makk. He has no way of knowing, really, if the same thing will happen again in two years. But as DOMA continues its slow decline into oblivion, it’s also entirely possible that Makk and Wells (as well as Alcota and Ojeda) can qualify for the same legal status as the straight international spouse of a US citizen.

Right now, as miraculous as both couples’ near-misses with deportation have been, neither Makk nor Alcota have a “path to citizenship.” Although Alcota did in fact apply for a green card, she isn’t eligible for one as long as DOMA remains in effect, and technically her stay of deportation may not be permanent either. She’s able to stay here under the US government’s new policy of prioritizing more urgent deportation cases like those of convicted felons, and “which allows some law-abiding undocumented immigrants with close ties to the U.S. to stay here temporarily.” Both couples can now enjoy some level of security, but still have to contend with the level of uncertainty that every gay couple in America faces, which is that ultimately it’s mostly up to the whim of the government whether they decide to treat our families as real or not. But for Makk and Alcota, and their spouses, it’s a blessing just to be able to be in the same uncertain boat as the rest of us, and with the person they love.