After a robbery early in the morning on December 4th, police responded to find 21-year-old trans woman Deshawnda Sanchez wounded from a gunshot that would kill her at the scene. It is not only absolutely heartbreaking, but also incredibly infuriating that another trans woman of color has been brutally murdered like this. It especially stings coming just two weeks after Transgender Day of Remembrance. Sanchez’s murder brings the rate of trans women’s murders in the United States up to one every month in the past year. 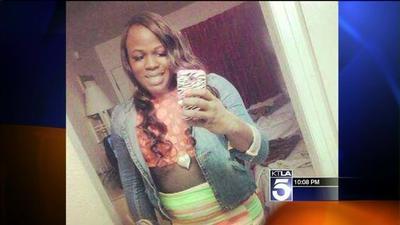 Sanchez was running away from her murderer and even made it to someone’s doorstep, pounding on their door for help before she was murdered. When the person living in the home heard gunshots, they came to front door only to find Sanchez there. Christopher Argyros, the manager of the anti-violence project at the Los Angeles LGBT Center said that Sanchez’s murder is just an example of a wider problem and that “it really demonstrates that transgender women’s lives aren’t valued our communities. That obviously needs to change.”

The official Transgender Day of Remembrance website lists over 80 trans people who were murdered in the year, nearly all of them trans women of color. In the United States alone, Sanchez marks the twelfth trans woman killed since one year ago, on December 4th 2013 when Betty Skinner was murdered. The other American trans women murdered in the past year are Brittany Stergis, Kandy Hall, Mia Henderson, Alejandra Leos, Aniya Parker, Zoraida “Ale” Reyes, Yaz’min Shancez, Tiffany Edwards, Ashley Sherman and Gizzy Fowler.

In Southern California alone, Reyes, who was a transgender activist, and Parker’s murders make this the third murder of a trans woman of color in the last six months. And it’s no coincidence that nearly all of these women are trans women of color, many of them black. As we’ve seen recently (and all throughout our lives, to be perfectly honest), black lives are not valued very much in America. When you live at the intersection of being transgender, a woman and a person of color, you are especially likely to be targeted for violent attacks or discrimination. This is even more true for black trans women. 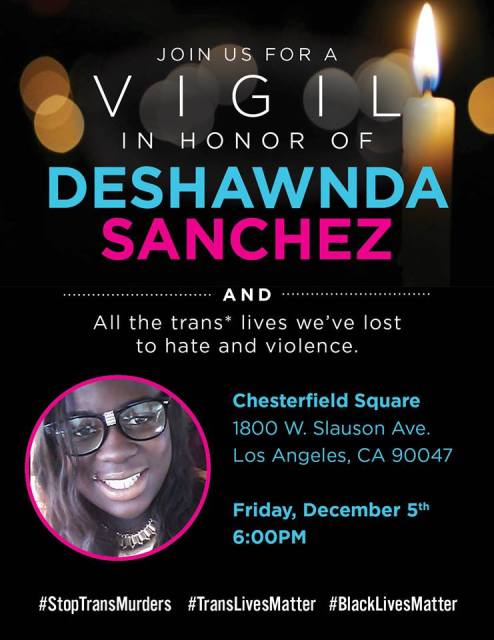 There will be a Vigil and Rally in Honor of Deshawnda Sanchez today, Friday, December 5th, at 6 pm PST. People are invited to show their love and support for Sanchez and to show people that her life was valued. People will meet at the Chesterfield Square parking lot at 1800 W Slauson Ave. Los Angeles, CA. From there they will walk to where she was murdered to remember her.

Police are looking for the gunman and have not ruled out the possibility of a hate crime. If anyone has information, they are asked to call the LAPD’s Criminal Gang Homicide Division at 213-485-4341