JENNIFER BEALS: We were strolling through the checkout aisle at Walbaum’s when we spotted, buried beneath Drop 12 Pounds Every Week, a curious kitten wondering if we are getting the SUPPORT WE DESERVE, a one-pot Winter Tiredness Cure, some new Health Discoveries, how to end carb cravings and achieve Instant Bliss — the dear, eternally lovely Jennifer Beals. Magazines like First don’t do their own photoshoots, so instead they used a classic J-Beals photo that could’ve been taken any time between 1999 and yesterday. In fact, they liked it so much, it seemed to us that they used it twice!

However, we were wrong. It was not the same photo. Clearly they ripped this shit off Photohunt: 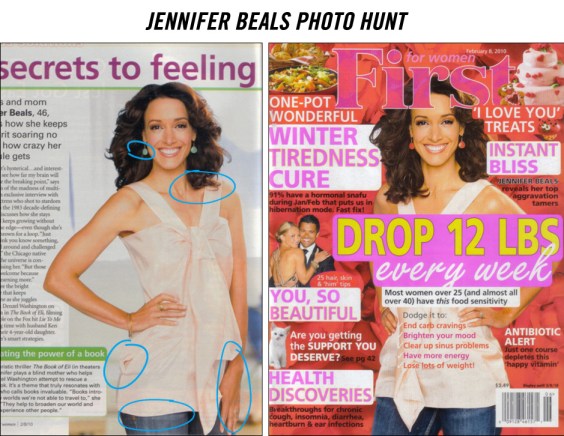 Jennifer Beals was also featured in natural-living publication Viva Magazine, sharing more of her secrets of perfection. The intro is a bit odd:

Long before Jennifer Beals was crowned the unofficial spokeswoman for same-sex partners by starring as Bette Porter on The L Word, a Showtime drama about lesbians and their relationship woes, before graduating from Yale with an honours graduate degree in American Literature and before becoming mom to her four-year old daughter, came a small 1983 movie about a small-town dancer you might have heard of — Flashdance.

And from there on out, Beals essentially continues to encourage speculation: is she a real person, or a Supreme Being created by some higher power to bless the human race? Evidence that Jennifer Beals has special magical powers:

1. “I found if I can give birth without any drugs, I could get through a triathlon.”
2. She travels with a brown bag that she received from her acupuncturist, where she keeps magical holistic tea which “helps maintain a balance in the body so it can heal itself.”
3. Her dermatologist wanted to remove a potentially cancerous mole but Beals was shooting that week, so instead she just cured it by taking vitamins.
4. Her family doctors are TCM practitioners and homeopaths.
5. She meditates regularly.
6. She fixed her energy-zapping Epstein Bar disease by cutting sugar, wheat and caffeine from her diet.
7. She eats only organic foods, and teaches her daughter “eco-friendly” living. In fact she recycles SO MUCH that she worries her neighbors must think they never “keep anything.”

You know how sometimes we rant about how the casual popping of pharmaceuticals, general overmedicating of our everyday lives, copious alcohol consumption and other coping mechanisms of modern life wouldn’t seem so necessary if we all had the time & money & support to truly take care of our bodies, get sleep & excercise, eat healthy foods, read books, get lots of fresh air and do work that we love? Jennifer Beals is proof.

THE REAL L WORD: Someone we know was at a hot sceney WeHo restaurant with someone else we know and so was the cast of The Real L Word and they asked the people we know if they could film them and the people we know said “Hell to the No” because they didn’t want to “support IFC,” which is amazing. OH REALITY! (@peopleweknow)

SUNDANCE: The Kids Are Alright is getting a bunch of buzz out of Sundance this week. Annette Bening and Julianne Moore play a lesbian couple in the film, which is mostly about their kids’s reconnection with their biological father (Mark Ruffalo). The movie is from Lisa Cholodenko, who also brought us Laurel Canyon and High Art (!!!). Here’s a bit more about the couple:

There’s apparently a bidding war going on for the distribution rights to this sucker. So you might actually get to see this in a real theater instead of waiting for it to come out on DVD so you can buy it from Wolfe Video like every other lesbian movie ever! (If it’s good you should buy it from Wolfe anyway.) (@latimes)

NOT SUNDANCE, BUT SIMILAR: In other film festival news, ” Charlotte’s Gay and Lesbian Community Center was so pleased with the turnout for last April’s Gay Charlotte Film Festival that it didn’t wait a full year to have another one.“ All these films have been made, and we knew nothing of it, like the Robert Pattinson – Javier Beltrán film abotu Fredrico Garcia Lorca (“Little Ashes”) and a romantic comedy called Drool starring Laura Harring (“Mulholland Drive”) and Jill Marie Jones.

BRING IT ON: Bring it On: How a sleeper hit about cheerleading became a direct-to-DVD franchise. Remember how perfect it was when Eliza Dushku walked into the gym for cheer tryouts and went off on Kirsten Dunst? Is there a point in watching a cheerleading movie without either of them?

Fun fact!: this article about Bring it On is written by Marisa Meltzer, who also wrote How Sassy Changed My Life: A Love Letter to the Greatest Teen Magazine of All Time, which is more or less the bible on which Autostraddle was built. (@slate)

MADONNA: Madonna, a Gospel Choir & The Gays: “Somebody should have told Madge she’d never be able to compete with the stage presence of black church queens. Watch the kids church clap all over Madonna beginning at the 0:16 mark.” (@livingoutloud)

INDIE: Is Indie Dead?: It stands among the most important, potentially sustainable and meaningful movements in American popular culture—not just music, but for the whole cultural landscape. But because it was originally sculpted more in terms of what it opposed than what it stood for, the only universally held truth about “indie” is that nobody agrees on what it means. (@pastemagazine)

THE QUEEN: Queen Latifah told The Today Show last Thursday that she wants to “just go down [to Haiti] and get some of those babies. If you got a hook up, please get me a couple of Haitian kids. It’s time. I’m ready. I got two arms, I can handle at least two. I can take a third in a backpack, and one in the front, we could just wrap it in some swaddling cloth … give me four.” Props for using “swaddling cloth” in conversation, best term ever. (@nydailynews)

PASH: Olivia Newton John’s daughter has been caught at clubs (gasp!) kissing girls! Err, while falling down drunk! Does that count? The Herald-Sun called it “another blow to her long-suffering mother.” Ouch! How cute is the word pash, though? (@defamer)