So, it’s the day we’ve all been waiting for, the day I’ve been anticipating since this fANDROID first saw the trailer for Dirty Computer during a screening of Black Panther — the new Janelle Monáe album and its accompanying visual component, Dirty Computer, is finally here. And while our intrepid Janelle Monáe beat reporter, Carmen, is hunkered down dissecting Dirty Computer for a full review that’ll run here next week, we couldn’t pass up the opportunity to open the floor up for your immediate reactions to Monáe’s first album in five years. I want to hear all your thoughts and feelings about it.

But first, did you watch the Dirty Computer visual component, which debuted at midnight on BET and this morning on MTV? Was it as spectacular as you hoped?

When Beyoncé released the visual album for her self-titled album back in 2013, she was nostalgic for a time when listening to new music was more than just shuffling through the music on your phone or iPod. She wanted to re-establish the bond — broken by a shift away from videos and an increased focus on singles — between the artist and the fan by inviting them into her head.

“I see music, it’s more than just what I hear,” Beyoncé said. “When I’m connected to something, I immediately see a visual or a series of images that are tied to a feeling or an emotion, a memory from my childhood, thoughts about life, my dreams or my fantasies and they’re all connected to the music.”

As I watched the “emotion picture” that accompanied Dirty Computer‘s release, I thought about the Queen Bey’s words and how much Janelle Monáe was looking to do the same. Monáe has always been an exquisite storyteller, crafting an afrofuturistic world long before any of us knew what Wakanda was, but she’s also willing to live in ambiguity, allowing an android, Cindi Mayweather, to be her stand-in. But this time, there’s no android, only her — the real Janelle Monáe — grappling with what it means to be a black queer woman in today’s world.

“Dirty Computer is a near-future [emotion picture] about a citizen who finds love and danger in a totalitarian society. She’s an outlaw because she’s being herself,” Monáe told Billboard. “Overall, I wanted to reflect what’s happening in the streets right now, and what might happen tomorrow if we don’t band together and fight for love.”

The 44-minute film is part Westworld, part Eternal Sunshine of the Spotless Mind, part The Handmaid’s Tale and part THX 1138. Jane (Monáe) is a dirty computer and is having everything that’s “dirty” about her — all the things the outside world considers “not normal” — stripped away, but she fights the cleansing process, fighting to hold onto the memories of her affair with Zen (Tessa Thompson). 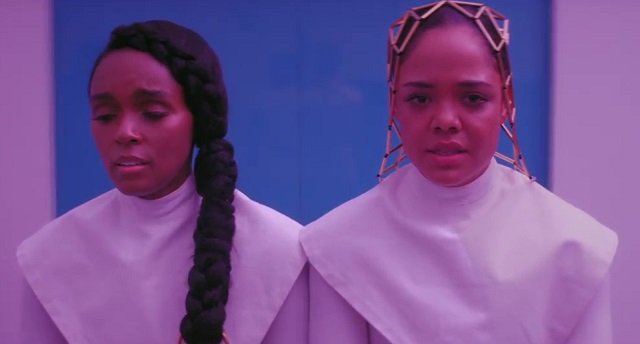 If I wasn’t a Janessa shipper before, I became one, right at this very moment.

“Thinking will only make it harder,” Zen says, urging Jane to accept the cleansing process. “People used to work so hard to be free but we’re lucky here, all we have to do is forget.”

Then, Jane whispers back, “But I don’t want to forget you,” and, as my heart breaks, Zen answers, “You don’t have a choice.”

It’s perhaps fitting, then, that this album and the film that accompanies it, dropped on GLSEN’s annual “Day of Silence,” a day devoted to spreading awareness about the effects of the bullying and harassment of LGBT students. It asks us to be seen, to choose freedom and to accept love in whatever way it comes into your life. 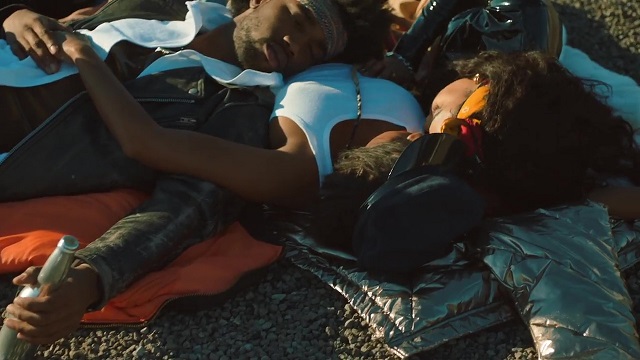 “I want young girls, young boys, non-binary, gay, straight, queer people who are having a hard time dealing with their sexuality, dealing with feeling ostracized or bullied for just being heir unique selves, to know that I see you,” Monáe told Rolling Stone. “This album is for you. Be proud.”

SEE! Janelle Monáe made an album just for me and you, and it’s your solemn duty as a queer woman to go and listen to it right at this very second and share all your thoughts and emotions in the comments. Now, I don’t want to step on Carmen’s toes — again, she’ll have a thorough review of the album for you next week — but I can’t resist sharing a few thoughts on Dirty Computer, the album:

First, I’m not sure how anyone can listen to the closing verses on “Crazy, Classic, Life” or “Screwed” or the entirety of “Django Jane” and not long for a full album of Janelle Monáe rapping. I NEED IT IN MY LIFE, JANELLE!

Second, I’ve been listening to “I Like That” and Drake’s “Nice for What” in tandem, on repeat, since they dropped. I didn’t realize how perfect the pairing was until I read Monáe’s description: “inspired by wack ass fuckboys everywhere (from the traphouse to the White House) who make the lives of little brown girls so damn hard.” Sounds about right…

And lastly, how do we think that Brian Wilson collaboration of the title track happened? Like, how is it possible that those two people ended up in a room and were like “we should definitely work together?” And, also? How did such an unlikely pairing churn out the perfect song?

So, Janelle’s here, she’s queer and she’s got an amazing new album out. Let me know all of your feelings about it.