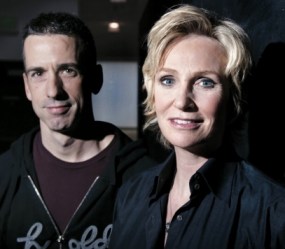 Jane Lynch and Dan Savage share their frustrations regarding the state of the gay union in a refreshingly bullshit-free interview with Newsweek.

Lynch: Yes, we thought the great hope of Obama was going to magically change all that, and it doesn’t seem to have…
Savage: …had the intended effect.
Lynch: He’s just nicely walking the middle.
Savage: And unfortunately, when you split the difference on gay and lesbian people, what you wind up with is no legislative progress. You get a lot of nice speeches, you get invited to cocktail parties, and we have shit to show for it.

On DADT (the interview was conducted before the Senate vote):

Savage: F–k John McCain—put that in NEWSWEEK.
Lynch: Yeah, I say it too, to the second power.

20th Century Fox’s holiday greeting card written by Glee co-creator Ian Brennan (who writes Sue Sylvester’s dialogue), directed by Ryan Murphy and starring The Lynch (and a cameo from Mr. Shoe). Of course her marriage was a publicity stunt and she’s getting the Glee kids sick kittens for Christmas.

Are you a member of the Ani Difranco Appreciation Club? Of course you are. You’ll find this pair of interviews, Ani: Then and Now compelling as they compare her current tastes in music with the Ani of 1995. (@motherjones)

Can’t this kid catch a break? Ugh, and right before Christmas! Lilo is under investigation for “misdemeanor battery” for allegedly attacking a female staffer at the Betty Ford Center. FYI, she’s in there because she failed a drug test after she was freed from jail. People on the inside are saying the argument started after the Betty Ford staffer yelled at LiLo for returning after curfew after hanging out at a bar. (@latimes)

Want a State of the Gaga? It’s coming. BORN THIS WAY IS COMING (in February).