Our team had a pretty good night at last night’s 65th National Book Awards. Winners included out black lesbian Jacqueline Woodson, who took home the prize in Young People’s Literature for Brown Girl Dreaming and thanked her partner Juliette in her acceptance speech; and Ursula LeGuin, who took the stage to accept the Medal for Distinguished Contribution to American Letters.

The decision to honor Woodson was an unanimous one for her story about growing up in the 60s and 70s moving all around the border of north and south as an African American, a girl, a Jehovah’s Witness and other markers of difference. Written in verse, Brown Girl deals with issues usually thought “too intense” for children’s literature such as faith, race, sexual identity, alcoholism and even sexual abuse. It also aims to bring a form of language and storytelling that Woodson thought was previously reserved for old white people. She only discovered and fell in love with verse it after reading Langston Hughes in college. But her young adult fiction brings it to youth much sooner.

“Until then, I thought it was some code that older white people used to speak to each other. I didn’t know what was going on with the line breaks and the words,” Woodson recalls. “Once the floodgates opened, they opened.” 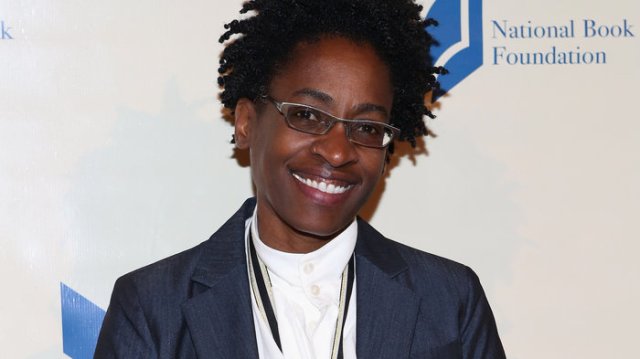 The major downer was racist remarks by host Daniel Handler, better known as Lemony Snicket when he joked about Woodson’s watermelon allergy and never being able to receive a Coretta Scott King Award. But, you know, you can host the book awards…

Lucky for us the ever popular Oregonian science fiction author Ursula K LeGuin brings it back around with her brilliance. While not necessarily queer herself, she has consistently approached gender and sexuality in thoughtful ways throughout her long writing career including the popular Left Hand of Darkness, which chronicles a man’s journey across a glacier with an alien of multiple genders and more explicit thoughts on gender in her 2004 collection The Wave in the Mind: Talks and Essays on the Writer, the Reader, and the Imagination. In portions of Wave where LeGuin is specifically addressing notions of gender and being born “before woman was invented” she has such gems as:

I don’t have a gun and I don’t have even one wife and my sentences tend to go on and on and on, with all this syntax in them. Ernest Hemingway would have died rather than have syntax. Or semicolons. I use a whole lot of half-assed semicolons; there was one of them just now; that was a semicolon after “semicolons,” and another one after “now.”

And another thing. Ernest Hemingway would have died rather than get old. And he did. He shot himself. A short sentence. Anything rather than a long sentence, a life sentence. Death sentences are short and very, very manly. Life sentences aren’t. They go on and on, all full of syntax and qualifying clauses and confusing references and getting old. And that brings up the real proof of what a mess I have made of being a man: I am not even young. Just about the time they finally started inventing women, I started getting old. And I went right on doing it. Shamelessly. I have allowed myself to get old and haven’t done one single thing about it, with a gun or anything.

…I just am young and then all of a sudden I was sixty and maybe eighty, and what next?

Not a whole lot.

I keep thinking there must have been something that a real man could have done about it. Something short of guns, but more effective than Oil of Olay. But I failed. I did nothing. I absolutely failed to stay young. And then I look back on all my strenuous efforts, because I really did try, I tried hard to be a man, to be a good man, and I see how I failed at that. I am at best a bad man. An imitation phony second-rate him with a ten-hair beard and semicolons.

It must have been words such as these that inspired writer Neil Gaiman’s introduction of her in which he said that he always asked the question when writing, “Is there any reason that this character can’t be a woman? And if there wasn’t a reason, they were a woman.” (And if you want to read a bit more about their interactions this article is a cutie). 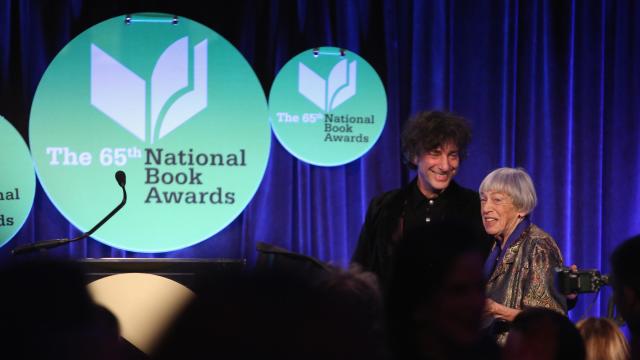 LeGuin was as on point as you would expect and won the day with several barbs at Amazon including, “We just saw a profiteer try to punish a publisher for disobedience, and writers threatened by corporate fatwa. And I see a lot of us, the producers, accepting this — letting commodity profiteers sell us like deodorant!” This was in reference to a dispute between the corporate giant and small publisher Hachette over e-book pricing.

LeGuin continued to skewer capitalism, saying, “Books, you know, they’re not just commodities. The profit motive often is in conflict with the aims of art. We live in capitalism. Its power seems inescapable. So did the divine right of kings. Any human power can be resisted and changed by human beings. Resistance and change often begin in art, and very often in our art—the art of words,” before thanking brave applauders. Fellow Autostraddle writer Ali Osworth was in attendance and described it as, “…on the nose, and everyone in the cheap seats loved it.”

She even championed sci-fi fans:

And I rejoice at accepting [the award] for, and sharing it with, all the writers who were excluded from literature for so long, my fellow authors of fantasy and science fiction—writers of the imagination, who for the last 50 years watched the beautiful rewards go to the so-called realists.

It’s worth reading her entire speech to feel good about literature adn the intersectionality it brings to public consciousness.

Below is a full list of last night’s nominees, with the winners in bold:

Alley has written 1 article for us.