Where there are hot gays, there’s bound to be a little fire and brimstone. New Orleans’ queer response to Mardi Gras, Southern Decadence, draws upwards of 120,000 gays to the city. Considering that the festival takes place in the Bible Belt, religious crusaders are pretty much a given. Home to a dozen or so gay bars, the four-block circle within the French Quarter is of interest to many intent on spreading the word of God.

NOLA’S street preachers were already receiving national attention long before this year’s festivities began. In late August, Reverend Grant Storm, one of SoDec’s biggest opponents was convicted for obscenity after being caught mastubating precariously close to a children’s playground. 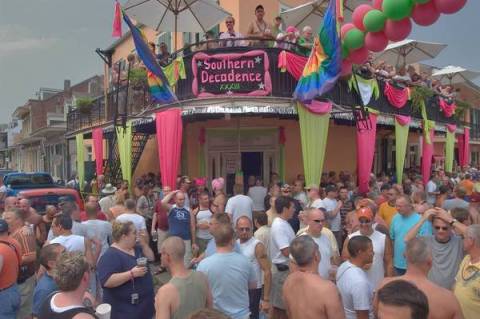 During Southern Decadence, eight preachers exemplifying everything that Jesus would not do were also apprehended. All men between the ages of 20 and 52, they ignored NOPD requests to turn off their bullhorns. Reports confirm that the men were yelling homophobic slurs at LGBTQ pedestrians. Wearing neon “Fear God” tees and toting “God Hates Homos” signs, the group vaguely resembled a poor man’s Westboro Baptist. A pastor unaffiliated with the eight was also arrested under suspicion of battery after allegedly punching an officer who tried to take away his microphone.

A fellow street preacher known as “Bible Brian” uploaded footage of the incident to YouTube–complete with a cryptic, apocalyptic soundtrack:

It might seem as if these men were merely justifiably arrested for disturbing the peace, not to mention being certified a**holes void of any decency or Southern hospitality. However, they were apprehended in conjunction with New Orleans’ “aggressive solicitation” ordinance, which instructs people to not “loiter or congregate on Bourbon Street for the purpose of disseminating any social, political or religious message between the hours of sunset and sunrise.”

This is where things become a bit complicated.

In theory, the year-old “aggressive solicitation” ordinance has good intentions. Bourbon Street has never really been a bastion of peace and tranquility. The law seems to be designed for nighttime crowd control and ensuring that the only shouting is of the happy, “Laissez les bons temps rouler” variety. Groups could stand to put the breaks on their community organizing skills for the nighttime hours.

While the ordinance does not discriminate against a particular social, religious or political group, none of this changes the fact that it is in gross violation of the First Amendment. After sundown, those handing out cute HRC equal sign stickers could potentially be silenced right alongside those yelling threats of Sodom and Gomorrah. As long as the ordinance is in place, any group wanting to say anything after dusk runs the risk of being arrested.

The lawsuit said Gros was a “professing Christian” and pastor of Vieux Carre Assembly of God Church in the French Quarter, a block from Bourbon Street. Gros has been preaching on the French Quarter’s streets for 30 years and doesn’t intend to harass anyone or solicit any funds, his suit said. “Because Pastor Gros firmly believes a large number of people found on Bourbon Street at night desperately need to have saving faith in Jesus Christ, he wants to go there at that time and share the gospel message with them,” the suit said. 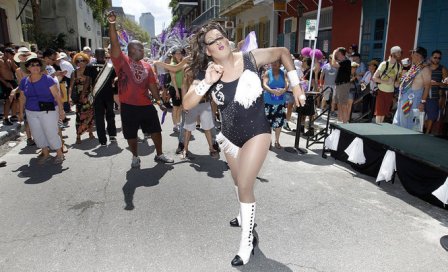 Within 24 hours, a judge had ruled in favor of Gros and Raven Ministries, placing a ban on the ordinance, effectively allowing pastors to do as they please after dusk:

A federal judge has temporarily blocked enforcement of a city law that was recently used to arrest Christian evangelists who were preaching on Bourbon Street during Southern Decadence, the annual celebration of gay culture in the French Quarter.

Part of the city’s recently enacted “aggressive solicitation” ordinance orders people not to “loiter or congregate on Bourbon Street for the purpose of disseminating any social, political or religious message between the hours of sunset and sunrise.”

While the United States Constitution overwhelmingly protects hate speech, the homophobic slurs New Orleans street pastors have a penchant for belting may very well fall under the category of “fighting words,” an unprotected form of hate speech which is “used to incite hatred or violence from a target audience” (read: the gays). Unlike 2011’s Snyder v. Phelps case, where the supreme court found that the Westboro Baptist Church’s actions fell squarely within the bounds of freedom of speech, the pastors on Burbon street appear to have talked to specific people instead of yelling at the group as a whole. Moreover, they were preaching in a street that is notoriously filled with intoxicated bar patrons. It’s worth asking what exactly their motivation is (do they really think drunk party-goers are going to decide that what they need right then and there is Jesus or is there the possibility that they hoped for some more sinister outcome?) and whether or not the presence of alcohol plays a role in deciding whether or not an action falls under the Fighting Words Doctrine. The case to either keep, modify or scrap NOLA’s “aggressive solicitation” ordinance will continue October 1.