Jodie was shaking in the driver’s seat as she grabbed her phone from her purse and fanatically dialed a number. She put the phone to her ear and panted as it rang.

“Goddammit is this Jodie? Did you not do it? God, Ellen was right, you are such a pussy.”

“HOW MANY PEOPLE DID ELLEN TELL I WAS A PUSSY?”

“It was on her blog, so probably about 4 million.”

“Dammit. Shit. Allison what do I do? You need to help me!”

“No, fuck you, I told you I don’t want to be a part of this. Or anything. That’s why I live in Vermont.”

“Allison, please. If Ellen finds out, she’ll kill me!”

“She won’t kill you, she’ll probably just write that you’re a pussy on her blog again.”

“Calm down. The prophecy said it’s really not supposed to get bad until this kid gets a trendy haircut. Then shit will get real. What’s her name by the way?”

“This whole thing is intense, Allison.”

“I have more bad news, though. She was with one of the devil’s higher ups.”

“Oh, I know him. When I did a reading at Carnegie Mellon, he was there. He was in the business school. He’s pretty chatty. He was telling me about his internship in Hell the summer before. But shit, Jodie, if he was there that only means one thing; this situation is potentially apocalyptic.”

“Oh my God, I might be responsible for the apocalypse.”

“Do you think they’ll take back your Oscars for that?”

“Oh God, no one is going to buy the 50th anniversary edition of Taxi Driver when it comes out in 2026. They’re going to be so mad at me!”

“No one is going to buy it because they’ll all be dead from the APOCALYPSE JODIE! Jesus, Jodie. Vermont can’t hide me from the apocalypse. You have to kill her. Before it’s too late”

“I know, I know. If we don’t tell Ellen, we should warn the others that she’s still out there, right?”

“What? Come on! What’re you doing that so important? Drawing?”

“You really think those little comics are more-” 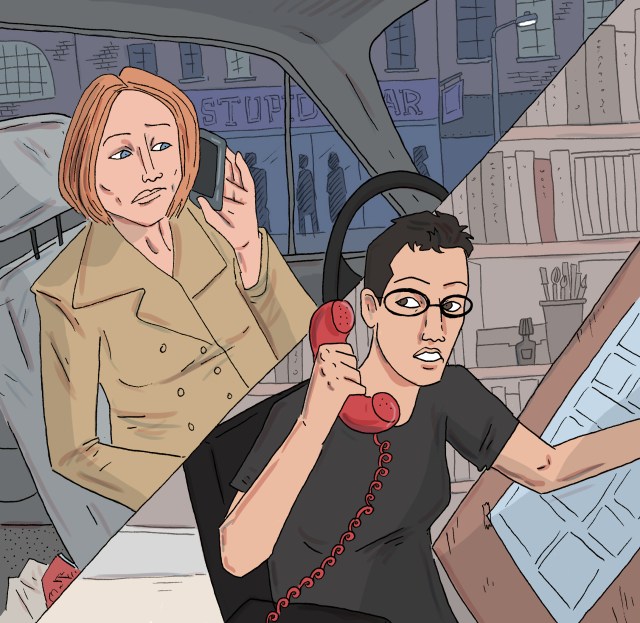 “Should I call the entire cast of The L Word?”

“Okay. What about the cast of The Real L Word?”

There was a pause on Allison’s line.

“Quit being such a pussy.”

Jodie heard the other phone click and frowned — not because of that sly diss, but because deep in her heart, she knew she was a pussy.