It was Tuesday, September 10th, and the weather in Mexico, Missouri was unseasonably warm. Blaze, empowered by her new name, was at Stupid Bar, which was Mexico’s stupidest bar and premier performance space. It was Talent Tuesday, and Blaze was making her big debut into the music world. For just under a year Blaze had been working on putting out an EP called Cool Kids Only, which was hybrid electronic music geared towards cool kids. The bar was filled with mostly pre-teens who had formed bands and sang songs that they thought were subtle, but were easily decipherable and clearly about their strict moms. The strict moms were also there (because they were strict), as well as some mingling locals, and a man in a slick suit.

In Stupid Bar’s back parking lot, Jodie Foster was sitting in her car breathing deeply.

“Come on Jodie. You can do it. You do it in movies all the time! Just get in, do it, and get out.” Jodie leaned over to the passenger seat and reached into her purse and gingerly pulled out a gun. Jodie grimaced and looked down.

“Dammit Jodie! Now’s your chance to prove to Ellen you’re not a pussy!” Jodie paused. “I know what will get you jazzed.”

Jodie dropped the gun back into her purse and pulled out her phone. She went on Youtube and searched “Clarice Kills Buffalo Bill”. She sat in the car and watched herself give an Academy Award worthy performance.

Inside Stupid Bar, Blaze tuned her guitar while a group of fourteen year old boys finished their set. They sounded as awful as one would expect, and it was obvious the people in the bar were not into it. A woman in a trench coat, sunglasses and a felt rancher hat low over her eyes stepped inside and hovered near the bar. The bartender approached her and asked, “Would you like anything? cocktail? Shot?” When he said “shot” the woman jumped and screamed “NO!” The bartender could not tell the jumpy woman was Jodie Foster, she was too incognito. The band onstage finished their song.

“That was ‘Just Let Me Go Out With My Friends’. We are The Deadly Thorns! Thank you so much for listening!” The lead singer stepped away from the microphone and immediately began packing equipment. The emcee (the owner’s wife Trish) stepped up to the microphone and began speaking enthusiastically.

“Wow, thank you so much, Deadly Thorns. Sounds like you boys are mad at your mom.”

The lead singer of The Deadly Thorns looked mortified and shouted nervously, “IT’S NOT ABOUT OUR MOMS!” and slammed his guitar case shut.

Trish continued, “Alright, give a warm welcome to a next performer, Blaze.”

Some people in the bar clapped, not everyone, though. Jodie Foster clapped in an attempt to not look suspicious. Blaze stepped onto the stage and suddenly Jodie felt her heart squeeze. Blaze’s power was clear to her. Jodie could tell that under those skinny jeans was the lesbian that was prophesized to end all lesbians. Jodie knew if she didn’t kill Blaze now, she would only get stronger and cuter until all the lesbians of the world were crushin’ on her. She would have more fan power than One Direction, Justin Bieber, The Jonas Brothers (when people still cared about them), and the Harry Potter series combined. With all that angst heading in the same direction, chaos would break out across the world. Jodie reached into her purse and touched the gun.

Blaze hit a button on her laptop and picked up her guitar. She started shredding while the laptop played a modest back beat. Blaze stepped up to the microphone and began to sing. The bar was suddenly still, all watching completely rapt by the girl on stage.

Even Jodie couldn’t believe what she was hearing; the girls talent reminded her of her own.

“She’s almost as good as me in The Silence Of The Lambs. And I won an Oscar for that,” she thought.

Blaze finished the song, and the applause came quickly, with gumption. Blaze smiled, as if she were not surprised by the reaction.

“It’s the name,” she thought, “Katie was a shitty musician, but Blaze is fucking awesome and should maybe tryout for The Voice.”

Blaze leaned into the mic. “Thank you. Thank you. This next song is called ‘Alright, Cool’.”

Blaze hit her laptop and picked up her guitar. As Blaze sang, Jodie looked around the bar. It was mostly men, split between the bar regulars and the preteens in bands. There was one man in a nice suit, but Jodie ignored him; she was looking for women. She spotted Trish, the emcee, standing next to the stage. She seemed to be watching Blaze with a blank expression and kept crossing and uncrossing her legs, then, seemly exasperated, Trish ran into the bathroom.

“Dammit,” Jodie thought, “her power over women is undeniable. There is no doubt she is the one.”

Jodie wrapped her hand tightly around the gun. 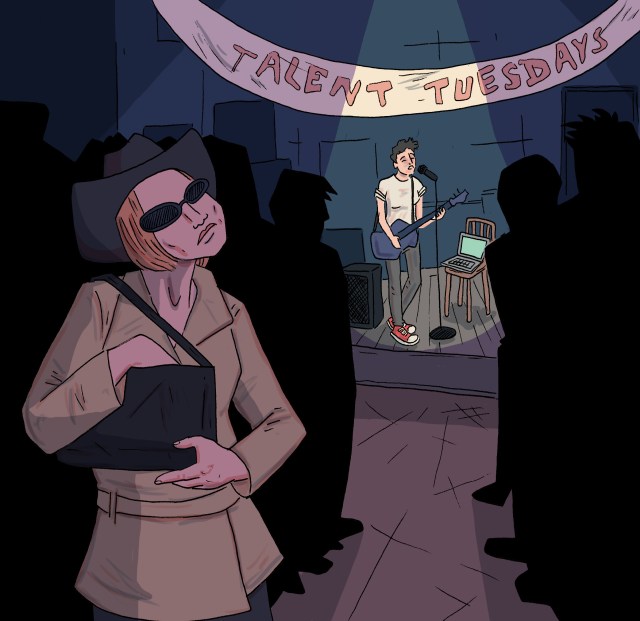 Blaze played two more songs, thanked the crowd and stepped off stage. Jodie knew it was time to do it. With her hand still in her purse, she made her way through the crowd slowly. Jodie could feel the sweat on the nape of her neck dripping down her back. The sound of the room disappeared as she moved closer and closer to Blaze who was concentrated on coiling various wires.

“This is so intense,” she thought. Breathing slowly, Jodie lifted the gun from her purse, but before she could pull it out completely, she was suddenly blocked. The man in the nice suit had jumped between her and Blaze.

“Howdy, that was a great set,” said the man, offering his hand to Blaze.

“You’re a real talent. My name is Louis, and I’m an independent producer. You haven’t been signed, have you?”

Blaze looked startled. “Um, no, this was actually my first performance.”

“Amazing! Hang on, one second.” The man whirled around and faced Jodie. He flashed a big toothy grin at her. Jodie recognized him immediately; Louis was short for Lucifer, he was one of the devil’s henchmen. Jodie had met him while filming The Beaver. He had been eating lunch with Mel Gibson (they were friends from Gibson’s anti-Semitic days). Louis held a C-level position in Hell — CFO or COO — Jodie couldn’t remember. But basically the devil sent Louis out when there was damage of epic proportions to be done. Jodie’s stomach dropped to her feet and Louis bent to greet her.

“Hello, what brings you here to Mexico, Missouri?” he inquired.

“AH! NOTHING?” Jodie stammered. Blaze leaned over to see who Louis was talking to.

“THANK YOU IT’S FROM ANTHROPOLOGIE. I MUST GO, GOODBYE!” Jodie turned and ran out of the bar.

“Ellen was right! You are a pussy!” Louis shouted after her as she slammed out the exit.