The Stanford Daily unearthed an OpEd written by the 1992 version of Cory Booker, now the mayor of Newark, N.J. In his piece, “Pointing the Finger at Gays,” Cory Booker admits to being homophobic.

Yet, while I was highly adroit at maintaining an air of acceptance, I couldn’t betray my feelings. I was disgusted by gays. The thought of two men kissing each other was about as appealing as a frontal lobotomy.

Allow me to be more direct, escaping the euphemisms of my past – I hated gays. The disgust and latent hostility I felt toward gays were subcategories of hatred, plain and simple.

And then he talks about how all that changed.

It takes too much energy to hate. Daniel Bao showed me that. He was our gay counselor at The Bridge when I was a freshman. A beautiful man whose eloquent and poignant truths began to move me past tolerance.

I still remember our first real conversation about homosexuality. I had no intention of listening to him; I only sought to argue and debate. Daniel, however, quickly disarmed me with his personal testimony.

Oh, if only I could recount to you the entire conversation. He told me of people who religiously prayed to God to help them become straight. He told me of the years of denial and the pain of always feeling different.

And he told me of the violence – violence from strangers and family, horrible images of beatings, destruction of property and the daily verbal condemnations.

Booker goes on to point out that those stories are similar to the ones his grandparents told him. And that’s how he moved from “tolerant” (a word I’ve always despised) to “seeking to embrace” the gay community. I encourage you to read the article.

Normally when a straight person writes about not hating gay people, my first action is an eye roll and my first thought is “Congrats. You’re a decent human. You meet the bare minimum requirements for decent human.” And when a politician writes it? My first thought is “actions speak louder than words, buddy.” Cory Booker has done the actions and spoken the words, which is why no eyes were rolled that day.

It’s not just because Cory Booker is singularly cool. I follow him on Twitter: who could forget the hot pocket tweet? Or when, in 2010, he used Twitter to help Newark residents get unstuck after the blizzard? It’s not because I grew up in New Jersey and have seen Newark morph under Booker, though that is impressive and important. It’s not even because, like most native New Jerseyans, I love Mayor Booker with all my heart and soul and hold him up as the gem he is to counteract the image that others have of us, so often perpetuated by The Jersey Shore or The Sopranos. It’s because Cory Booker walks the walk and talks the talk when it comes to gay rights, and because this piece was honest. This piece explains “tolerance” as the cop-out that members of the LGBT community know it to be. It is for a college audience in the 90’s and is a reflection on a young person’s quest to be a better person, something that as adults we probably don’t do enough of. 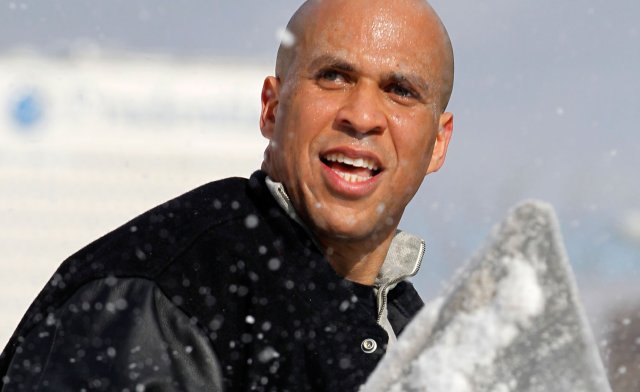 Booker dares to do something that not many of us care to do, something that signaled huge maturity, especially back in ’92: he admitted to hate. He admitted to not being perfect. He took us on the journey and showed us how his thoughts changed. And he did so without political benefit to himself – he was still a student when this piece was published. We shouldn’t dismiss his (or frankly, any other) ally experience, as long as it’s as honest as this. This OpEd was not for the LGBT community alone, but rather it was a piece to transform haters into allies. It was and is an example of how an opinion can actually, truly change. It wasn’t just, see? I have gay friends! Vote for me! As Hansen wrote back in September whilst we were wondering why there were no gay people in marriage equality, sometimes straight homophobes need straight allies to “hold [their] homophobic hand down the lane of compassion and understanding and all the way to the ballot box.” Cory Booker, with his extreme popularity, is doing our community a service in the same kind of way. The audience this OpEd was and is trying to reach can probably see themselves in the statement “I had no intention of listening to him; I only sought to argue and debate.” Hell, I can see members of my family in that statement. 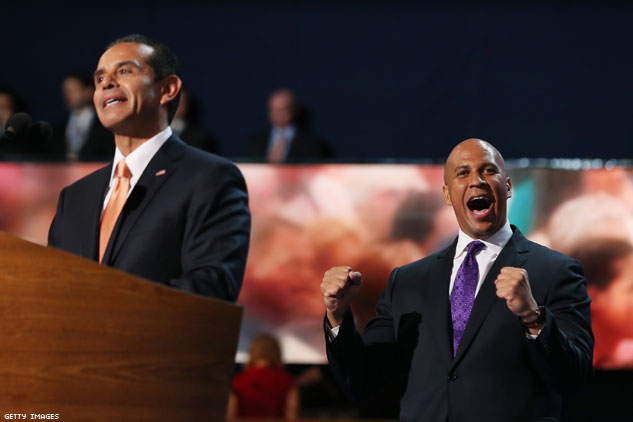 Cory Booker cheering as the DNC adopted marriage equality into the platform, via The Advocate.

Put this kind of opinion shift beside the opinion shift of other politicians or people playing in the political sphere, Chuck Hagel for instance. While Chuck Hagel did apologize for his bigoted remarks, it’s unclear how his journey took place. It’s unclear if his apology is motivated by his desire for political gain, though as he hasn’t had an anti-gay voting record, we can hope his apology is actually indicative of a paradigm change. Or beside Pastor Louie Giglio’s withdrawal from President Obama’s inauguration, which is frankly infuriating and doesn’t address his hate or bias at all. The contrast is exquisite and large. It is comforting to know that a political player exists who had this revelation a while ago and has stuck with it ever since. It’s refreshing to see a resurface instead of an apology in the moment that could be construed as insincere or for political gain. As someone whose decision to leave New Jersey was partially based upon Governor Christie’s abysmal gay rights record, I wish Mayor Cory Booker was in charge of more things. Mayor Booker took the podium to praise the DNC adopting marriage equality as part of their platform. He did the very first HRC Americans for Marriage Equality campaign video. Someone with a bright political future has our backs. Isn’t it wonderful?

I cannot wait to see the kinds of policy changes and advocacy from a politician who had this kind of honest revelation and quest to be a better ally back when it wasn’t in vogue. Cheers, Cory Booker. Cheers to you.