Never have I seen a game that is more specific to the Autostraddle community — maybe Gone Home. Maybe. But this game was basically made for us all. Jane Friedhoff’s Slam City Oracles is a smash-em-up game where you rocket two badass beings into the ground, buildings, clouds and whatever the fuck else they can hit — and you do it all to a riot grrrl soundtrack. Here’s the game trailer for a little glimpse:

You read that right — two beings. This game is a local two-player, meaning two people in the same room play together (not via the internet, gotta be in the same room). I tried playing this originally by myself, operating both characters. That went… well it was something, alright. And when I asked Jane (badass queer coder alert, y’all), she said that enough people have asked about a single player that she may add it in the future as the game gains traction. But currently, it’s a game for you and your bestie. So I phoned a friend. When we were very small, my friend Laura and I used to sit in her dad’s giant computer chair at his desk and play computer games together, side by side. We played everything from Gungan Frontier to Roller Coaster Tycoon — she’s always my go-to person for any local multiplayer game. She literally dropped things from her day to come play this game with me for half an hour.

As an aside for a moment, the fact that it’s a local multiplayer is one of the things that drew me to Slam City Oracles. In my heart, I am a person who plays tabletop games. I’m not exactly a video gamer because I prefer to interface with my people IRL. That’s the enjoyable part of games for me. So local multiplayer video games have always been my jam because it’s like table top games on digital steroids — you get the interactivity, parameters and art of a video game, and the friendship-to-the-max-ness of table top gaming with a buddy that you can actually speak to in meat space. But I digress.

The other thing that drew me to Slam City Oracles was the artwork, by Jenny Jiao Hsia. It’s so bright, happy and playful — it reminds me of a cross between the animation style of Adventure Time and our own Anna Bongiovanni‘s work.

Hsia’s aesthetic lends the slam-em-up a mischievous and nonviolent feel that I find unique to this game, like you’re wandering through an imagined world full of blocks and, like we all did when we were four or five, pretending to Godzilla things over with absolutely no consequences. So many slam-em-up games feature bloodshed and violence, and this game is more about disruption and chaos. Which brings me to my next point —

Upon playing it, Laura called it Super Smash Sisters. And yeah, basically. Except you’re beating up on the world instead of on each other. That seems so important to me — both the playable characters appear female (though I may be projecting onto them as we are wont to do when controlling tiny characters), and the fact that they exist in a game that’s not a catfight for the male gaze says something really valuable about female friendships in a gaming context. When you all inevitably play this game, I’d love to hear what you make of the mischievous disruption these two friends wreak on their environment. And speaking of lady-awesome, this game is made entirely by women. SO TAKE THAT, MALE-DOMINATED INDUSTRY.

And the music, oh the music! By the Brooklyn-based, woman-fronted band Scully (I told you there had never been a more Autostraddle game ever) — it just fits so damn well. It’s the perfect soundtrack for frustrated destruction — and that is exactly when I recommend you play this game. When you want to smash all the patriarchy and feel thwarted, play this game. You will feel better when your two minutes are up. And you’ll probably also feel better when you’ve phoned a friend. I know Laura and I were ecstatic to relive our childhood sleepovers of gaming co-operatively, shoulder-to-shoulder, even just for a moment during our very busy day. In short, the game is good all around. On a scale of one to ten magical pizza slices, I give it an eight. 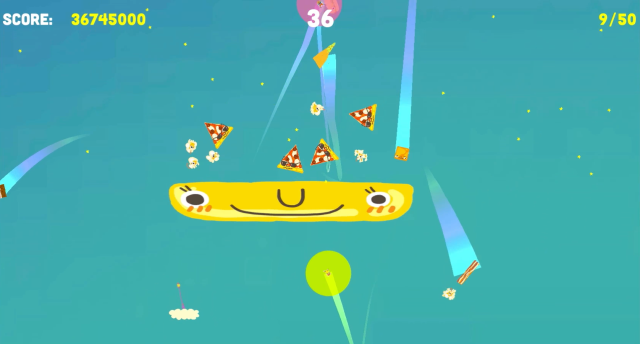 I have only two criticisms — I would love a single player mode for when I’m too surly to smash with a sister, or if I come home from class late at night and could use a bit of chaotic, forceful re-ordering to shake it out. But hey, that might be coming anyhow. And I also don’t know what the up button does — SOMEONE PLEASE TELL ME WHAT THE UP BUTTON DOES? That might be my bad, though, I’m not super great at video games.

Slam City Oracles will be available for download on September 1st (that’s this Tuesday) for Mac and PC — but Jane has offered to soft-launch it for Autostraddle readers TODAY. The game also supports XBOX 360 and Playstation 3 controllers, which we did not play with this time around (but plan to when we plan better and play at Laura’s house where she has her XBOX). It’s a pay-what-you-wish price tag, so everyone download and play this week. If you’ve got a Straddler friend you can call, I highly recommend setting up a Slam City Oracles playdate — you won’t regret it.

This has been the one-hundred-forty-third installment of Queer Your Tech with Fun, Autostraddle’s nerdy tech column. Not everything we cover is queer per se, but we talk about customizing this awesome technology you’ve got. Having it our way, expressing our appy selves just like we do with our identities. Here we can talk about anything from app recommendations to choosing a wireless printer to websites you have to bookmark to any other fun shit we can do with technology. Header by Rory Midhani.