Summer is my favorite season because drinking beers outside is my favorite hobby. This summer, I’m unemployed, and theoretically that leaves me so much time for drinking beers outside. But an unfortunate side effect of unemployment is that I can’t afford to buy beer. I can’t really afford to buy anything, really. So I can’t really afford to leave my house. Which is actually not that bad because I like staying home almost as much as I like drinking beer outside, and my second favorite hobby is playing video games. But then the other thing is that my apartment is not air conditioned, and my computer is in an actual closet, which is the actual hottest place in my very hot apartment. So basically I can play video games before noon or not at all, which means I need to get over the morning sadnesses by like 10am to get anything done. 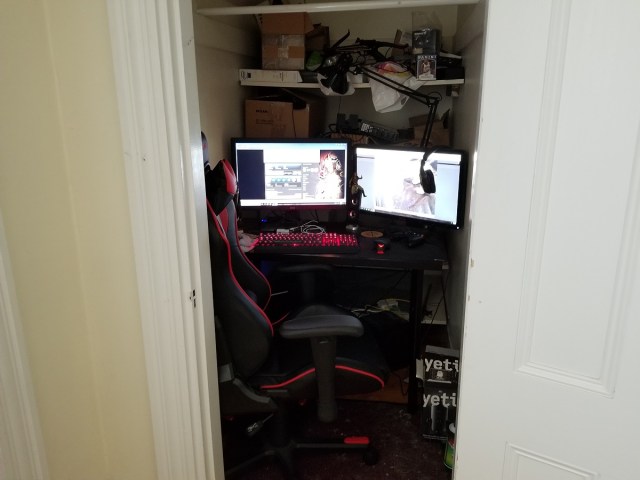 Where the magic happens. Yes that is a lot of cat hair don’t @ me.

Not gonna lie, mostly I’ve been doing nonogram puzzles on my laptop until my eyes stop working and I need to take a nap. (These are okay, and they’re free!) I’ve also been addicted to the companion app for NBA 2k17, which is basically a basketball card collecting simulator, but with a constant stream of free cards so I never feel tempted to spend money on it. I downloaded the app to earn extra points for the actual game, which I play like an RPG as a shooting guard named Spencer Hastings who is best friends with Dreamboat Actor Michael B. Jordan. But the app I can play on my phone in front of a window, whereas that game I have to play in Hades? So my card collection is progressing faster than my rookie season. This introduction is leading somewhere, I promise!

So I’m biding my time playing this dumb basketball RPG when I see this game that looks super pretty, and then when I try it, it turns out to also be a basketball RPG! That game is Pyre. It’s the newest release from Supergiant Games, the studio behind Bastion (never played it) and Transistor (really liked it.) This game was on my wish list because it was tagged with things that I like (indie, RPG, story-rich) and because I liked the colors. I guess purple goldish sunset colors are the key to my heart. 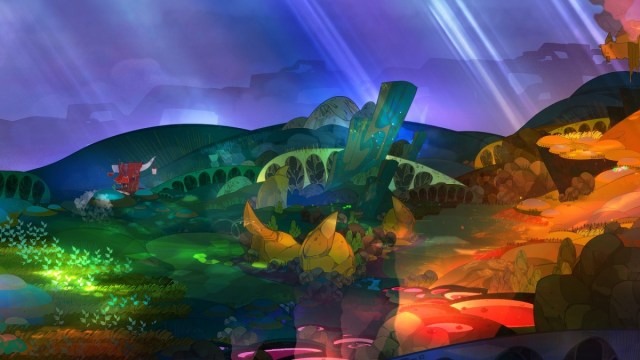 Right off the bat, the game is just visually excellent. The shapes and colors of the world, and the postures of the characters when you see them in action, it feels very lovingly drawn. The style kind of reminds me of The Secret of Nimh. I want to see more of the world than the world lets me see, which is a great thing about the art but maybe a less great thing about the game?

The premise of the game, without getting too spoilery, is that you are an outcast in a land of outcasts. You’re found dying in the desert by some masked somethings, and one of them is like “Looks almost dead. Well then, get on with it,” but instead of murdering you they’re like “Would you like to join our traveling band of best friends?” They need somebody who can read. I can read. It’s a match made in heaven.

The lore of the game is that there is a great kingdom called The Commonwealth, which has been long at war with bird women called The Harps. If you commit a crime in The Commonwealth, you are banished to The Downside, which is where this game takes place. But rumor has it there is a way to earn back your “freedom” and return to The Commonwealth. So that’s what our traveling band is up to. The way out is through something called The Rites, and The Rites can’t be performed without a Reader to conduct them. So you do The Rites, and then you travel to the next one and do it again, and on and on across the landscape. And it mostly doesn’t matter if you succeed or fail, the road goes on, but then something changes. You learn how to achieve freedom, and you learn the limits of that freedom. The fine print and red tape and the hows and whys, and the possibility that there is something more important than getting home to kiss your girl or your mom. There’s a twist, or not even a twist so much as an eyebrow raising development, and the story becomes honestly a little subversive for such a pretty gentle game. You need to stick with it, though, because it took me some three hours to get there. In the meantime, though, there are The Rites. 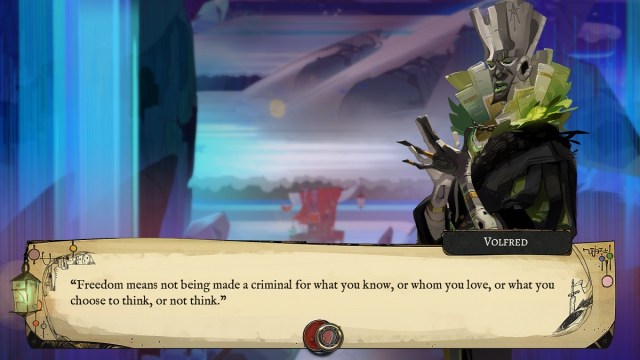 The Rites are basketball. Three-on-three magic basketball like some kind of NBA Jam played in wizards’ raiments. And you, The Reader, are essentially reading the playbook while your traveling companions do the heavy lifting on the court. The rules are this: Each team has a pyre, which is basically a basketball hoop, and you want to dunk (or shoot) the magic orb into your opponent’s pyre enough times to fully douse it before than can do the same to you. You can sprint, jump, and pass the rock, but the other team can banish your team members by getting close to them or shooting their “aura,” and you can do the same to them when they have the ball.

You can only move one person at a time (but it’s real-time, not turn-based,) so positioning and passing is essential. Each party member has different strengths (like big, powerful demon dreamboat Jodariel can wreck opponents but is very slow, or sweet; nervous doggo Rukey is fast as heck but not great on defense). And there is some light RPG skill tree leveling for each character. In between Rites, every opposing team brings in new challenges, and the arenas you play in each have unique terrain that can affect your playstyle. It’s a lot of fun! And even though the loading screen stress that it doesn’t matter if you win or lose, you’ll really want to win. (And by the way, you will definitely want to use a controller.) 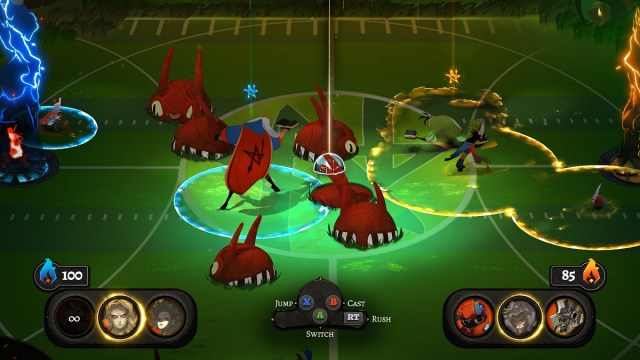 The rest of the game plays out in visual novel style text cards and watching your little wagon traverse the landscape. You talk to your companions in between Rites to learn about their backstories and fill in their character cards. They might have suggestions for the route you take to your next basketball game or they might just want to hear themselves talk for a minute to de-stress. They seemed a little flat and tropey for a lot of the game, but after a while I realized that I had grown pretty fond of most of them. It sneaks up on you a little. 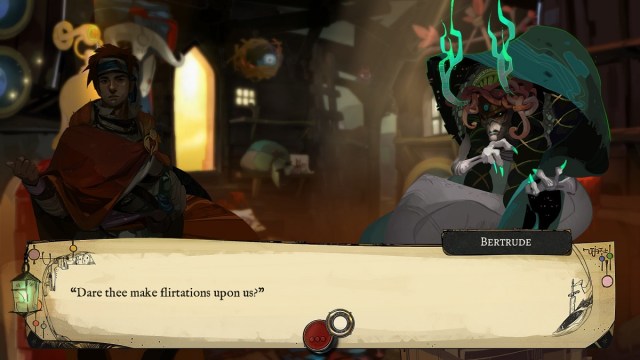 Totally stealing this line by the way.

I will say that there’s a little dissonance between the frantic action of the Rites and the point-and-click of everything else. Also the character cards feel out of place with the rest of the art in the game. They’re well drawn but generic. It feels a little like two games stuck together. The story itself is great but the execution of telling it is lacking. And the Rites themselves are fun to play but don’t have quite enough depth to carry the entire game on their back. But the lore is so startlingly compelling and the world is so beautifully imagined, I really want to play in it! I want to see these characters moving around and being a part of everything instead of just having their lifeless portraits tell me about what they’re doing. I want a fully playable RPG in this universe. Like, I really really want it. There is a freshness and a living quality to this world that feels squandered here. That’s not the kind of game this studio makes, but they have a seed here that could grow into whole goddamn jungle of adventure. Or maybe I just need to write Jodariel fanfiction. 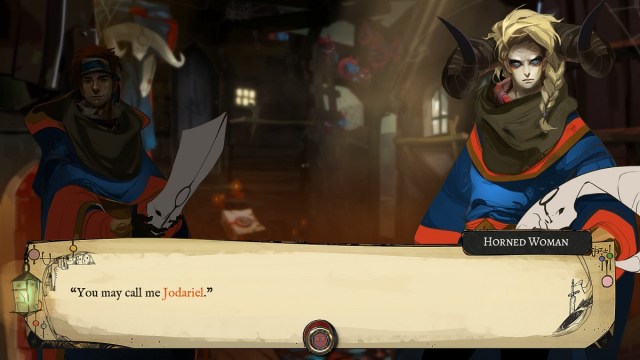 Pyre is available for Windows and Linux on PC, and for Playstation 4, for $20. There’s also a local versus mode so you can play magic basketball against a friend in the same room with you, but no online play. I think the price is right for the level of polish and for the length of the game, but keep in mind it’s at least 40% visual novel, so maybe wait for a sale if that’s not your thing.

In conclusion, this game is very pretty, and the mystical basketball is fun enough to keep my in my boiling hot closet office until at least 1pm as long as I stay hydrated.