I have a terrible confession to make – I’ve never seen The L Word. Wait, wait, let me explain. I was only fifteen when the show stopped airing, and by the time I was throwing myself into the kind of online communities that might have persuaded me to check out reruns, everyone had moved on to just dunking on The Real L Word anyway. More importantly, though, we had our own sapphic televisual cross to bear over here in the UK: Lip Service.

If you were being polite, you’d call Lip Service the BBC’s answer to The L Word. If you were being accurate, you’d call it the BBC’s knock-off of The L Word. Swapping out glamorous West Hollywood for the slightly less glamorous Glasgow, it followed a group of queer women in their late twenties as they bumbled around cheating on each other with each other. Of course, by the time Lip Service premiered in 2010, The L Word‘s heyday was long over and it had been off the air for a year, making the BBC’s timing questionable at best. However, the question of why it was commissioned in the first place pales into insignificance when you come to asking why the BBC chose to air a show about lesbians turning thirty on its youth-oriented channel, BBC Three. If you wonder why it only lasted for two series, that might have something to do with it.

Of course, there may be a few other reasons. Mainstream (i.e. straight, male) critics hated it, and the reaction from the community was mixed. Its portrayal of the Glasgow queer scene isn’t exactly realistic; everyone’s middle-class as hell, and there’s barely a butch to be seen. Unfortunately, it maintains steadfastly accurate in one aspect where I wouldn’t have minded a detour from reality – the sheer whiteness of a large portion of the Scottish queer community. And let’s have a show of hands: who just fast-forwarded through every episode to get to the sex scenes?

Surprisingly for anyone who was a teen when Lip Service aired, there was actually an entire TV show between those sex scenes. Let’s take a walk down memory lane together, shall we?

Lip Service is set in the strange and distant world of, like, five years ago, where everyone apparently talked about Facebook all the time and hair could look like this: 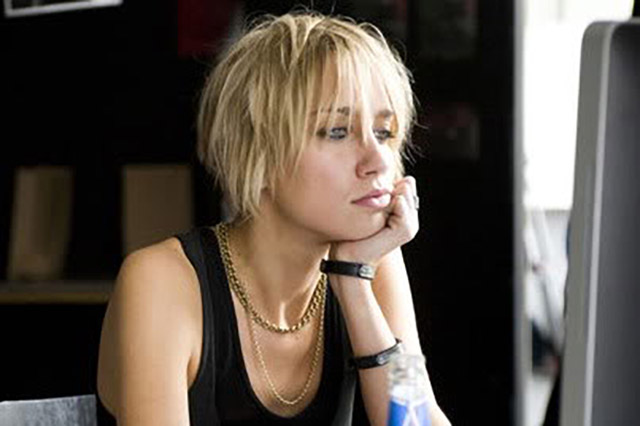 For a show that lasted for a grand total of 12 episodes, it’s surprisingly hard to pin down. The closest thing it has to a focal character is killed off early in the second series, in a plot twist best described as “awful bullshit.” Characters just kind of wander in and out the show, generally taking plot points with them. More often than not, said plot points involve two characters fucking. Ruta Gedmintas – who played edgy late-twenties bisexual and unfortunate owner of the haircut above, Frankie Alan – probably summed up the show’s philosophy best when she told an interviewer “[W]e’re not trying to do anything that hasn’t been done before. We’re just making a relationship drama.” And drama it certainly was, with love triangles, firings and mysterious family histories aplenty.

Unlike The L Word, Lip Service was never particularly interested in “issues,” unless that issue was your girlfriend cheating on you with her ex. The closest it came to a Very Special Episode was a brief, aborted flirtation with a storyline on homophobic discrimination in the workplace and men frequently being The Worst. No, what Lip Service was interested in showing you was sex, and lots of it – sex involving razors, sex involving funeral homes, sex involving condiments. Honestly, it was a trip. Maybe one of the bad trips that make you feel like your face is falling off, but a trip nonetheless.

Speaking of trips, drugs are second only to sex in Lip Service‘s passions, and everyone on the show is almost constantly off their tits on something. There were grumblings when the show aired that this played into harmful stereotypes about LGBTQ women, but having spent a fair few winters in Scotland, I can assure you it’s probably just so they can keep warm long enough to stay naked for all that sex.

Sometimes, the show’s many, many characters could be charming, particularly when they were flirting with each other. A lot of the time, however, they were kind of terrible: the main cast, their never-ending rotating cast of lovers and exes, the token dudes (especially the token dudes). The problem with a relationship drama like Lip Service is that, unless you want the main conflict of every episode to be whose turn it is to do the washing up, everyone has to be a pretty shitty person.

Honestly, when I sat down to re-watch Lip Service in preparation for writing this, I was intending to do a proper series recap. I took notes! I remembered the show as a soapy lesbian melodrama with some decent sex scenes. But halfway through series one, I realised you could sum up almost everything that happens in the series in one sentence: shitty people making each other feel shitty. Now, I’ll admit, that’s also a sentence that could sum up basically every hit television drama this decade and half the comedies as well. But I’m sick of shows that promise representation of queer lives, only to deliver endless misery and death (I’m looking at you, Orange is the New Black).

Honestly, it all makes for pretty depressing viewing. Even Rubies, the lesbian bar that the cast frequents, is kind of depressing (which, let’s be honest, is the main way you can tell Lip Service was created by a Real Life Lesbian). In reality, the only lesbian bar in actual Glasgow shut down years ago and was depressing in its own special way in that it featured a jelly wrestling pit. In order to discuss who’s fucking who, the cast of Lip Service would now have to travel for over an hour to Edinburgh’s sole lesbian bar which, funnily enough, is named after the bar in The L Word. It features no jelly wrestling pits, just a lot of pool tables and women in North Face jackets.

Come to think of it, the story of queer women on TV since the days of Lip Service and The L Word is a lot like that of lesbian bars over the last decade. Just as physical spaces catering specifically to lesbians are disappearing, you don’t really see mainstream(-ish) shows that explicitly revolve around girl-on-girl relationships anymore. But is that necessarily a bad thing? Not all queer women feel at home in the traditional lesbian scene, and barely any of us felt represented in shows like Lip Service. And yet we watched devotedly anyway, because it was more or less all we could get.

A study conducted on BBC programming the year Lip Service first aired found that queer women were featured for one minute out of every 20 hours of programming, and that same year’s GLAAD report records a total of nine queer women among series regular characters on American television. 2016’s GLAAD report, meanwhile, found 42 queer women on streaming services alone. Just as (for better or worse) our community is no longer confined to lesbian bars, queer women on television are no longer confined to shows about queer women – we can see them in all kinds of stories. Of course, they’re probably still going to be cis and white and still get killed off in the end. But thank goodness for the internet, where we can tell our own stories that reflect the real diversity of the LGBTQ community and where nobody dies.

They don’t make shows like Lip Service anymore. When I sat down to rewatch it, I thought that was a sad thing. Now I’m not so sure. Just before its second series began, AfterEllen published an interview with the show’s creator, Harriet Braun. When the interviewer asked her about criticism over the cast being too white and femme, Braun’s response was that “I think the answer isn’t to put the pressure to represent everyone on one show, but to get more lesbian characters on TV in general.” Well, it’s not my job’ is always going to be a bullshit answer when a showrunner is called on a lack of diversity, but maybe she has something approaching a point. We should celebrate the fact that we don’t have to rely on shows like Lip Service for representation anymore; we can see LGBTQ characters everywhere from Cartoon Network to HBO. Sure, it’s not perfect – but it’s a lot better than how it used to be.

Heather has written 1 article for us.