I’m a digital learning teacher and currently run a moviemaking workshop for Bronx teens, and presently we’re looking at how camera angles operate as the “secret weapons” of visual storytelling — manipulating emotions by controlling the presentation and amount of information an audience receives. The concept of “Black Friday” works similarly.

The holiday season can be a free-for-all for the powers-that-be who jump at the excuse to fuck with us just a little bit more. Corporations “sell” Black Friday by barraging us with relentless campaigns that serve to exploit our dwindling spending cash levels and amp up the continuous state of feeling like we’re running out of time. They’ve inextricably linked Black Friday to the rest of the holiday season and are exploiting love, anxiety and poverty as a driving force behind another made-up money-making holiday.

Black Friday is the busiest shopping day of the fiscal year and the most notorious. Huge retail chains, like Sears and Best Buy, advertise obscenely low prices for many of their hot-ticket items, like flat-screen TVs and laptops, and set discount parameters that transform Black Friday into the jaded vengeful mistress of the holiday season. The sales begin at ungodly hours, thus screwing with family time and torturing their employees. This year Best Buy’s opening at 12AM on Friday and will “hand out tickets up to two hours before the midnight opening.” Wal-Mart, the epitome of an evil corporation, is opening at 8 PM on Thanksgiving Day for “Event 1” and 10PM for “Event 2” for those desperate for a new TV, Laptop or Blu-Ray player. If you’re willing to skip Thanksgiving altogether, you can visit Target, which will start its Black Friday deals on Thursday. That must really suck for everybody who works there. Macy’s is another store opening on Thanksgiving Night to get the jump on Black Friday earnings. How ’bout you give me a minute, son? Jeezus.

Furthermore, fine print trumps all of the big sale signs: there are limited quantities of these items, and you just might get trampled over that flatscreen TV.  Ok, ok, I really don’t want this to turn into an overly militant anti-capitalism rant. Pause. I get that some of us wake up early on Black Friday to engage in delirium-fueled, shopping-based hooliganism with relatives, friends, your whoevers and then crash for the rest of the day. You’re ok with that and so am I. But fuck, it’s still a day that’s been co-opted and re-packaged to control what we do.

there better be enough Kindles for all of us…

Since the late 19th century, major retailers in the United States have made it their focus to bring shoppers into stores immediately after Thanksgiving as a way to provide an ‘official’ start to the holiday shopping season. Obviously there weren’t any flatscreens back then or Macy’s commercials, so stores hosted parades to excite and encourage people to hang out and crack open their change purchases. It sounds kinda awesome, actually, like, okay, you want me to support your business so at a reasonable time of day, a parade is thrown for my enjoyment, and then I can leisurely stroll around either alone or with people I love and peruse all your pretty goods? Deal. Back then it wasn’t even called “Black Friday” and it lacked all these Fear-Factor/The Gauntlet-type obstacles. In fact, “Black Friday” is the term Philadelphia cops, taxi drivers and bus drivers coined in the 1960s as a way to describe the massive traffic problems caused by throngs of people out in the city on the day after Thanksgiving.

Retailers eventually revamped Black Friday into what it is today, forever altering our view of consumer chaos. Modern retailers — I’m looking at you Wal-Mart, Target, Best Buy, Macy’s, Loews, etcs — have tried to sell that chaos into something endured for the love of family. As I said, city workers in the 60’s dubbed it Black Friday because shit got crazy. There were mad people everywhere and they would have probably preferred to be home with their families instead of out in the streets with the crazy. But they went anyhow, following the lure of ridiculously low prices, and the tight timelines for when such deals exist give panic its proper role as fuel.

Panic pushes into competitiveness until they become this super force that urges people out of their homes at 3am and onto lines to buy goods so that they can be the one who gets the deal. Is this really a deal though? Hey Gabby, you want this new shiny thing that goes beep beep and plays Beyoncé videos? You know I do. Ok, well all you gotta do is wait outside in the cold, dark parking lot while you’re still drunk and full from Thanksgiving. I’m gonna pit 500 other people in the line with you and only provide enough magic beep beeps for 1/10 of the people. Just get through the horde, find the prize, and give me your money. Are you serious, bro? Can I just like take a nap and forget you ever propositioned me with this bullshit? 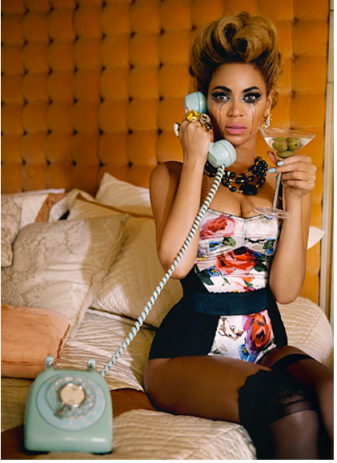 I’m already anxious. Also, if the idea behind Black Friday is that obtaining these low-priced must-have items so early in the shopping season will ease your worries about not obtaining adequate gifts for your self/family/friends/fuckbuddies — why would they have to sell it so hard? It’s pushed so heavy because that shit is a joke! There are sales all year-round in all major big box retailers and department stores in the United States. Just throw a dart at your Autostostraddle calendar and I’m sure some mall somewhere has a sale going on. 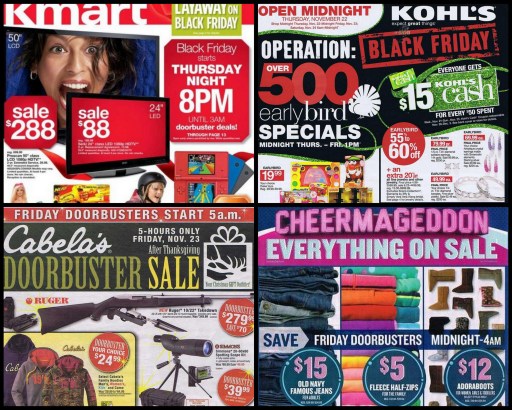 The best way to get people in this country to do something is to invoke fear and hand out credit cards. Funny, they play on the anxiety created by potentially missing a sale but fail to discuss the real anxiety faced when those credit card bills and monthly payments for whatever luxury item purchased start rolling in. Why don’t they make commercials warnings for that, man? Fear + people using credit cards to buy shit they don’t need/can’t afford * chaos = F.U.B.F.

And credit card debt is far from the worst consequence of stoking people’s fear and consumerism so hard in a 24-hour period. In 2008, Jdimytai Damour was trampled to death by a Black Friday mob at Wal-Mart. Here’s what a typical Black Friday morning looks like at a major retailer:

Is it ok for us to behave this way for shit we’re just going to re-buy next year? For shit that doesn’t biodegrade or say “I love you so deep and this is what I’ve wanted to gift your soul with the entire year?” Is it okay that you can click on a link titled 13 Most Brutal Black Friday Injuries/Deaths?

But honestly what bothers me the most is this: why is it okay for corporations to encroach on our time to reflect, give thanks and be loved? That’s how I non-denominationally view the time period that begins on November 25th-ish and runs until January 3. Yes, we should maintain those feelings all year round and be super queers but fuck it’s hard sometimes. I think it’s dope to dedicate a season to focusing on those sentiments and giving them their due. They get lost during the year, you know? We don’t mean it but shit happens. We’re busy getting degrees in QPOC gender studies, organizing hurricane relief, binding breasts, and teaching kids in the Bronx how to become filmmakers. Black Friday isn’t our problem. To me, Black Friday is the close-up shot that highlights what we allow in our lives and in our traditions and how much control corporations have on the way we celebrate holidays.

Black Friday is my birthday.

Is Black Friday just a thing in the United States? I’ve heard that Boxing Day in Canada has a similar shopping situation going on? What’s Black Friday like in your country? Does it exist? Please, tell me that it doesn’t. Tell me that the rest of the world runs on the love and patronage of autostraddle, flea markets, craft fairs, artisans, DIY gifts and geeky corny love stuff that doesn’t have anything to do with a sale.