Remember when you were in grade school/high school/college, and you used to go on field trips? And while you were out, it was all about how cool it was that you weren’t sitting at a desk all day, and instead you were looking at dinosaurs or art or learning how caramel is made. Maybe getting stoned behind the museum. Whatever. You were out there. You were doing it, and you were having fun. But at the end of the day, your teacher sat you down and made you write the same essay again and again: What did you learn?

And I’ve done it. I’ve gone on the ultimate field trip. I put in my ~30 hours of travel time, attended (and spoke at, what the fuck?) my first national conference, talked to a million and one different kinds of activists, watched a naked man dance to what I swear was a 12-minute Britney Spears remix at a gay club in Minneapolis, stood on a picket line, heard a lot of really strange Katy Perry stories, and got drunk on the roof of Chicago’s last squat. And now here I am, back home in DC eating hummus in my kitchen at 3 in the morning. And so, the test: what have I learned?

It’s hard to say. The things I’ve learned seem impossible to list. Everything I try to name sounds inaccurate or irrelevant, and it’s probably because I’m shooting to articulate the way-more-intangible concept of ‘What I’ve Experienced.’ Because this conference – as well as the time directly surrounding it – has been more than politics and TweetDeck and open bars.

When this conference was first pitched to me, it was summarized as something along the lines of ‘a conference for progressive organizations that use blogging/social networking sites as a primary means of outreach.’ For some reason I heard this and understood it as ‘people who Google ‘lesbian sex’ and end up on Autostraddle.com.’

I mean, okay, maybe I didn’t get on that train of thought and ride it all the way to the end, but I did assume (or hope) that this conference was going to be something of an experience neatly tailored ‘for me.’ 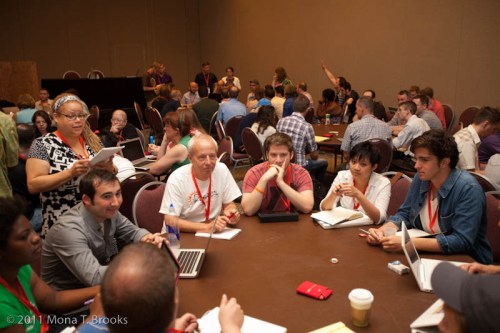 Look at this fucking photo.

But no, really, look at this fucking photo. I mean, I feel like I’m showing you vacation slides, but this photo was taken at the first workshop I attended, an LGBT strategy session for individuals involved in policy and the bloggers who covered them. At this table were writers and editors from Bilerico, Feministing, The New Gay, Death and Taxes, and a mainstream newspaper from Minneapolis all participating in a discussion moderated by Pam Spaulding.

But this conference wasn’t ‘for’ us. Nor was it obligated to be. I ran into individuals I met at this session at almost every workshop I attended (and basically all of them at the gay bar on Saturday night). We regarded each other as peers, as co-workers in the big, intangible company that is the Internet. But in most sessions I found myself out of place – the blogger among organizers, the lesbian writer among political analysts. It’s not to say that I felt disregarded or disrespected. It may have been all the open bars, but I didn’t meet anyone this past weekend who wasn’t interested in trading issues, discussing tactics, or at least figuring out what there was to do at night.

But a larger question exists. In a conference that centered largely around taking back America by empowering the working and middle classes, where do LGBT issues fit in, and how do we contribute? 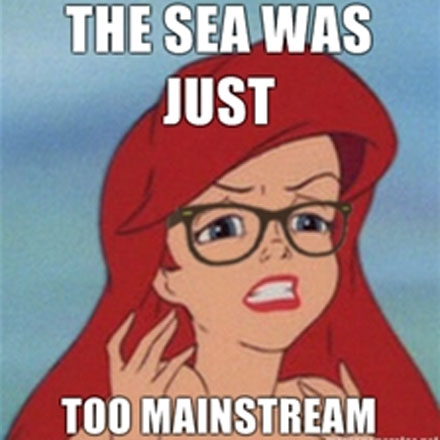 Drowning in a sea of mainstream media

The Little Mermaid’s got it right, you guys. Subverting the mainstream isn’t just for hipsters anymore. Our media is here, it’s queer (sometimes), and we’re trying to get it to move beyond being ‘just’ a niche subject. In meeting progressives outside the LGBT community, I was constantly challenged with how to present Autostraddle as more than ‘a lesbian blog,’ how to make it feel relevant to the people I was talking to. Because, dammit, it is. We’re part of the conversation, we deserve that.

As queer bloggers (and readers of queer blogs) we come from a small/large/continually expanding universe in which everybody knows everybody, but not everybody outside knows us. We are bloggers and journalists, yes. But we are also immigrants and are people of color, we are workers (and we’re also the unemployed). We’re the little guy/girl/persyn whose rights are determined every day by the people in power, people who are not us.

For those of us who want to see ourselves represented and included in the media, for those of us who want to affirm that we have a voice and that, yes, we exist, the time has come for us to take matters into our own hands and demand representation for ourselves. And we do this differently. As I mentioned in my last post, there were a lot of homos at this conference. But, seemingly, only a small percentage of us were actively and primarily involved in what is regarded as alternative queer media.

There is an argument that can be made that all queer media is, by nature, alternative. And in a way, that’s true. Because, yes, it’s an ‘alternative’ to heterosexual culture, a difference that’s inherent in all of us, in the way we grew up and exist. But to truly capture the nature of alternative culture, we also have to focus on the lives and experiences and voices of marginalized groups and people within our community who find themselves underrepresented, and therefore silenced.

To me, alternative means recognizing the diversity that exists within our community while recognizing that we are still part of a larger community (and calling for that larger community to recognize us). It’s understanding that race, class, and privilege deeply impact all of our experiences. It is not drawing a dichotomy of alternative vs. mainstream media or regarding ‘their’ media and ‘our’ media as mutually exclusive.

It’s true: it’s hard to feel included in mainstream media. ‘Alternative’ is not an unprompted movement, its a reaction to exclusion. As Heidi Barton Stink, panelist on Queer Media and the Alternative Revolution, pointed out, organizations and media outlets will inevitably fail to be entirely inclusive, and when communities exist that don’t speak to you, there is sometimes no way to make yourself feel included. Sometimes you can ‘t build on communities and spaces that were not built to include you. Sometimes you have to create a space for your own voice.

So how to reconcile these things? 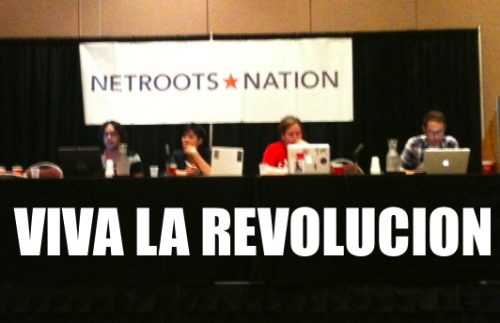 In our panel, we discussed a cultural phenomenon known as the ‘post-gay’ identity, an identity that assumes that the ‘gay community’ has moved ‘beyond the closet,’ therefore making race, class, and gender equity that much more accessible. Post-gay sort of assumes that because we’re living in a society that’s becoming slowly but steadily more tolerant toward gays and lesbians, we have no more obstacles to overcome. Post-gay expects that women feel safe and welcome in spaces that have traditionally belonged to men. It believes that ‘mixed’ atmospheres can occur organically just because we’ve eliminated the necessity of the closet. ‘Post-gay’ is insistent on moving past struggle.

But the struggle continues. Because we’re not post-gay. We’re not post-anything, except maybe post-WWII or post-90s boy-band phenomena, both of which are fine. The LGBT community has the power to become a huge moving force in the progressive community. Why? Because we’re fucking everywhere (I mean that in every sense).

If there’s anything I’ve ‘learned’ from my experience at Netroots, it’s that the LGBT community’s got something down that everyone is finally catching on to: the fact that you can create real, meaningful community online. We have proven time and time again that we are people armed: not just with knowledge, but with community. We’ve got backup. We’re here for each other in the closets, in the streets, and online. And we can use these tools that we have to build our community and to integrate (not assimilate, there’s a difference!) into other communities who also experience a systematic deprivation of rights and liberties. Communities that are silent and separated. We know the power that the Internet has. It lets us know we’re not alone in our struggle, no matter how alienated we feel in our physical communities. Physical meeting spots were always important, they still are. But now we can reach a wider audience and create many centers of physical force. We can empower far more people and ultimately build a more intricate web of activists, artists, and thinkers. This power is ours to keep, but it’s also ours to share.

And what can the progressive community do for us?

They can recognize our passion and our power and regard us as more than tokens, as individuals, and as a cause. And we can do each other the mutual favor of learning to regard each other as allies. Last Friday, keynote speaker Van Jones discussed the baseless power of the Tea Party. Is the Tea Party a huge, scary coalition of right-wing conservatives and a snake that doesn’t want to get tread upon? Yes. But Jones pointed out something important: the Tea Party doesn’t exist. There’s no headquarters, there’s no president, there’s no physical space. But us? The queers? The progressives? We got it. We’re real. We’re online, we’re in the streets, we’re everywhere. And, goddammit, we’re on our way.