The MacArthur Foundation awarded lesbian cartoonist Alison Bechdel one of its coveted Genius Grants. The only requirement of the $625,000 award is that Bechdel and the 20 other recipients continue doing the good work they were already doing.

So, hopefully this means Bechdel will continue doing revolutionary work related to film, family and culture. Her name was on everyone’s lips starting last year as her 30-year-old film test re-entered mainstream conversation. The Rule was born from a 1985 strip of her comic Dykes To Watch Out For. 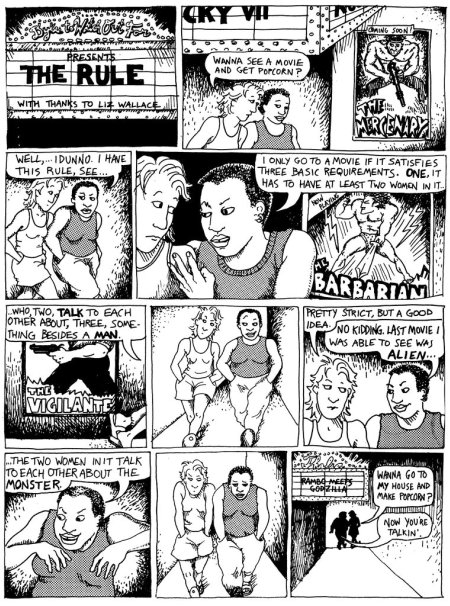 The rule, now known as the Bechdel Test, calls for basic inclusion of women in film. The concept shouldn’t be so revolutionary, but when women had only 30 percent of speaking roles and 15 percent of leads in last year’s top films it is clear we have a lot of work left to do. It’s great to see the MacArthur Foundation honoring someone doing that work.

Bechdel has also earned well-deserved praise for graphic novels including 2006’s Fun Home and and 2012’s Are You My Mother. In August, it was announced that the stage production of Fun Home is officially headed to Broadway after years as a beloved Off-Broadway experience.

Some of the other winners are pretty cool too — Mary Bonauto, the director of the Civil Rights Project for Gay & Lesbian Advocates & Defenders also won a grant. Then there’s Pamela Long, the 71-year-old who pursues research on medieval history without a university affiliation, and Terrence Hayes, whose poems on race, politics and love are some of the most powerful words being written today.

The winners are doing their work from around the world — Bechdel, for example, is on an artists’s residency in an Italian castle. Although it took 30 years for Bechdel’s simple, brilliant ideas to reach this level of recognition, with this new recognition and funding she’ll be able to continue moving the conversation and stealing our hearts.