My relationship was crumbling and I knew I wanted out. She always said things to purposefully hurt me, she was elated or sad by turns that I could never predict. My writing wasn’t really a thing that mattered, when I sat down to work on a piece I was doing nothing, according to her. My friends were busy people, and almost none of them were gay and none of them had dealt with a person like this before. I didn’t know where my community was, who I could process these feelings with.One of the only queer people I was friends with was… my girlfriend. The girlfriend I knew I would have to leave and who I was struggling to leave in better condition than when I got there. I was broke, supporting myself and paying my girlfriend’s student loans on not very much per hour. I would stress eat and I was getting soft and feeling bad in my body. My writing was suffering. I felt isolated. And I always felt so torn– I didn’t think she was doing it on purpose, but at the same time I could tell she was. So when I found out about Lava, my mother registered me and paid for the session. “Honey, it just seems like you need it right now,” she said as she patted me on the back while I cried over the chocolate chip cookies we were attempting to bake.

I am sad. I am stuck. If I leave, she’ll implode. She won’t get out of bed every morning. She’ll self-destruct. I’m afraid. It will be hard. I can’t afford to live on my own. Better the devil you know than the devil you don’t. I probably deserved that.

And a bit of background about Lava: Lava is an all-female performance troupe fusing theatre, dance and acrobatics. Perhaps because of this fusion and because Sarah East Johnson, the founder and artistic director, used to perform with Circus Amok (and will again this September), Lava is often thought of as circus. They’re listed on the Circus NYC directory. Maybe it’s also the trapeze that does it. For whatever reason, I am certainly not the only one that calls it circus. But they’re a special brand, something a little different. Maybe I should just call them Lava. 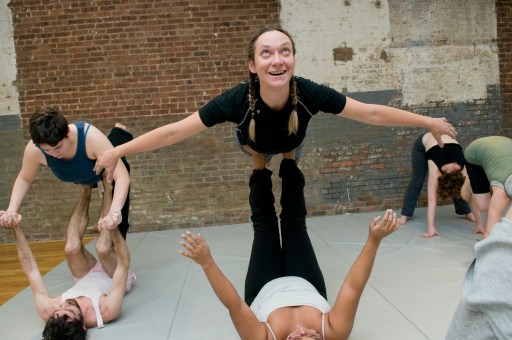 A bit of background on me: I love theatre. I love dance. But when I took ballet classes way back in elementary school, I managed to knock over the entire class on open house night, the night where all the parents came to watch.  So ballet lasted only until Miss Mary Ann said that no matter what I did, my butt would always stick out because it was bigger than everyone else’s. In college, I studied to be an actor, but grew fed up when whatever skill I had didn’t seem to outweigh the body I had. I realized I was offered more and better roles when I dropped down to 130 pounds (I am five feet, ten inches) due to anorexia. It was after that I declared, “Fuck this, I’ll be a writer. Now give me that sandwich and yes, I’ll have dessert, I’m fucking hungry. I haven’t eaten in two years.” My senior year, I took a Creative Writing class and fell in love with fiction. I haven’t stepped foot on a stage since– my last production was the Vagina Monologues. (The one who only does sex work with women.) In short, I didn’t think I could really do anything related to dance or theatre ever again.

I am weak. I am so, so weak. I can spin a yarn, but I can’t spin in physical space without falling face first into the barre at a ballet studio. What I want to do doesn’t matter because I won’t be good at it.

For the first three months, my instructor, Molly, had to haul me up by my ankles to get me into a hand stand. I was terrible. I would get winded just by warming up. I was scared to do, oh, everything. But I loved it. I met friends that were queer (put an all-female group in Brooklyn and you attract queers like fruit flies to overripe bananas), friends that would cheer me on when I made the tiniest improvement, like going from someone putting me in a handstand to actually trying. Or the smallest reduction of noise while I was doing a forward roll, just a tiny bit less of a thwap. My entire body was sore every day of the week, the deep, good kind of sore that let’s you know you did work.  A few classes in, I left my girlfriend. I was crying in my car after some terrible things she’d said. And I looked through my windshield at the suburban hell around me, this run down apartment I was parked in front of, that I lived in with her and that never felt like home. And I basically did what I did when I gave up acting. “Fuck this. I deserve better. I’m leaving.” I called my father and he said to bring what I needed for a few days and pack up the cat, we’d go get the rest of my stuff soon. And I drove to South Jersey that night.

I still commuted to Brooklyn for class, from South Jersey. The first time I kicked my feet up high enough to get into a handstand without help, I ran around the studio flapping my arms like a bird. The first time I successfully dove through a hoop, I did a jig on the other side. I got hurt twice in quick succession- my dishwasher broke and cut my hand up pretty good, and I severely bruised my foot in class shortly after (I hit the brick wall with it.) But I couldn’t stop going. I began to gain particular satisfaction from being a base (the person holding other people up). And when I said I couldn’t do something, I was the worst in the class, I wasn’t good enough, my classmate Emily always replied back “You have to change your mantra.” And she’s right. And I say those things about myself to myself less and less each day. When I give my Lava schedule to my day job, I tell them “It’s either this or therapy and this is cheaper for me than therapy.” Basically, Lava gets me through my week. It’s usually my high point. 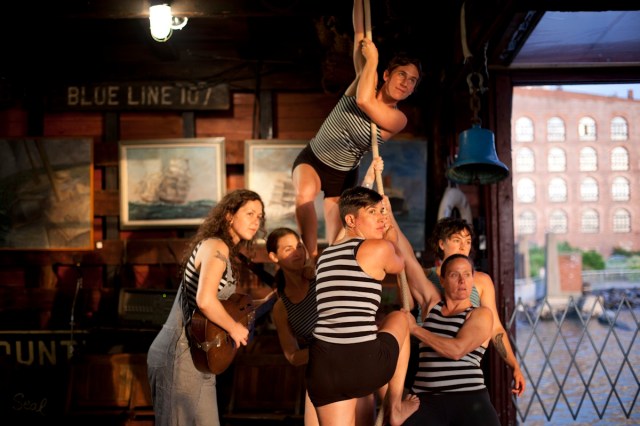 There is no better feeling than knowing you can’t do something, just knowing it to the core, and then surprising yourself because you can. And yes, when I am soaring through a hoop and landing on my hands, doing a forward roll on the other side, feeling my spine curve into the mat, that is physical strength. I have physically become stronger due to Lava, a place that celebrates female strength and all the forms it comes in, all the different bodies it comes in. And that’s important. But changing your mantra, surprising yourself, doing things you never knew you could, having the strength to leave a very sour relationship– that’s a different kind of strength. It comes from this: if I knew I couldn’t do it and I did it anyway, what is impossible anymore?

I thought I knew why I liked being a base so much. I thought it was because I felt strong, solid, grounded when I had a person on my shoulders, feet, thighs, back. Those are all wonderful things to feel, after all. But I didn’t put my finger on it until Sarah sent a letter out to the whole Lava community. I don’t still have the letter, I’m sorry I lost it. But if I were to paraphrase, she mused about how people always commented on her strength. It looks like you could take someone, it looks like you could beat someone up. And she always wondered why people equated strength with violence. Hell, I had. My girlfriend’s temper was more violent than mine, so she was stronger. But at Lava, Sarah said, strength came from holding people up, from supporting others. And that’s when I knew. I liked holding people up that held me up when I needed it.

I am strong. I am important. I can complete hard tasks. I can practice. I can learn. I can learn to be graceful. It’s okay when things look hard as I try them. If I fall, no one will judge me. People trust me. People like me. I am worth being supported. I am able to support others. I am strong enough to hold people up.

If you’re within striking distance of Brooklyn, come join us this Fall. Come ride on the balls of my feet, feel weightless, feel supported. Especially if you think you couldn’t possibly do it. And who knows. Lava might save you too.

Lava is focusing their energy this season on the Brooklyn Academy of Music (BAM) Professional Development Program in which they’re participating, which means they’ll debut a new piece at BAM’s new Fisher Theatre in June of 2013. To gear up, they’re having a benefit on October 22nd at Roulette in Brooklyn to cover the costs of the production and to pay the artists! Keep checking their website for forthcoming details.

Please join LAVA and some of Brooklyn’s finest musicians, including Mamie Minch, Chris Cochrane, and The Handsome Man Band, for a unique and very special event at Roulette on October 22nd.  Original movement pieces created for this rare event, accompanied by live music, will be performed by LAVA company members. Live music and dancing for all will continue after the performances, followed by a live auction hosted by the notorious comedian, Reno.  Auction items will include private lessons with LAVA company members, house stays in Sag Harbor and the Hudson Valley, and your own serenade by these musicians at a time and location of your choosing.  Food will be provided by renowned chef Gabrielle Hamilton of Prune, and several of Brooklyn’s own artisanal food purveyors including Bite Size Kitchen and Kumquat Cupcakery.  This will be a one-time only event and is not to be missed.