It’s astonishing to think it’s been over three years since we saw Mel and Sue presiding over The Great British Bake-Off, gently cajoling all-comers to the iconic tent and lacing every comment with eyebrow-twerking innuendo, before their morals got the better of them, bowing out when the show jumped channels.

Barring a poorly-received reboot of The Generation Game, it looked like Mel and Sue were struggling to find a vehicle for their much-loved partnership until news broke that they would be starring in Sky One’s Hitmen as a pair of… hitmen? Don’t worry, this is not a case of the duo distancing themselves from their light entertainment roots by pivoting to the most extreme opposite like a pair of ex-Disney stars with a point to prove. Hitmen is exactly what you would expect to see if you imagined Mel and Sue as a pair of contract killers, which is to say there’s not much emphasis on the killing, and an awful lot of faffing around being silly.

Indeed, with a high focus on the banter between the two, it’s perhaps only the absence of Sue’s trademark lesbian blazer and Mel’s trademark not-lesbian blazer that nudges our subconscious to remember they’re not being national treasures Mel and Sue, but mercenary murderers Jamie and Fran. Fran (Sue) is the slightly more serious and smarter of the pair, but only compared to Jamie (Mel) whose bumbling presence is guaranteed to unwittingly sabotage every sketchily-laid assassination plan.

One thing is for sure: a series of slippery victims and surprisingly endearing side-characters is not getting in the way of Fran and Jamie living their best #vanlife in a beat-up yellow Transit, with an unusual array of manacles bolted to the floor and a permanent patina of blood splatter that must be a right bugger to clean. 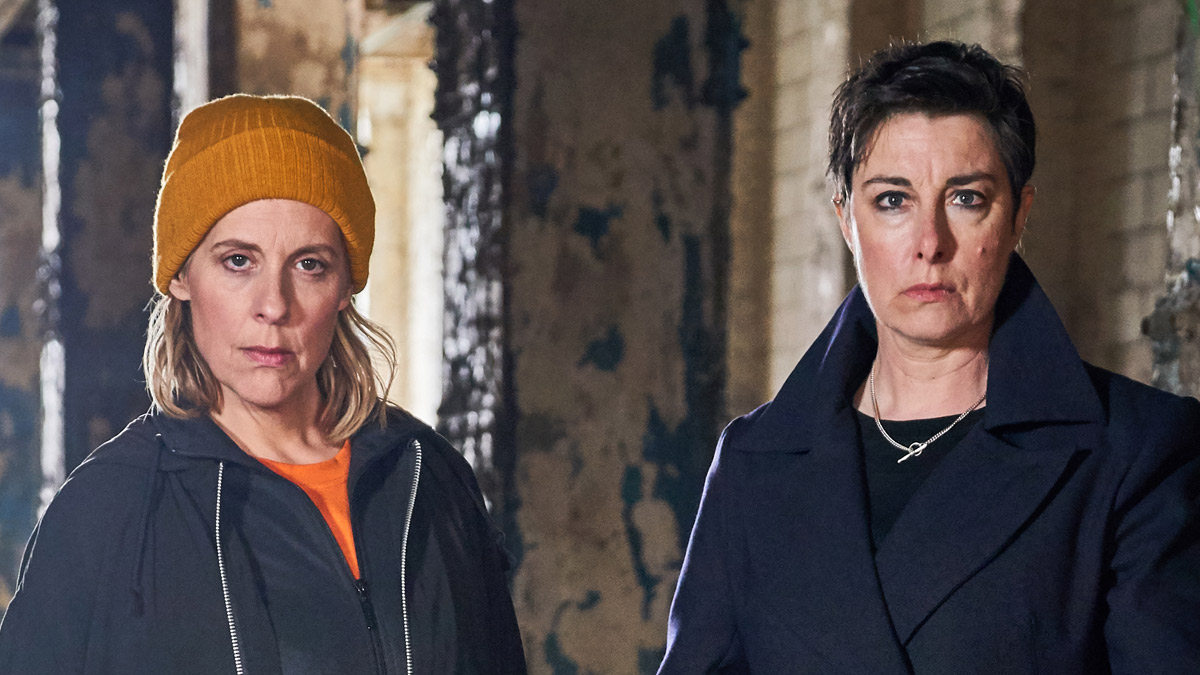 Most of the six episodes follow a similar formula: Fran and Jamie acquire their target, who gets a temporary reprieve from their fate thanks to the extreme incompetence and distractibility of our less-than-deadly duo. Antics ensue, and against all expectations the women get the job done.

Each of their targets has in some way pissed off Fran and Jamie’s boss: the ominous Mr K, a shady crime lord who’s racked up more enemies than season six Jenny Schecter. In fact, there are so many n’er-do-wells needing to be bumped off that Fran and Jamie are not the only hired guns in town. The pair frequently run into arch rivals and frenemies Liz and Charles, who seem the height of professionalism with their jet black van full of slick tech and an arsenal to please the most ardent prepper.

Fran’s crush on the snarling Liz is a highlight, and the pair hate-flirt their way through the season, when Fran can actually get any words out that is. Fran’s queerness is never in doubt and gets plenty of air-time as both her and Jamie’s personal lives perpetually interrupt their day job.

Much like the killing capabilities of our hapless duo, the humour can be a bit hit and miss. Each episode’s setup is ridiculous without quite veering into the surreal, where some elements are winners (e.g. Fran getting inducted into a Brownie troupe in the woods) and others stinkers (a rabid dog preventing the capture of a coked-up wedding DJ). There are just enough laughs to balance out the duds and, as someone with a very low cringe comedy threshold, nothing ever felt spasm-inducingly awkward.

Violence is kept to a minimum and is definitely treated a lot more seriously than the capers leading up to it, which only serves to make it more jarring and incite serious head-scratching over how on earth Fran and Jamie got into this unusual line of work in the first place. We establish they’ve been best pals since childhood and the ease with which Mel and Sue fall into their petty bickering makes it all the most surprising that the show wasn’t written by or for them. This is not necessarily a bad thing considering the excruciating disaster of Sue’s first foray into sitcom-land, Heading Out.

The final episode (probably the strongest of the bunch), leaves things open for a second season which, based on this initial outing, I would welcome even if we weren’t living in a time of desperate media consumption. After all, it’s Mel and Sue; not quite as you’d expect them, but a tonic all the same.

Hitmen airs Wednesdays on Sky One. All episodes available on Sky Box Sets or Now TV in the UK. US broadcast details yet to be announced.

Sally has written 52 articles for us.