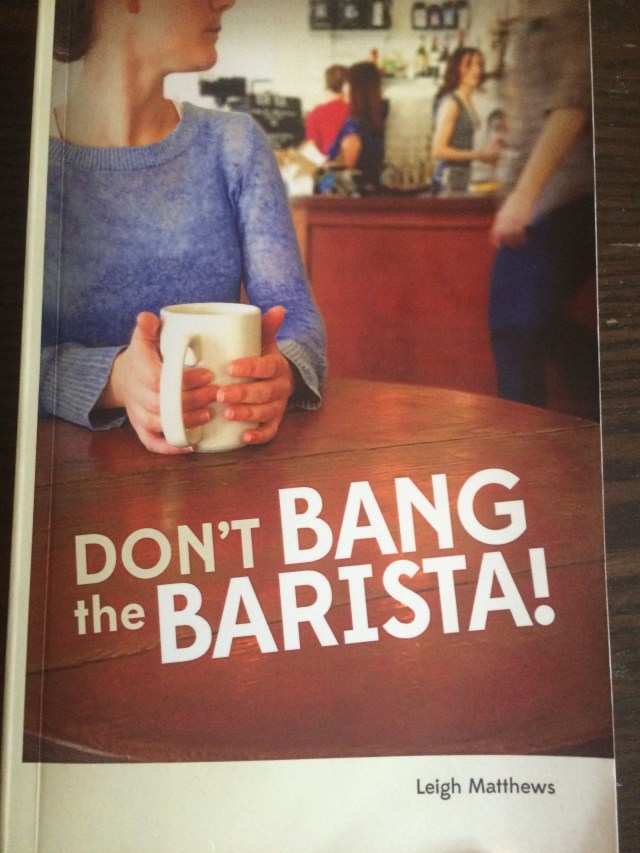 Looking for a readable stocking stuffer for a dear queer or gal pal? Don’t Bang the Barista! is a good bet. It’s a fun, contemporary pulp novel full of drama, crush-worthy girls, and Vancouver subculture.

Kate is a 30-something web designer living in Vancouver and embedded in a queer social circle. She’s crushing on the barista at her favorite coffee shop, but Cass, her bad-girl friend from the dog park, warns her away. (“Kate, honey, you know the first rule of coffee-shop dating…”) But Kate and the barista, Hanna, are intrigued by each other despite the warning. It doesn’t help that Kate’s ex-girlfriend, who she hasn’t quite managed to get over, is back in town and equally interested in reuniting. But could Cass, the supposedly carefree libertine, be holding a candle for Kate? And why can’t Kate stop thinking about her?

Much of the novel’s glee is found in its witty characters, who embody a real sense of “scene.” They partake in Meetup groups, play in bands, knit, and date each other’s exes. There are Kate’s couple-friends, trying to settle into domesticity but fighting like cats and dogs. There’s the bisexual best friend, Em, who Kate looks to as a model of stability, and who suddenly needs support in opening up her opposite-sex relationship. Em’s is a unique subplot that deals with biphobia, poly dating, and changing expectations in relationships. I was really glad to see it in there, as it’s a reality that could use more representation in the book world. As for the protagonists, Cass often behaves like a jerk, and snarky, depressive Kate can be a bit of a mess. Not every reader will approve of their decisions or find their romance believable. There were times I wanted to shake Cass, and yell “Stop doing that!” or “Just communicate already!” But as someone who’s messed up just as badly, and been just as much of a jerk, I also kind of empathized. These characters are as real in their vices as the women in, say, Valencia. Animals also get their stage time: Kate’s omnipresent dog, Jupiter, is a likable character in his own right.

While there are soap-opera touches, such as Kate getting embroiled with one girl one day and another girl the next, there are also flashes of insight that elevate the novel beyond a typical romance. Kate, a British expat, has witty takes on everything from accents — “Yeah, it’s totally sexy not to have any clue what someone is saying to you” — to  the relationship between pet ownership and procreation — “You can pretty much guess the age of the Labrador or Golden Retriever by how old the child is running alongside. A two year old toddler, huh? I bet you that dog is three, and a bit disgruntled.” Like any good drama, the plot’s resolution hinges on a series of improbable coincidences. However, there’s enough realism in the characters’ emotions and the minutiae of their lives to make these coincidences work. If smart, well-written theatrics are your thing, you’re in for a fun ride with Don’t Bang the Barista!

Join A+
Related:Hidden Gems of Queer Litnovelread a f-cking book