This is an except from a work in progress, “Eating Fire: My Life As A Lesbian Avenger” covering 20 years from Pat Buchanan’s Culture War to the War on Terror.

On September 9, 1992, the first day of school in New York City, I scrounged a token and took the subway out to Middle Village, Queens with my ex, Amy Parker. Most of the school district was racially mixed, with shops as likely to have Mexican tortillas as Turkish preserves, or cartons of kimchi. Middle Village, though, was a mostly white working class neighborhood that couldn’t boast much except a cemetery housing John Gotti and Lucky Luciano, and the Long Island Expressway.

We were the most interesting thing to happen there in ages. And while we would have made a splash if we’d come in black leather and raising our fists like the Black Panthers or ACT-UP, the Lesbian Avenger Concept Committee decided what we really needed was Souza. Souza, and pink balloons reading, “Ask about lesbian lives.” It was ridiculous, absurd, delightful though I wouldn’t have admitted it then.

Jenny Romaine, an artist Amy knew from Performance Studies, pulled together a brass band, kitting them out in the knee socks and plaid skirts of Catholic school uniforms. She herself carried a big bass drum. Some Avengers wore tee-shirts that read, “I was a lesbian child.” I turned one down, saying I couldn’t afford it, which I couldn’t, but refused even when Ana Simo, the mild-mannered Cuban playwright, offered me a discount. I still didn’t like the word lesbian. A few other Avengers were still shocked by the combination, even at the last minute warning, “They barely believe we exist. And to hint there are lesbian children. No. We’re provoking them.”

When we were all there, the sixty of us marched down Metropolitan Avenue to the elementary school, P.S. 87, singing at the top of our lungs, “Oh when the dykes, oh when the dykes, oh when the dykes come marching in.” We revised a few other Dixieland standards, and proclaimed, “We are family. I’ve got all my sisters with me.” One banner read, “Teach About Lesbian Lives” and another “The Lesbian Avengers.” Somebody clutched an enormous bunch of pink balloons reading “Ask About Lesbian Lives,” which had created a ruckus at the printer’s who kept misspelling l-e-s-b-i-a-n.

We were met with disbelief, anger, fear, a few approving nods, but mostly the typical New Yorker’s disinterest. Like them, I pretended I was totally cool with it. Hell, I did this kind of thing four or five times a week. No big deal. Like it was no big deal that when we got to the elementary school, the cops came with their thick blue arms and shiny shoes and tried to get us to leave.

At the civil disobedience training session, Maxine Wolfe explained it was perfectly legal to have a picket and hand out flyers. It was a public sidewalk for crying out loud. And she’d been doing demos since the ’60s, first for worker’s rights, then women, then people with AIDS. But then who knows what cops will do? Nothing, as it turned out. Maybe it was our unshakeable knowledge of our rights, or how we continued singing, handing out balloons, giving interviews, and flyers, while our negotiators negotiated with them. Or maybe they just took one look at this group of relatively innocuous females in knee socks and plaid skirts, and thought, “What the heck. It’s New York. Let’s go get donuts.”

More than one kid got their first lesson in the real world when an Avenger handed them a lavender balloon and their red-faced mother grabbed it away. No way is my little Sean or Antonio or Karen gonna be like that. As for the Xerox of our alternative alphabet –A for Acceptance, Action and W.H. Auden. B for James Baldwin, Rita Mae Brown, and boycotting bigotry — some got tucked into pockets, others pointedly ripped into shreds. Though not in front of me. I think I stayed with the other picketers tracing that tiny oval on the sidewalk and avoiding confrontation. Maybe I held a sign for a while, feeling goofy and embarrassed, as I always did, at so much emotion being displayed.

The weather was nice, anyway, one of those perfect fall days with dark blue skies and white fluffy clouds which did not send forth lightning bolts or hail, or anything at all to kill the lesbians. Nope, nobody died, there in front of the school yard. Neither were kids converted, or perverted, or particularly traumatized except when their angry moms grabbed their shiny balloons and let them float away. We just signaled to the world we existed. We’d been kids ourselves in school. The only thing different about us as adult lesbians were a few additional years. And self-awareness. Which was just beginning on my part.

Funny, I write that like it’s nothing. Just signaling to the world we existed. When it was like setting off a bomb. What else could it be? Lesbians plus elementary school children. We knew it was benign, but not them with their dirty minds. And it was one of the first (and last) times anybody dared confront them directly.

We left en masse when the last student entered the school. In those days, bigots would sometimes haunt queer demos, and when people broke off from the pack, grab a few stragglers and beat the crap out of them. So together, Avengers set off for their day jobs, or classes, or coffee shops. The media dykes went to send more press releases. And I remember at the next meeting, Maxine or Ana or somebody arrived triumphantly waving copies of Newsday and other rags that had covered the demo. We’d done it. We’d launched the Lesbian Avengers, and the city had taken note. 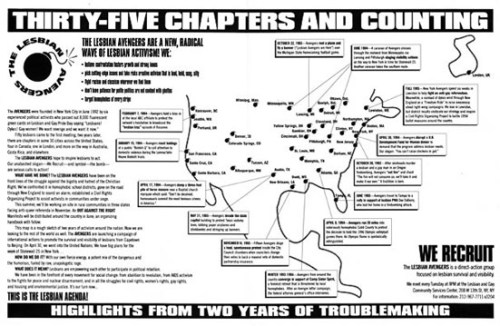 About the Author: Kelly Cogswell is an independent journalist and VJ specializing in society, culture, and politics. Former co-editor of The Gully online magazine offering “queer views on everything,” she’s been recognized by the New York Press Association for her column at New York’s Gay City News. She also directs the Lesbian Avenger Documentary Project.

For more on the Lesbian Avengers check out lesbianavengers.com.

Join A+
Related:gay history 101lesbian avengerslesbians they didn't teach you about in history classpersonal essay