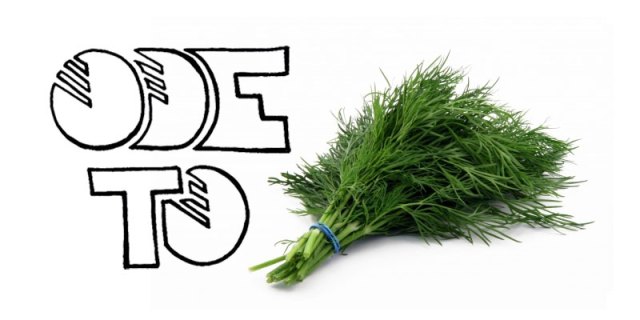 Dill is the one herb you can never get out of your mind because you can never get it out of your teeth. Sure, on a normal basis it’s easy to just avoid that flossing-foe, but if you’re paying attention to the Olympics via your stomach, you’ll soon realize that that herb is goddamn everywhere. While I can by no means tell you how to master borscht, coulibiac or okróshka, we can figure out whether that feathery flavour is friend or foe.

Even though it’s most often associated with Nordic cuisines, happy little Anethum graveolens‘s native to southwest Asia and India. Dill’s a member of the carrot family along with celery, coriander, fennel, lovage and parsley. In addition to sharing ancestors and being great stand-ins for terrifyingly complex faux-food appetizers, these culinary cousins share a bit more than botanical lineage. While the mint family is quite flashy with their essential oils, the carrot family’s a bit more demure. Mints’ll store their oil glands directly on their leaves to give predators — including us — an automatic whiff of their goods. On the shyer side of things, carrots store theirs within oil canals that run along their leaves’ veins. 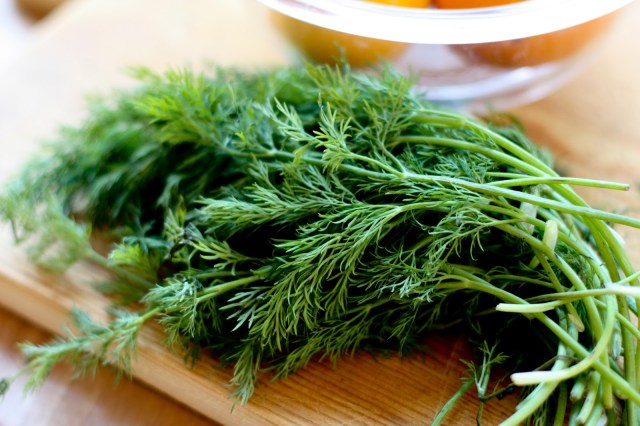 Okay fine, maybe the veins are too small to see, but you get the idea via Feasting at Home

What does that little anatomy lesson mean to you? If you want to get to the flavour, you’re going to have to do a bit of work, so finely chop fresh dill to release the oils. That sounds kinda sucky, so wanna know the lazy upside? Since the oils are somewhat protected within their leaves, drying doesn’t seem to do nearly as much damage to dill as it does to the mint family. Sure it won’t taste the same, but it’s an okay stand-in if you aren’t able to get the fresh stuff, just be sure to store it in the dark.

Just like Cousin Cilantro, you have plenty of options when it comes to eating this weed. The thin, fluffy, almost kelp-like leaves are the obvious culinary companion, but you can also attack the other bits. If you want a more pungent dill flavour, reach for the fruits (usually known as seeds) instead. In the spring you can get the benefit of the fresh leaves and pungent fruits by reaching for the dandelion-seed shaped dill heads. 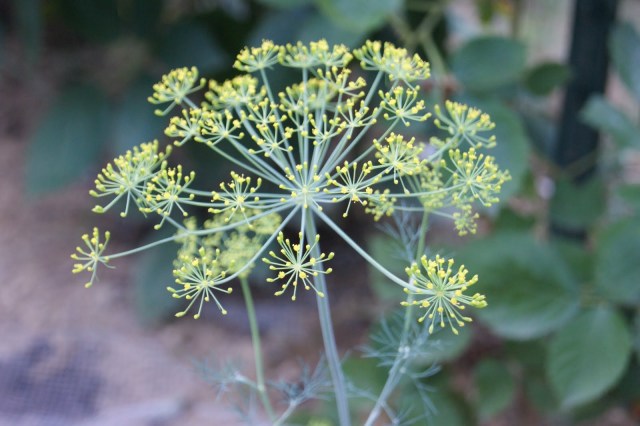 Dill’s grassy yet pungent yet citrus taste works best when its paired with ingredients that showcase its many flavour facets. Sure, you might have some luck with dill and pungent Parmesan, but it tends to do best in the culinary arena when it has allies rather than opponents in the ring.

Pickles flavoured with dill are as classic as peanuts paired with chocolate; they taste fantastic so everyone does it. Adding some dill weed to a batch of cucumbers is the obvious choice, but try reaching for a dill head for a prettier jar or a handful of seeds for a stronger infusion. Since they’re part of the same family, dilly carrots work phenomenally well, as do beans, garlic scapes and beets. 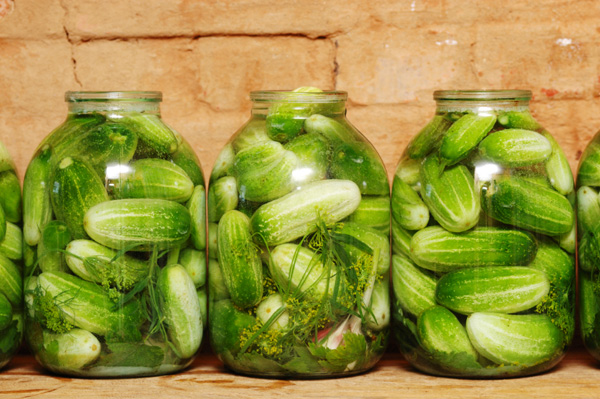 If you’re looking for a faster flavour fulfillment, just reach for some acid to go with your dill. Translate your dilly beans to a salad by using a lemon-based dressing. Try mixing some lemon juice and dill into your rice for a refreshing side dish. Or just throw a few handful of Dill Pickle chips in your face. Stop looking at me like that, I’m Canadian!

But fine, let’s go classic since dill does well when paired with creamy options. Got some yogurt and cucumbers? Well now you have tzatziki or mizeria or cacik. Mix it into cream or cottage cheese for a simple spread. Or turn those sulfurous hard-boiled eggs into a egg salad or deviled eggs. What about avocado, our favourite fatty fruit? Just whip in some dill for a vegan-friendly dressing. Or if you want to make life a whole lot easier make a dill butter that’s perfect with potatoes and that other obvious dill-partner. 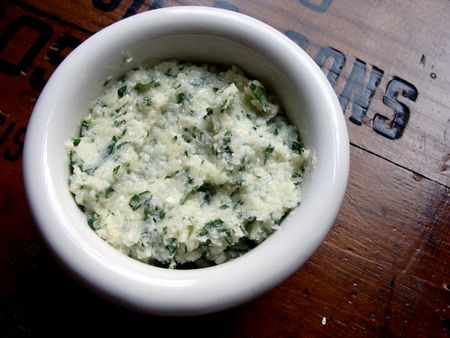 Dill loves seafood, straight up. Lemon dill salt was my childhood best friend and I still stuff my fish with a handful of sprigs before I toss it on the grill. You can brighten up tired canned tuna by adding some dill or dill pickles to your fish cakes or tuna salad. If you want to have some real fishy fun, reach for some oily or smoked fish. Cure a salmon fillet with sugar, salt and copious amounts of dill to make your own gravlax or go the full smoked route and pair your kippers with potatoes, apple and a dilly-spread for the perfect sandwich to accompany the games.