Issa Rae is a producer/writer/director/actress most known for the Shorty Award winning web series, The Misadventures of Awkward Black Girl. Rae has made the Forbes “30 Under 30” list, twice, and is currently developing a half-hour comedy for HBO. She’s also slated to release a book of essays next year. Additionally, Rae just launched Color Creative TV which aims to increase opportunities for women and minority TV writers by producing and packaging low-cost TV pilots with an indie sensibility. The three pilots from the first round of this initiative: Bleach, Words With Girls, and So Jaded are online now. 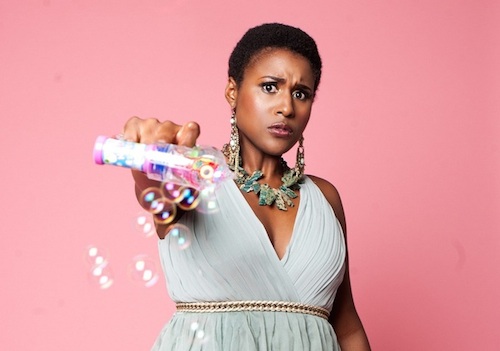 I’ve never seen True Detective but people keep talking about the casting decision of Colin Farrell and Vince Vaughn. If you were on that show, who would you want to play your fellow detective?

I really like True Detective. I’m sad that it’s just two white guys again, but I can live now that I know Rachel McAdams is in it. If I were on it, I’d want my partner to be Dave Chappelle. One of the detectives has to be cynical, bitter with life, and all-knowing to the secrets of the Illuminati, and Dave has all of that, coupled with vast, stoner intelligence. I need that.

What’s the fanciest food you eat on a regular basis?

It used to be smoked Fontina cheese with water crackers, but cheese has a vendetta against black people and old people, so I cut back. Now, the fanciest food I eat is from Blue Apron. I looooooooove Blue Apron. They introduce me to ingredients outside of my comfort zone of breakfast foods and they ration to give you the exact portions you need to make a meal, so my cabinet doesn’t look like an idiot with an entire bottle of coriander seeds that just sit there.

How old were you when you started to describe yourself as funny?

I haven’t called myself funny yet. I’ve seen other people do it, and they always get tested on the spot, like “You’re funny? Make me laugh, funnyperson.” And that kind of question would make me violent, in a way that’s not funny. But the first time I made my older brothers (who I think are the funniest males in the world) laugh (that was not at my expense), I was in 7th or 8th grade and I remember feeling like, “Hello. I have arrived.”

What’s the most unfortunate fashion choice you made in high school?

Showing up.
And we had to wear black, white and gold uniforms, but during our two free dress days (in four years), I still managed to fuck it up by wearing a yellow visor, backwards.

Groundhog Day or Coming to America?

That is suuuuuuuuuuuuuuuch a fucked up question. I have such a deep, personal connection to both movies. Coming to America shifted the tribal stereotypes about Africans living in America, where the stupid questions I got shifted from, “You’re African? Did you hunt lions?” to “You’re African? Are you a princess?” BUT, I’m going to go with the movie that I’ve watched the most and that goes to Groundhog Day. I quote Coming to America more in my everyday life (“ah-haaaaaa”), but Groundhog Day just makes me feel so much. Sometimes I pretend that I’m living the same day over and over again, and am genuinely disappointed to find that my irresponsible actions have consequences.