We live on the internet now. We flirt online, we buy our dog food online, we have virtual offices and virtual sex and virtual heart to hearts. When I went abroad a few years ago and purposefully didn’t get a data plan for my phone because I was trying to disconnect, the thing I missed most about home was hanging out on gchat with my friends who lived all over the world. I shared that thought with a friend when I got home and she seemed unsurprised. “When your friends are so spread out and the best way to talk to them is online, the internet becomes a physical space,” she typed to me. I think about that a lot. The internet as a physical space. All of us, in separate but connecting rooms, existing. 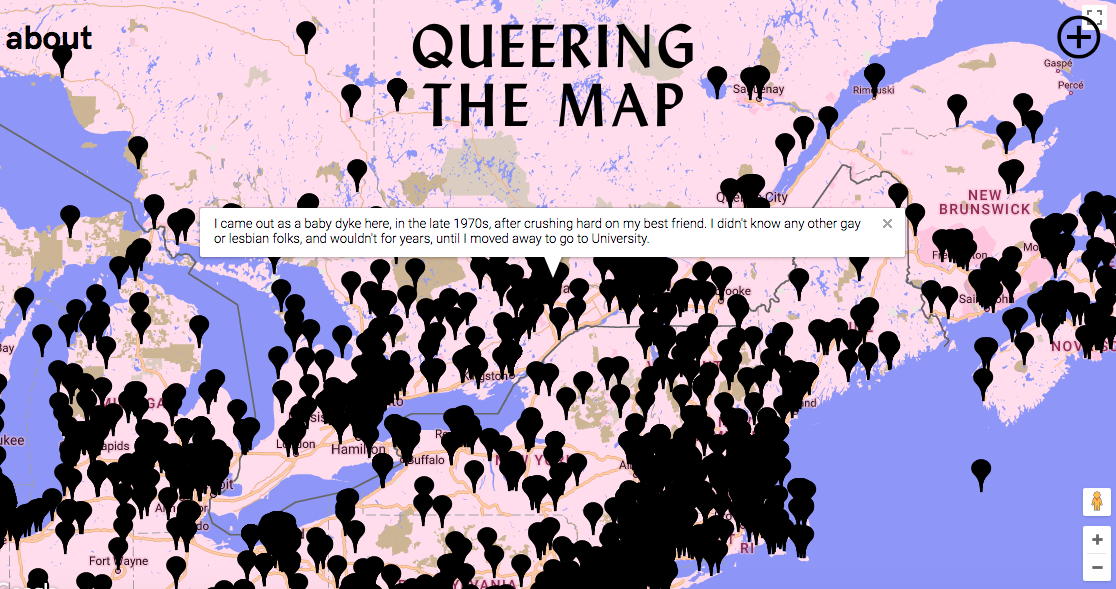 But we also live in the physical tangible “real” world, and we always have. “We” being humans, but for our purposes right now, I mean we as in queers. A lot of physical spaces that have been foundations of our queer history are disappearing now, and there’s a lot to mourn for sure. And yet – in the midst of this grieving for dedicated places, there is something to celebrate: the whole damn world has always been queer. As in, we’ve always lived in it, and we’ve always queered the places we exist in. You know what I mean. Close your eyes. Picture your big queer life. The living room sofa in your parents’ house where you watched Saturday Morning Cartoons and had a crush on Patty Mayonnaise. The narrow single bed where your first girlfriend straddled your stomach and whispered “I love you” and you thought you might pass out but instead you just smiled and smiled and smiled. The shelter where you and your now-ex adopted three cats. All the sweaty dance parties. The GSA classroom. That one specific shelf at the bookstore. That deli where she said “we’re over” that you can never go back to because it still makes you sad, seven years later. Can you see it all? Your whole life? Map it out, purposefully. Think of all the places in the world that are queer, simply because you stood there and were your whole true self, whether you were out or not. 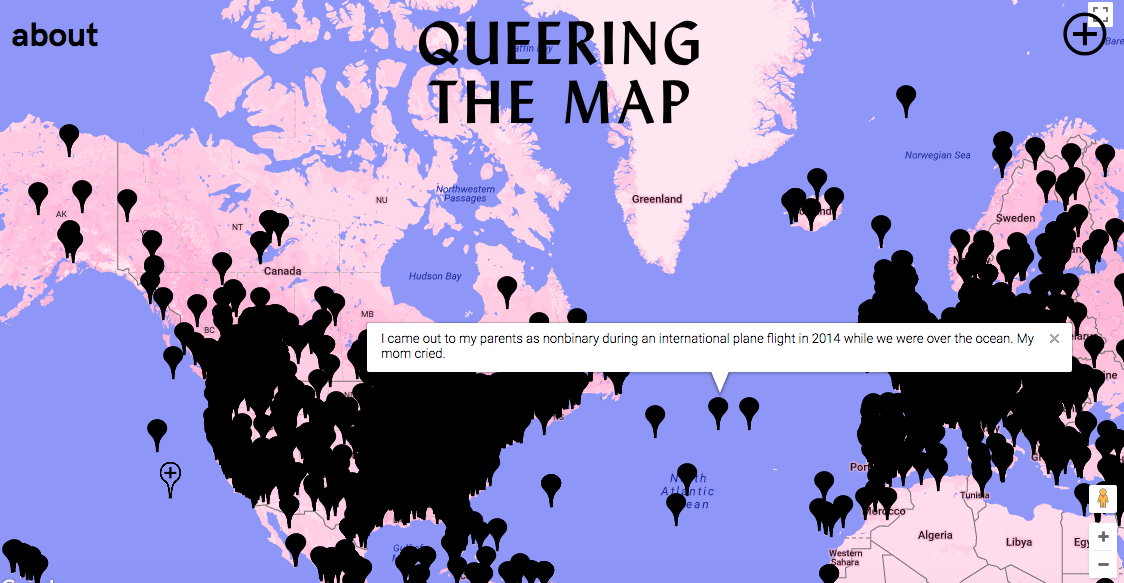 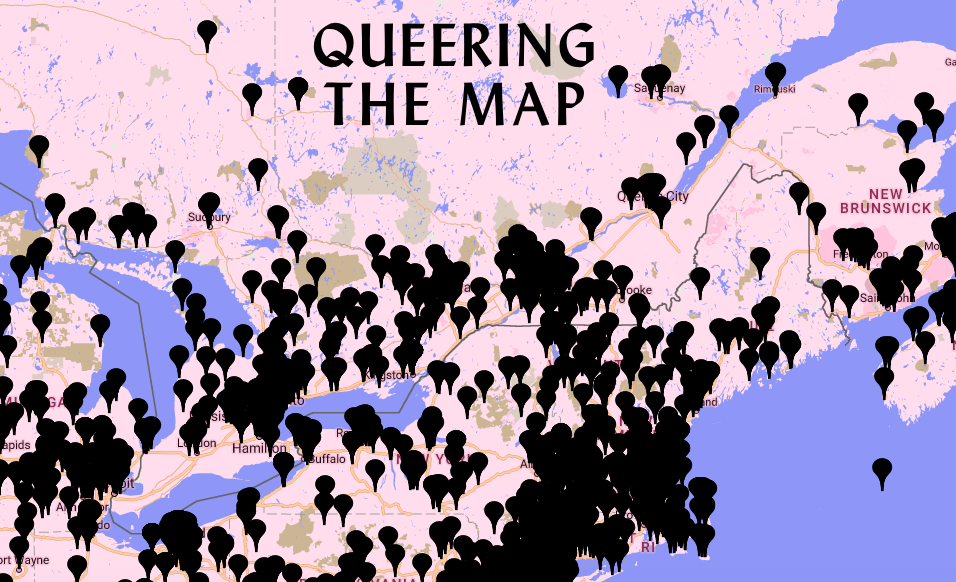 Then visit Queering The Map and start clicking around, and imagine no more. This project is real and alive, it exists on the internet and it reflects our lives in the earth realm, and it’s beautiful. It is a perfect combination of all the things that “queer space” means today. It celebrates our existence and our experiences, no matter how small, private, or seemingly insignificant. It visually demonstrates how vast queer space is. I love it so much, and I think you will, too. 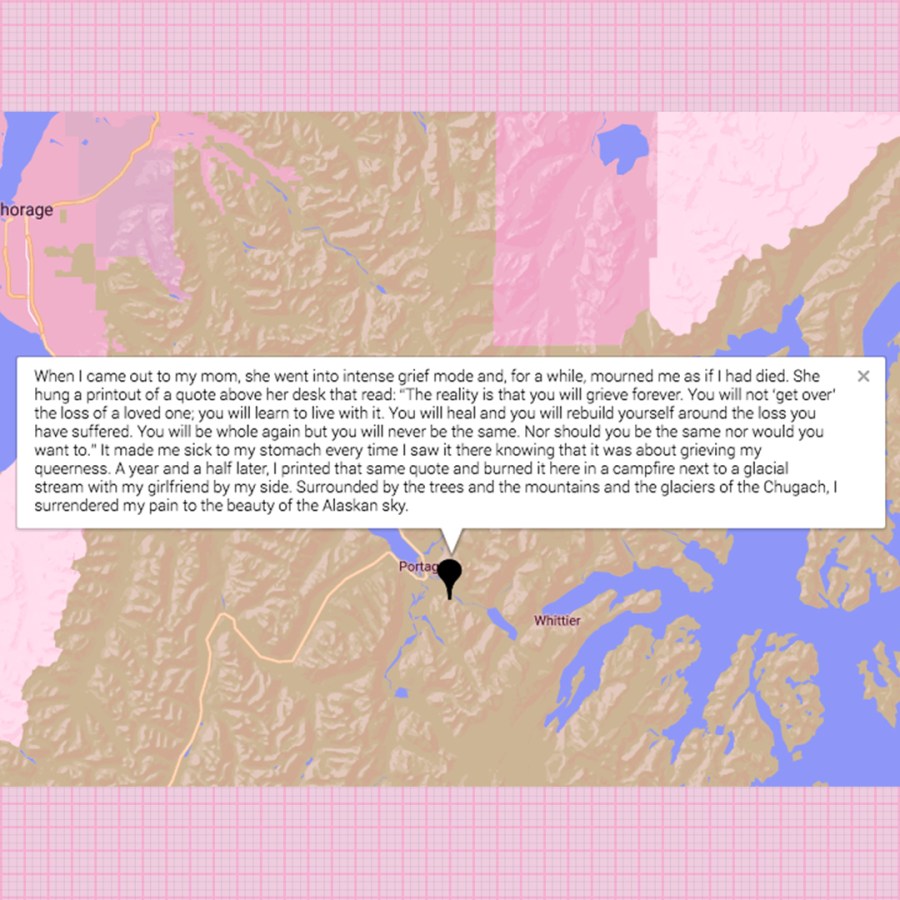 Queering The Map was born, according to its creator Lucas LaRochelle, “out of a desire to document the plurality of queer experience.” LaRochelle, a multidisciplinary designer based in Tio’tia:ke/Montreal, describes the project as a collective creation and prefers to focus on the collective voice of the work than centering their own. We chatted via email and when I asked how that collective voice functions, they described it like this: “[Queering The Map] operates from the perspective that queer existence is resistance, and aims to merge subjective experience into a collective voice. The aim of the project is to make legible memories, histories and moments of queerness that would otherwise disappear.” 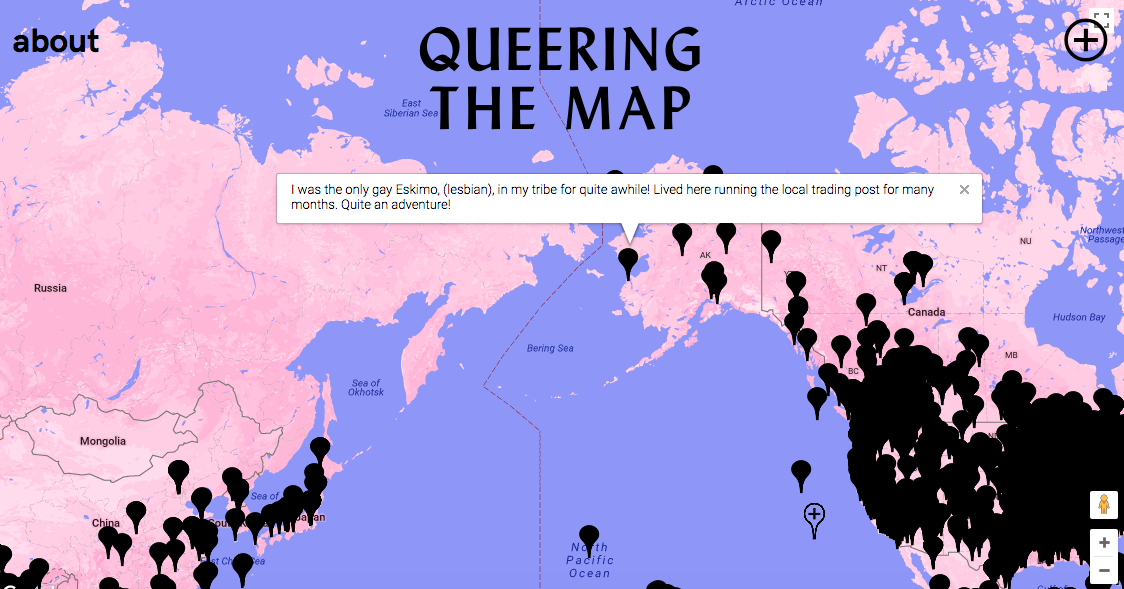 Several months ago, when the project was in its infancy, trolls landed on the map, threatening to curtail the project before it realized its full potential. This is a depressingly common reality on earth and also online. LaRochelle explained that on February 8th, “pop-ups began to appear on the site that read ‘Make America Great Donald Trump Best President,’ which were presumably posted by a bot.” They took the site down to deal with the issue, and put out a call for help. And, just as the existence of trolls is a given, queers coming to the rescue to save a thing they love and that is important to our history is a given, too. “Messages flooded in offering support,” LaRochelle wrote, “and a group of queer coders set up a GitHub in which to work on the code together to get the site up and running in a significantly more secure and sustainable manner.” 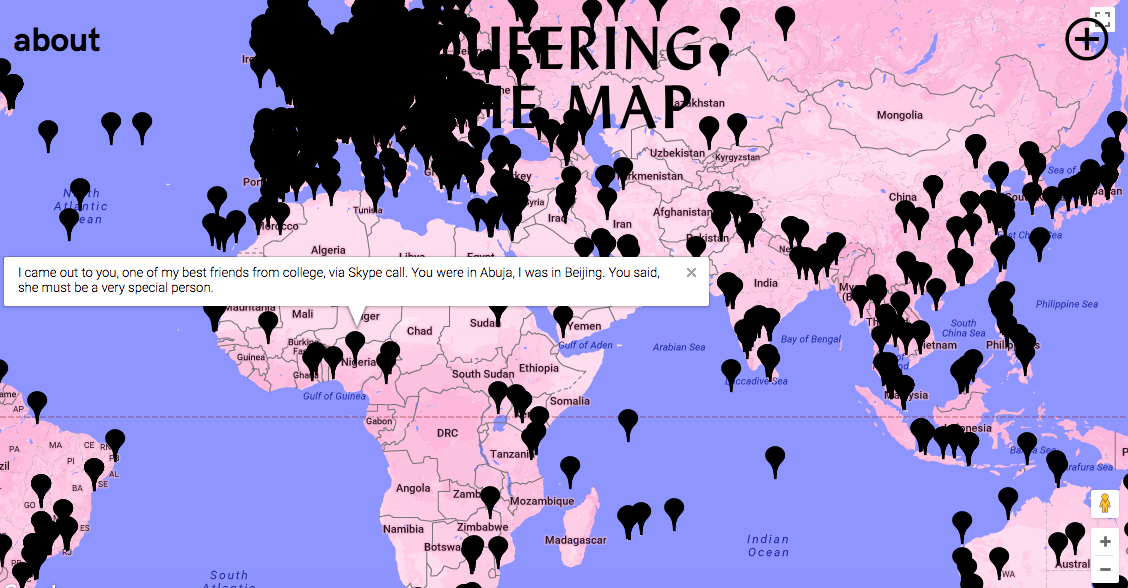 Queering The Map now has a moderator panel that is collaboratively reviewed to ensure that no hate, spam or unsafe content (such as addresses, phone numbers or peoples full names) makes it onto the site. Notably, the project qualified for Cloudflare’s Project Galileo initiative, which protects sites with marginalized content against being hacked. Queering The Map does not take any user data, such as a contributor’s location or email address, so as to keep everything posted to the site completely anonymous. 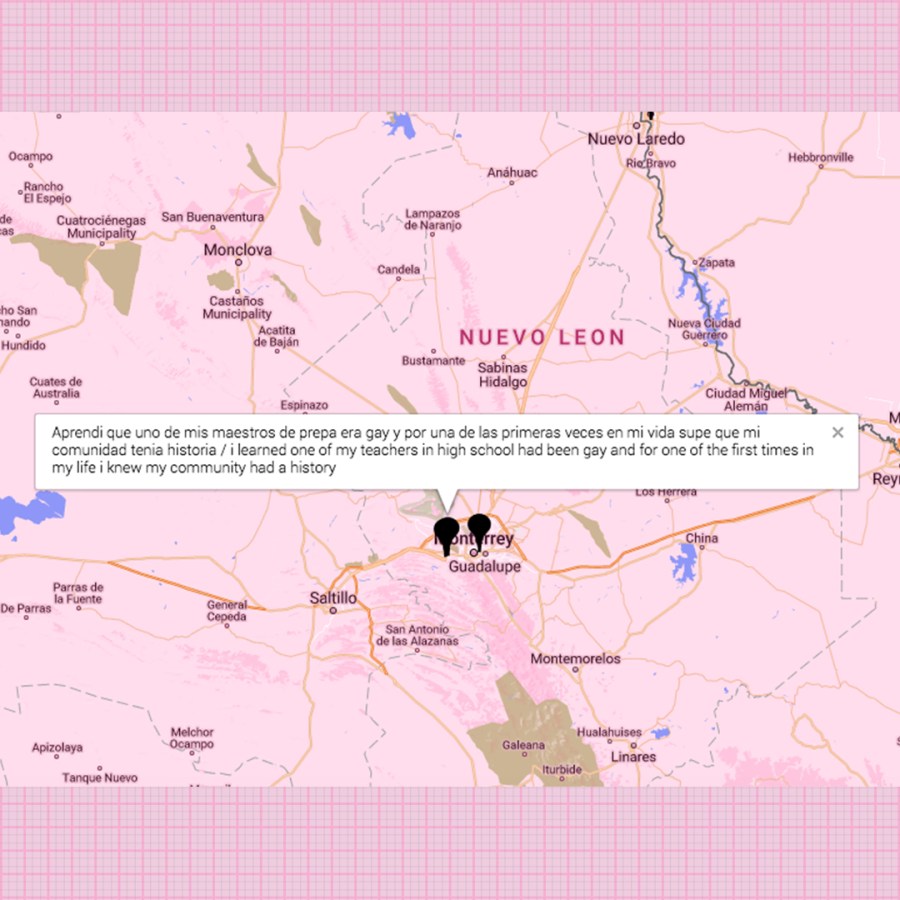 As an extremely nostalgic human being with a penchant for writing everything down lest I lose the memory, and as an extremely gay person with a penchant for being very very gay in every space I ever exist in, you can imagine how this project appeals to me. Perhaps it also appeals to you? If it does, head over to Queering The Map and submit your own queer space – and marvel at the fact that even just a few months after creating this project, the map is already so full. We really are everywhere, on line and in the tangible world, too. 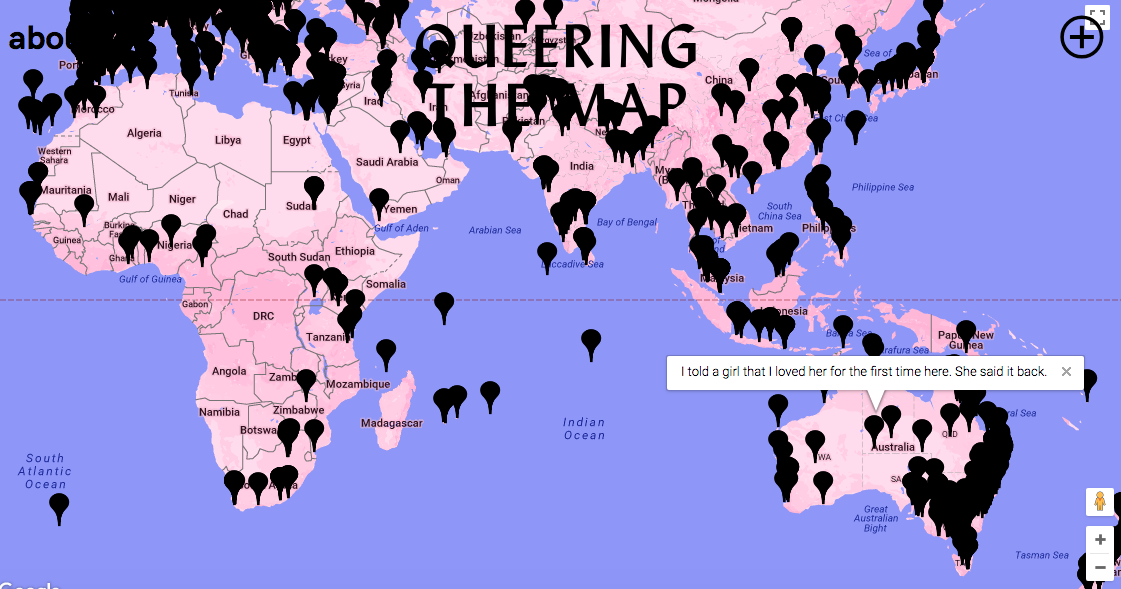