Google Instant debuted this week and various techno-savvy people have since weighed in on the pros and cons of the Real-Time Search Engine. I’m not one of those techno-savvy people. I’m just a girl with a website, standing in front of the internet, asking it to confirm my existence. And it’s not doing a very good job of it.

So, I’m no tech expert, but since launching Autostraddle in March 2009, I’ve learned a thing or two about Search Engine Optimization or “SEO.” (I’ve essentially concluded that SEO turns writing into science/math rather than art/journalism, and the more I know about it, the more appalled I am by how many sites actively cater to search engines rather than to readers. At Autostraddle, we do our best to choose the SEO tips that feel the most organic or authentic or less-like-a-compromise — for example,  if you’ve ever wondered why we stick “lesbian” or “gay” in so many headlines, this is why! (I wish “homogay” was a keyword.)

As my Google Web History/Big Brother Tracker reveals, I have conducted a shit-ton of searches over the last three years: 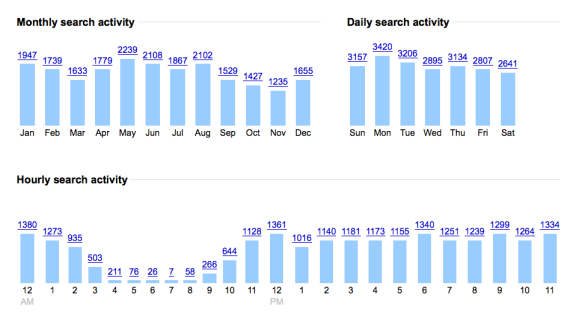 Google Knows When I Sleep

…. and consequently have found Google to be progressively less usable over time. Now that Search Engine Optimization is an actual career path and Google Adsense exists as a barrier-free income-obtaining vehicle, Google has been hijacked by content farms, which churn out massive amounts of content tailored to Google searches. This useless information, written by underqualified writers for low pay (ehow, suite101, helium, etc), as well as scraper sites, spamdexing and link farms, which employ other forms of SEO/keyword trickery to draw readers to useless AdSense-heavy sites, have come to dominate search engine results and pollute the web.

These days, using Google requires an internal system of mental cyber-gymnastics I’ve been carefully honing for nearly a decade and have been actively curating with attention bordering on obsessive since Autostraddle’s launch. Although I’m still in love with almost everything Google does — gmail! g-chat! google docs! picasa collages! — I’m no longer in love with its primary product, The Search Engine.

My relationship with Google.com is now analagous to the last few months before a breakup when you’ve become so adept at non-abrasive communication with your girlfriend that your fights feel more like well-choreographed dance routines than actual disagreements and subsequent problem-solving sessions.

I’ve found substitute image searches and specific work-arounds, and have culled a vast resource of bookmarked pages that get me closer to what I’m looking for than Google can [POST COMING ON THIS TOPIC LATER THIS WEEKEND].  Mostly, though, I’ve just tried to figure out how to communicate with Google in a language it recognizes, and I think that language is short-circuiting my brain.

After conducting some 10,000 searches within the last year I can say with confidence that Google is categorically unable to steer me towards what I’m looking for. This is especially evident on Saturdays, when I comb the web for material suited to Autostraddle’s Lesbian Sex-centric NSFW Sunday (which, btw, is chock-full of info and seems like a more logical first hit than ‘wetpussyteenagelickathon’) and find the internet totally unable to assist me in this endeavour.

This is, after all, why lesbians and bisexuals are left out of “instant search.” Queerty reports:

Google Instant has a weird and inconsistent approach to handling other queer terms. For example, they’ll serve up results on lesbian rights, lesbian film, and lesbian art, but only if you type in those words after entering lesbian — otherwise you get a blank page. They’re also OK with “fag” which yields fag jokes, fag bomb, and fag bash but not with “faggot.” And you’ll only get a blank page for “hate crime” even though they serve up links for “gay bash.”

That’s not to accuse Google of having an anti-lesbian or anti-bisexual bias (far from it), it just has an inconsistent and overly cautious search policy.

I have three major feelings about this:

Although “lesbian rights” and “lesbian film” are allegedly searchable, look at this fantastic search for “lesbian books”: 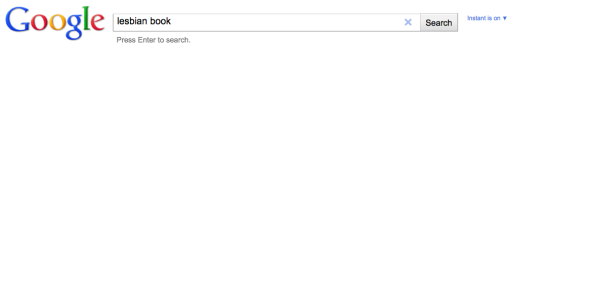 Because they did manage to find SOMETHING for “sex,” after all. So “lesbian” is by default a term that means “sex,” but “sex” itself is not? NOT FAIR.

While putting together the NSFW Sunday I will, occasionally at the 11th hour, submit myself to a Google Search just to see if maybe they’ve improved, but it’s always 85% useless.

Although Google Instant forgoes my desires altogether, Regular Google does not. These are the search results using “Moderate” filtering — which promises to “filter explicit images only.” Um. Good job with that filtering, guys!

Page Two doesn’t get any more helpful (or gay)

The next step up is “safe” filtering, which promises to exclude “explicit images” and “explicit text.” If you thought the “lesbian sex” moderate search returned decidedly “straight” results — check out the SAFE SEARCH!!!

In conclusion, if you’ve ever wondered why this is true: 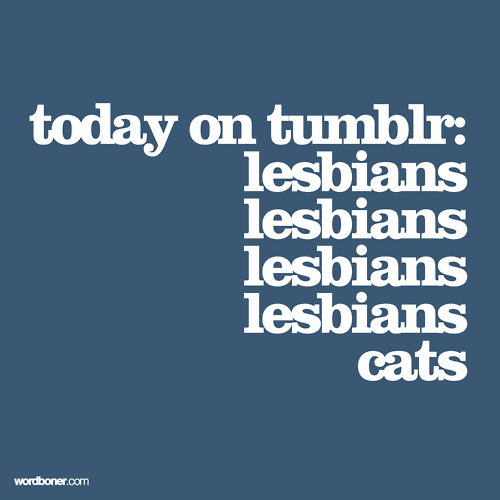 . . . it could be because we’ve given up on The Man ever understanding our desires as anything other than pornographic and, as a result, have created, in effect, our own search engine and information repository: it’s called Tumblr.

Oh and, in case you couldn’t have guessed, google instant isn’t much help there either: 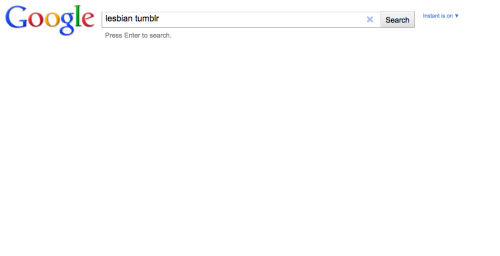