Because my parents both worked while I was growing up, my older sister was tasked with doing a lot more around the house. I’d help where I could — washing dishes, doing laundry and looking out for our younger siblings — but the one area where I absolutely was not permitted to help was with cooking. It was understandable: I was exceptionally bad at it. Every time I’d try to cook, it’d end in disaster: burnt bacon, scalded eggs and the occasional grease fire. It was better for everyone if I stayed away from the hot stove.

Fast forward several years — and plenty of experimentation in the kitchen — and I’ve turned into a pretty good home cook. If we’re gathered for a family dinner nowadays, chances are, I’m cooking the meal. I love being in the kitchen, serving comfort food to those who need comfort. There’s no greater triumph than seeing my usually picky nephews gobble up something I made or the sides I made disappear first at the family BBQ. But, no matter how much time has passed, when my older sister joins us, she approaches my food with trepidation. I’m always going to be that kid who couldn’t scramble eggs.

I thought about that as I watched Callie and Mariana navigate a new facet of their relationship this week on Good Trouble: they’re sisters, best friends, roommates, and now co-workers. I thought about the ways in which the sisters’ view of each other are still shaped by the versions of each other that they saw growing up. In Mariana’s eyes, Callie’s still the troubled kid that Lena rescued from juvenile detention on The Fosters and, to Callie, Mariana’s still the boy-crazed fashionista. Neither of them really appreciate the young woman the other’s grown into… and now that they’re working together, conflict was bound to happen.

Work at the law firm is picking up, as Tommy Sung’s trial rapidly approaches. Thus far, Kathleen Gale and her associates haven’t been able to find a smoking gun to prove Tommy’s innocence so now they’re just looking for a way to establish reasonable doubt. Mariana interrupts the meeting to deliver phone messages for Kathleen and the boss just invites her to stay in the meeting. Witnesses who saw Tommy fighting with Zack before the latter fell/was pushed down the ravine are coming into the office for question and Kathleen pushes her associates to get the witnesses to recant their statements to the police.

The sessions with the witnesses do not go well. Each of the witnesses stick to the story they told the police. Intermittently, Mariana interjects, sending Callie text messages based on her observations on the witness as they come in: one, she suspects, is on steroids, another smokes weeds. While Callie uses some of Mariana’s observations to direct her line of question, she’s mostly dismissive (and annoyed) and it’s clear that she doesn’t think Mariana has anything of value to offer.

Sufficed to say, Kathleen is not pleased with her associates coming up empty during the witness interviews. Only a not guilty verdict for Tommy ensures that his father, Ken Sung, will tell Kathleen where his sister is…a revelation that would, finally, get the FBI off her back…and the pressure is clearly starting to weigh on Kathleen’s shoulders. Jailtime for Tommy almost certainly means jailtime — or worse — for Kathleen too.

“If you don’t have the skills to rattle a few fun facts from a bunch of kids, then you have no business defending anyone,” she yells. “So find something to prove to me that I didn’t make a big mistake taking a chance on the three of you.”

Despite Callie’s skepticism, Mariana’s convinced that Tommy’s ex-girlfriend is hiding something behind her fake tears. Later, she does a deep dive into the witness’ social media and to get some answers. Before the sisters can discover anything, the tension that’s been building between them boils over. Mariana insists that she can do more than filing and answering phones but Callie just admonishes her to keep things professional: keep her personal life out of the office. No more regaling Tony and Rowan about her time in juvenile detention or the time she took a baseball bat to her foster father’s car. 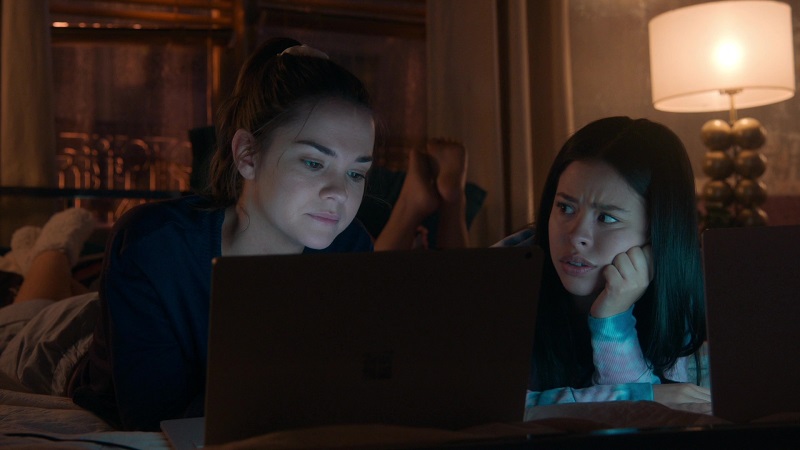 Mariana asks Callie to stop underestimating her and starts to unravel an interesting thread from the witness’ social media accounts: Katie and Zack never followed each other on social media. Mariana notes how unusual it’d be for two high school students — the girlfriend and best friend of the school’s quarterback — to not follow each other and surmises that the two probably didn’t like each other. The revelation is enough to capture Callie’s attention and she joins her sister in the social media deep dive. They track down a hashtag (#LDRZAS) and a fake Instagram account that they believe belongs to Tommy’s girlfriend, Katie. Mariana’s convinced that she’s hiding some incriminating photos from the night of Zack’s death.

Instead of talking to Katie about it, Callie takes Mariana’s suggestion and talks to Katie’s friend, Izzie, about their discoveries. The “sleuthing sisters” conduct the interview together and they work together seamlessly: Callie handles the direct, professional questions, while Mariana tries to build enough of a rapport with Izzie to get her to let guard down. It works, sorta. Izzie reveals that Katie was bothered by the friendship between Tommy and Zack and hadn’t wanted to go to the party that night. Asked about the LDRZAS hashtag — that she’d used in a previous comment — Izzie feigns ignorance. While the sisters don’t get any definitive evidence out of Izzie, there’s enough smoke that they’re both convinced that there’s fire somewhere. Kathleen agrees and commends the team for finding potential evidence that could cast suspicion on Katie.

But, soon after Mariana gains access to Katie’s finista — spotting a photo from the night of the part that shows her looking really unhappy to be there — Katie deletes the account… and suddenly, the Sleuthing Sisters are back to square one.

+ I am, admittedly, uncertain about Malika’s recent foray into polyamory and how it’s playing out on screen. Two things bothered me: first, while Isaac’s abrupt departure — in lieu of a serious conversation with Malika — was a jerk move, the show seems to assign fault to him that I don’t think he’s earned. Isaac and Malika wanted different things from the relationship, that doesn’t make either of them the bad guy. Second, the move from Isaac to Dyonte was so quick….shipping allegiances aside, it felt less like stepping into a genuine relationship and more like stepping inside a FWB situationship.

That said, I think this storyline’s doing some important work: demystifying polyamory in a way that audiences (myself included) need to see. I particularly related to Malika’s admission that she “didn’t want to do poly wrong,” as I think a lot of queer people feel similarly when they come out. I’m glad Malika opted to slow her relationship with Dyonte down and adjust to this new “love-style” at her own pace.

+ We got to go back to school this week with Davia, Andre and Matt. After Andre’s activism is thwarted by the school administration, his mother and Davia huddle together to ensure that Andre fully understands the risks that come with the work he’s chosen to do. The Davia of Season 2 would have insisted that she could do it but, through her work with the equity committee and restorative justice, Davia recognizes that she’s not the best mentor for Andre. Instead, she reaches out to Malika who takes Andre to a Students Deserve meeting where he thrives. It’s a testament to both of their characters’ growth over the last season.

And while I remain committed to the Davia/Dennis ship, Matt continues to grow on me. Why shouldn’t Davia have someone who’s not ambivalent about liking her…and someone who appreciates a good sweet tea?

+ After thwarting Gael and Callie’s previous attempts at romance, however unwittingly, Isabella works with Mariana this week to set up a romantic breakfast date for the couple. Between that and the paternity test results proving Gael’s about to become a father, it seems like Isabella is living up to her promise of being a good person this time around. I’m still weary but I kinda want to trust her?