Back downstairs, Kurt and Blaine duet on Betty Who‘s “Somebody Loves You” and the props come out and it’s all feather boas and pink cowboy hats and astronaut helmets and angel wings and scepters and lightsabers and True Love. Blaine leaves right after the duet because he and Dave have to get up early to go to a football game the next morning, but Kurt walks him out so they can talk about the history of their duets/relationship. They chat easily about how they got together despite Blaine’s crush on some guy whose name neither of them can remember. Kurt starts to say something about the fleeting, ephemeral nature of affection, but Blaine shushes him right the heck up by grabbing his hips and leaning into him and smooching him right on his mouth. He runs off without saying anything and Kurt woozily weaves his way to the sidewalk to watch Blaine flee. 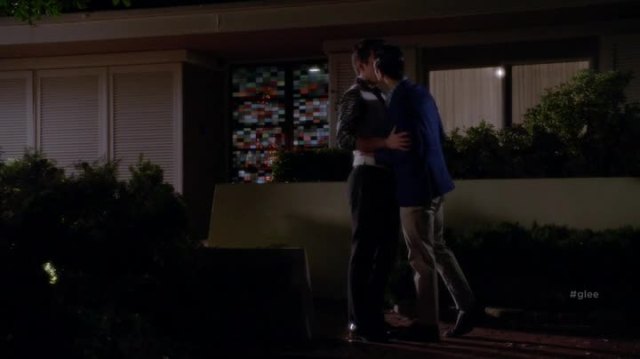 Omelette you finish but first I’m gonna scramble your brains. 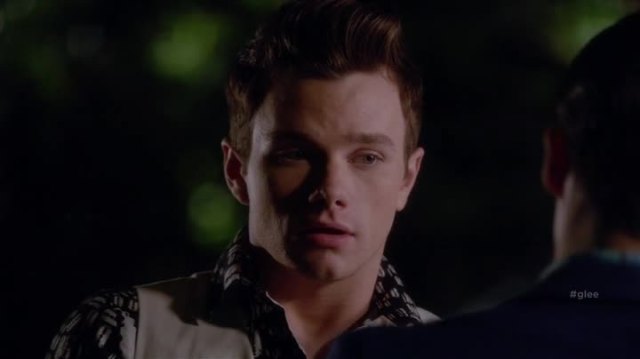 Rachel and Sam duet on “Time After Time” in a montage that includes everybody packing up Rachel’s childhood bedroom and putting her wall photos into a leather-bound album where they become GIFs of the show’s earlier seasons. It’s a cheesy, sweet trick that made me a little bit teary, I’ll tell you the truth.

In the McKinley High locker room, Unique appears from the shadows like an angel to talk to Coach Bieste about coming out as trans. Unique has a grace I cannot even fathom. If I were her, and this school treated me the way it treated her, with that fucking Riddler bathroom and all the transphobic jokes and goddamn Will Schuester, I wouldn’t come back here unless it was to rain down brimstone from the back of a flying shade wolf. But not Unique! She wields only aplomb, not only pep-talking Bieste about how his differences make him special, but also assuring him he’s not alone, a thing she will prove to him if he’ll just come to the auditorium with her. 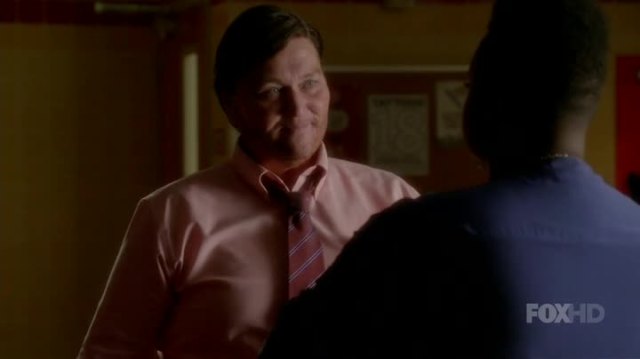 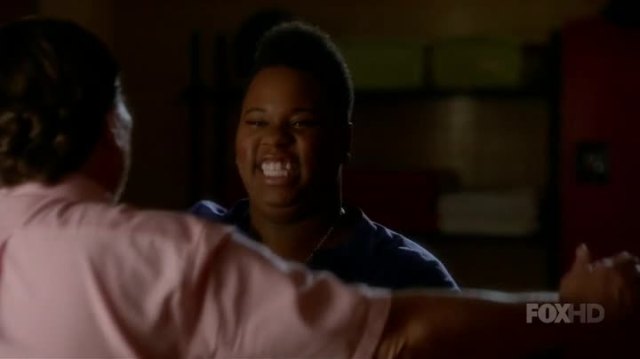 Meanwhile, two completely not-believable things: 1) Will tells Vocal Adrenaline he’s going to help them hecka prank New Directions tonight, so dress like A and come with him to McKinley. 2) The apartment Blaine and Karofsky share.

I mean, I get it, Blaine was trying to recreate with Dave what he had with Kurt, but no way he ever would have moved in with this guy. And Dave knows it. That’s how come when Blaine spills the beans about snogging his old beau, Dave goes, “Yeah, that was inevitable, but it was fun dating you for a little while!” I think the point here is that when Karofsky conquered his internal homophobia by coming out, his rage went away. And the best way to make up for the bullying he did to Kurt is to not put up a fight when the love of Kurt’s life wants him back. So, okay, I suppose. 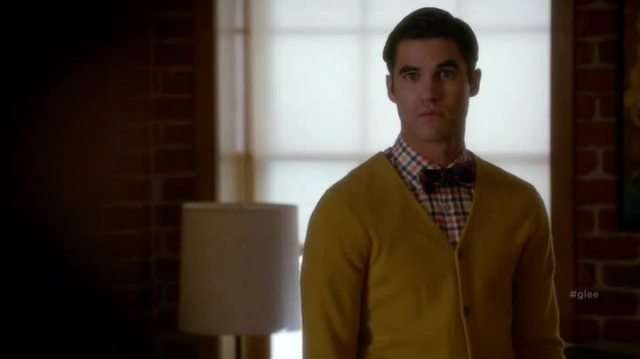 I’ll send three U-Hauls for my bowties and cardigans.

Anyway, Blaine runs like a wild thing to McKinley, down the halls, and stops short when he finds Kurt and Aaron Echolls getting ready to go on a double date with Rachel and Sam. Kurt says Blaine should bring Dave next time, for a triple date, and Blaine says yeah okay and throws up.

What Will leads Vocal Adrenaline to at McKinley is an ambush of love. It is Unique singing “I Know Where I’ve Been” for Coach Bieste with a trans choir of 200 people! Coach Bieste joins them and sings and cries and everyone holds hands. This motherfucking goddamn show. Making me want to spit fire one week and making me cry like an inconsolable little baby the next week. I have watched this five times and sobbed every time. It’s Coach Bieste finding out that he’s not alone, that there’s this whole giant community ready to support him; but more than that, it’s this slick misdirection where you think Rachel & Co. (or, horribly, Will) are going to rush on stage to do that thing they always do (horrible Will, especially), like with the deaf choir, but then the curtain goes up and it’s trans folks speaking to a trans person about trans experience, with Unique in the spotlight — literally and metaphorically — the whole time. 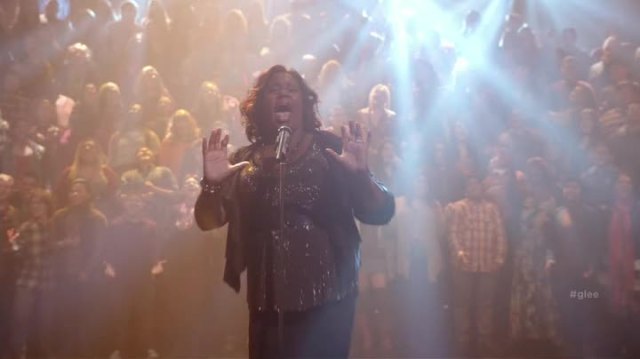 Everyone board the bus and get out of here before the show fucks it all up! 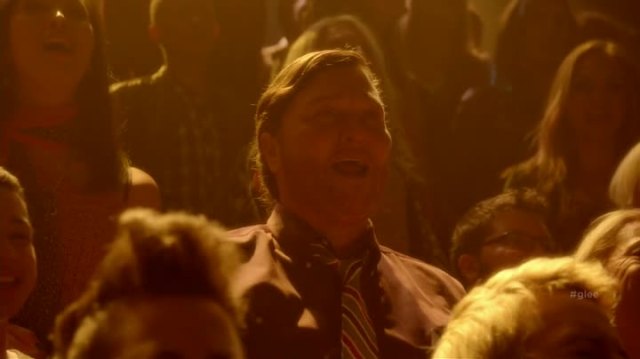 I can fit six people in my SUV!

Season six is Glee‘s apology tour, and of course the show has borked that up because it can’t even say “I’m sorry” without flipping you off in the next breath. But Riese was saying yesterday that we should take some time to celebrate the actually really wonderful, groundbreaking things this show has done for the queer community. And I think this moment was one of the best.

Sue adds to the ambush of love with an ambush of angry dogs, chasing Vocal Adrenaline back to Carmel High to think about how they suck as human beings.

Unsurprisingly, Will quits his job and joins Kurt and Rachel as the coaches of New Directions. He’s not back in the position for three seconds before he starts condescending to them about What Really Matters when you’re a teacher and calling them his best friends.