Previously on Glee, Brittany tried to convince Santana’s grandma to reconcile her centuries old religious piety with her modern day love for her lesbian granddaughter and RSVP to their gay wedding, but Santana’s grandma couldn’t/wouldn’t do it. Kurt and Blaine continued to be in deep and abiding love with each other but kept telling themselves they were only kissing for “science” and so “Sue’s demonic murder puppet didn’t chop them into pieces.” Mercedes came to town and pep talked Rachel into trying out for a new Broadway show because Rachel + NYC = OTP. And but most importantly, there was an Emma Pillsbury stunt double that we only ever got to see from behind and it was one of the top ten moments in Glee history, easy.

Will Schuester is livin’ The Life, y’all. Being the coach of Vocal Adrenaline means that he’s got a massage therapist, a nutritionist, a company car, a million dollar paycheck, sweater vests made of real gold, champagne in his coffee mug, sharks in his swimming pool. And best of all, he doesn’t even have to come up with lessons on the spot anymore because Vocal Adrenaline starts and finishes practice before he ever even arrives at Carmel High. Unfortunately, The Life is not everything Will thought it would be. Sure, he was poor at McKinley and Sue was always trying to systematically destroy his life, but at least he felt like he was making a difference with New Directions. He tells Emma he wants to figure out how to have all the money and power and get treated like a hero for his insufferable and mostly offensive lessons on morality. She tells him to become a United States Congressman. 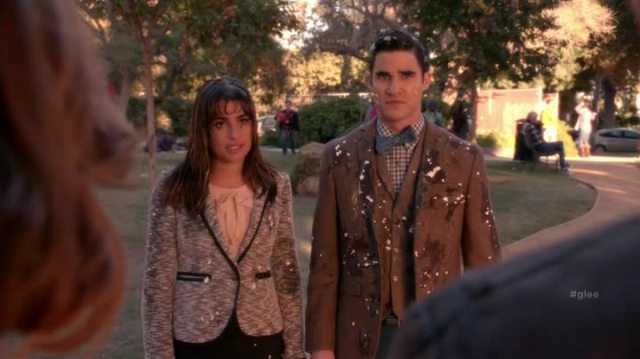 Haha. Eggsterminate. Very funny. I look like Doctor Who, I get it.

Their conversation is derailed when Blaine and Rachel show up at the park covered in breakfast. Turns out the Vocal Adrenaline kids ambushed them in the parking lot with eggs like the Jessie St. James-led days of yore. Like some hoodlums from an ’80s movie about karate, or dancing your truth. 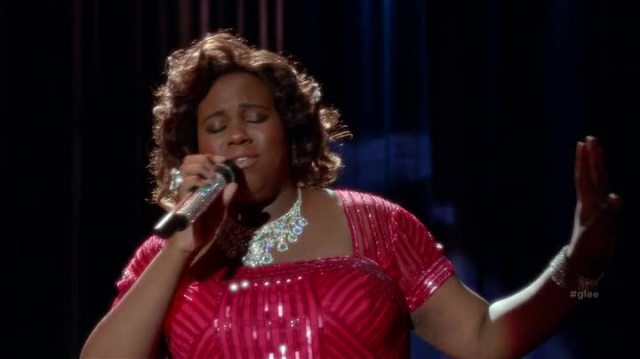 Listen up, fives. A ten is talking.

Mr. Schue decides to teach Vocal Adrenaline a lesson by singing “Same Love” and it’s as awkward as you’re imagining, and only made bearable by the voice and presence of Unique, who walks onto stage looking fierce as hell and warming the cold, cynical cockles of my Gleecapping heart. Unique! I thought you were gone forever! Vocal Adrenaline doesn’t care, though. About Unique or Will or having a soul or not being 45 years old and in high school. The leader of the group — an elderly man named Clint whose accent keeps changing from like Australian to a caricature of a person from to the Bronx to maybe Ukranian to Bostonian back to Australian — is inspired by Will and Unique’s performance. He says they’ll stage some kind of intolerant act to sabotage New Directions’ preparation for Regionals. 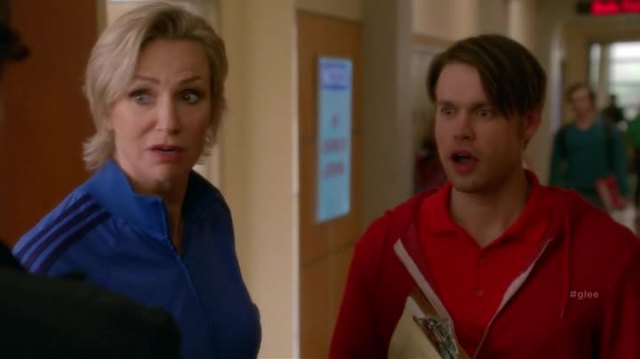 Have you heard the latest teenage gossip? Do you want to get over-involved in it? 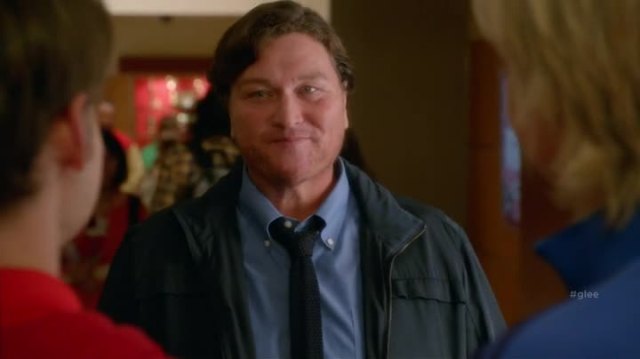 I transitioned. I didn’t get Will Schuetser’s brain transplanted into my head.

Coach Bieste returns to McKinley, presenting as male, and is met in the hallway by Sam, who is eager to begin guy talk with Sheldon immediately. Topics include: His crush on Rachel. His crush on Mercedes. The list of pronouns he wrote down to make sure he doesn’t misgender his favorite football coach. Bieste feeds him a treat and pets him behind the ears until he falls asleep on the floor, all tuckered out from such an exciting morning. Sue also meets Bieste when he arrives, wrapping an arm around him and talking about how she has destroyed the scourge of cis-normativity and trans misogyny at this school because she has always stood firmly against bullying. (HA!) And then she scampers off to do the morning McKinley High fat-shaming ritual.

As promised, Vocal Adrenaline shows up to act like a bunch of assholes, covering Beiste’s car with jock straps and spelling out slurs and screaming ignorant, offensive shit at him. So Sue calls Will into her office to explain the situation. And Will apologizes and promises that no one gets away with going after his friends. And Sue LOLs at that because she’s been going after his friends and getting away with it since literally the pilot episode. 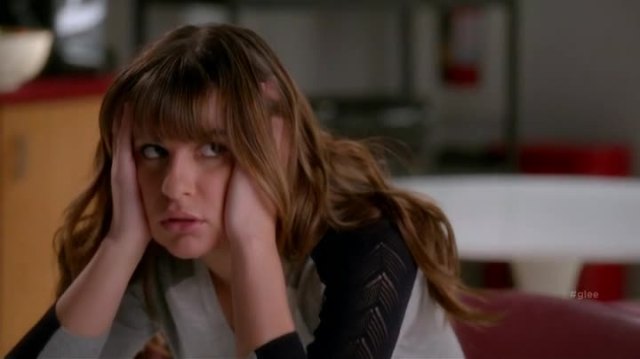 Honestly, is anyone even going to watch this show after Brittany and Santana’s wedding is over?

Rachel’s Dads sold her childhood home, despite the fact that she has been actively sabotaging all the realtors by dressing up as that woman from The Ring and hanging around in the shower growling. She is kind of losing her mind about it. In the teacher’s lounge, Sam tries to explain that home isn’t really where the house is, and he should know because there were plenty of times when he was living out of his car, but Rachel will not let him shame her into feeling guilty about moving from one fancy house to another fancy house just because he was a homeless teenager who was forced to strip to buy food for his family at one point. #ThatsSoRachel

And so Sam calls for an intervention hosted by himself and Kurt in Rachel’s basement to help her let go of being a child and embrace being a grown-up. Mercedes rolls her eyes like a Liz Lemon, but agrees to join in on the shenanigans. Artie too. And Blaine. There’s no explanation for why these three are hanging out at their old high school but the current students have accepted it as fact and have stopped asking about it. When Kurt announces in choir practice that afternoon that this week’s lesson is about helping Rachel move past her hangups and transition into adulthood, the kids are like, “So, this week’s lesson is for … Rachel?” 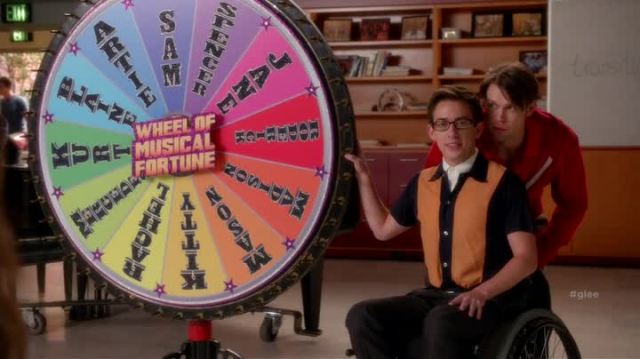 Psst, you’re the only character on this show who hasn’t had a crush on me. What’s up?

Clint’s plan worked! All Vocal Adrenaline had to do was commit a hate crime against a trans teacher at McKinley and immediately New Directions stopped preparing for their upcoming competition and began practicing songs about a how the theme of that crime is very loosely related to a thing going on in the life of their teacher! Diabolical!